1 When a man takes a wife and marries her, then it shall be, if she finds no favor in his eyes because he has found some unseemly thing in her, that he shall write her a certificate of divorce, put it in her hand, and send her out of his house.

2 When she has departed out of his house, she may go and be another man’s wife. 3 If the latter husband hates her, and writes her a certificate of divorce, puts it in her hand, and sends her out of his house; or if the latter husband dies, who took her to be his wife; 4 her former husband, who sent her away, may not take her again to be his wife after she has been defiled; for that would be an abomination to the Lord. You shall not cause the land to sin, which the Lord your God is giving you as an inheritance. 5 When a man takes a new wife, he shall not go out in the army, neither shall he be assigned any business. He shall be free at home one year, and shall cheer his wife whom he has taken.

6 No man shall take the mill or the upper millstone as a pledge, for he takes a life in pledge. 7 If a man is found stealing any of his brothers of the Israelites, and he deals with him as a slave, or sells him, then that thief shall die. So you shall remove the evil from among you. 8 Be careful in the plague of leprosy, that you observe diligently and do according to all that the Levitical priests teach you. As I commanded them, so you shall observe to do. 9 Remember what the Lord your God did to Miriam, by the way, as you came out of Egypt.

10 When you lend your neighbor any kind of loan, you shall not go into his house to get his pledge. 11 You shall stand outside, and the man to whom you lend shall bring the pledge outside to you. 12 If he is a poor man, you shall not sleep with his pledge. 13 You shall surely restore to him the pledge when the sun goes down, that he may sleep in his garment and bless you. It shall be righteousness to you before the Lord your God.

14 You shall not oppress a hired servant who is poor and needy, whether he is one of your brothers or one of the foreigners who are in your land within your gates. 15 In his day you shall give him his wages, neither shall the sun go down on it; for he is poor and sets his heart on it; lest he cry against you to the Lord, and it be sin to you.

17 You shall not deprive the foreigner or the fatherless of justice, nor take a widow’s clothing in pledge; 18 but you shall remember that you were a slave in Egypt, and the Lord your God redeemed you there. Therefore I command you to do this thing.

21 When you harvest your vineyard, you shall not glean it after yourselves. It shall be for the foreigner, for the fatherless, and for the widow. 22 You shall remember that you were a slave in the land of Egypt. Therefore I command you to do this thing.

1 If there is a controversy between men, and they come to judgment and the judges judge them, then they shall justify the righteous and condemn the wicked. 2 It shall be, if the wicked man is worthy to be beaten, that the judge shall cause him to lie down and to be beaten before his face, according to his wickedness, by number. 3 He may sentence him to no more than 40 stripes. He shall not give more, lest if he should give more and beat him more than that many stripes, then your brother will be degraded in your sight.

4 You shall not muzzle the ox when he treads out the grain.

5 If brothers dwell together, and one of them dies and has no son, the wife of the dead shall not be married outside to a stranger. Her husband’s brother shall go in to her, and take her as his wife, and perform the duty of a husband’s brother to her. 6 It shall be that the firstborn whom she bears shall succeed in the name of his brother who is dead, that his name not be blotted out of Israel.

11 When men strive against each other, and the wife of one draws near to deliver her husband out of the hand of him who strikes him, and puts out her hand, and grabs him by his private parts, 12 then you shall cut off her hand. Your eye shall have no pity.

17 Remember what Amalek did to you along the way as you came out of Egypt; 18 how he met you by the way, and struck the rearmost of you, all who were feeble behind you, when you were faint and weary; and he did not fear the Lord. 19 Therefore it shall be, when the Lord your God has given you rest from all your enemies all around, in the land which the Lord your God is giving you as an inheritance to possess, that you shall blot out the memory of Amalek from under the sky. You shall not forget.

38 As they went on their way, Jesus entered into a certain village, and a certain woman named Martha received him into her house. 39 She had a sister called Mary, who also sat at Jesus’ feet, and heard his word. 40 But Martha was distracted with much serving, and she came up to him, and said, “Lord, don’t you care that my sister left me to serve alone? Ask her therefore to help me.”

41 Jesus answered her, “Martha, Martha, you are anxious and troubled about many things, 42 but one thing is needed. Mary has chosen the good part, which will not be taken away from her.”

1 When he finished praying in a certain place, one of his disciples said to him, “Lord, teach us to pray, just as John also taught his disciples.”

2 He said to them, “When you pray, say,
‘Father, may your holy name be revered.
May your Kingdom come.
May your will be done on earth, as it is in heaven.

3 Give us day by day our daily bread.

4 Forgive us our sins,
for we ourselves also forgive everyone who is indebted to us.
Bring us not into temptation,
but deliver us from the evil one.’ ” 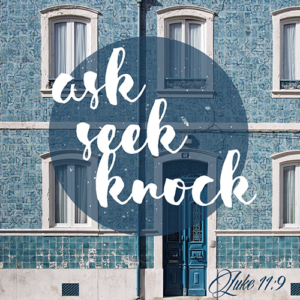 5 He said to them, “Which of you, if you go to a friend at midnight, and tell him, ‘Friend, lend me three loaves of bread, 6 for a friend of mine has come to me from a journey, and I have nothing to set before him,’ 7 and he from within will answer and say, ‘Don’t bother me. The door is now shut, and my children are with me in bed. I can’t get up and give it to you’?

For the Chief Musician. On stringed instruments. A Psalm by Asaph. A song.

1 In Judah, God is known.
His name is great in Israel.
2 His tabernacle is also in Salem;
His dwelling place in Zion.
3 There he broke the flaming arrows of the bow,
the shield, and the sword, and the weapons of war.
Selah.
4 Glorious are you, and excellent,
more than mountains of game.
5 Valiant men lie plundered,
they have slept their last sleep.
None of the men of war can lift their hands.
6 At your rebuke, God of Jacob,
both chariot and horse are cast into a dead sleep.
7 You, even you, are to be feared.
Who can stand in your sight when you are angry?
8 You pronounced judgment from heaven.
The earth feared, and was silent,
9 when God arose to judgment,
to save all the afflicted ones of the earth.
Selah.
10 Surely the wrath of man praises you.
The survivors of your wrath are restrained.
11 Make vows to the Lord your God, and fulfill them!
Let all of his neighbors bring presents to him who is to be feared.
12 He will cut off the spirit of princes.
He is feared by the kings of the earth.

15 The way of a fool is right in his own eyes,
but he who is wise listens to counsel.
16 A fool shows his annoyance the same day,
but one who overlooks an insult is prudent.
17 He who is truthful testifies honestly,
but a false witness lies.