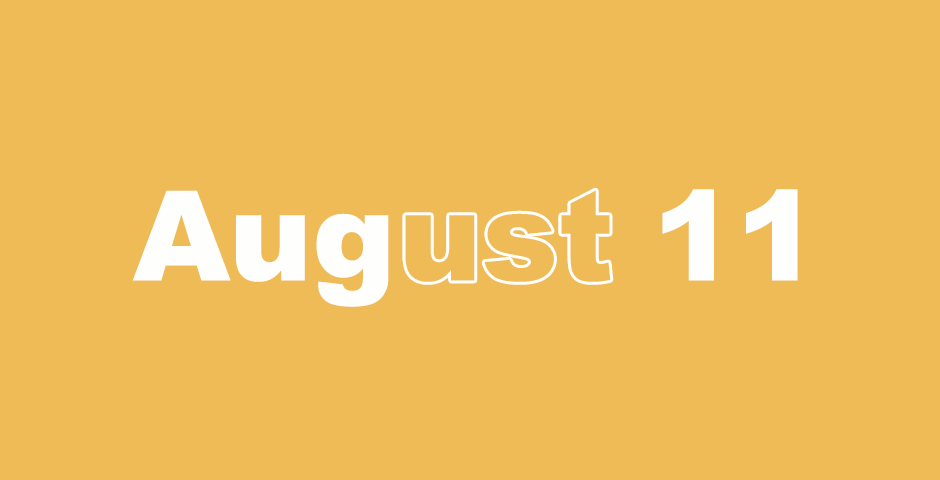 1 The words of Nehemiah the son of Hacaliah:

Now in the month Chislev, in the twentieth year, as I was in Susa the palace, 2 Hanani, one of my brothers, came, he and certain men out of Judah; and I asked them about the Jews who had escaped, who were left from the captivity, and concerning Jerusalem. 3 They said to me, “The remnant who are left from the captivity there in the province are in great affliction and reproach. The wall of Jerusalem is also broken down, and its gates have been burned down.”

4 When I heard these words, I sat down and wept, and mourned several days, and I fasted and prayed before the God of heaven,5 and said,

“I beg you, O Lord, God of heaven, the great and awesome God, who keeps covenant and loving kindness with those who love him and keep his commandments: 6 Let your ear now be attentive and your eyes open, that you may listen to the prayer of your servant, which I am praying before you at this time, day and night, for the Israelites your servants.

I confess the sins of the Israelites, which we have committed against you. Yes, I and my father’s house have sinned. 7 We have dealt very corruptly against you and have not kept the commandments, nor the statutes, nor the ordinances, which you commanded your servant Moses.

8 “Remember, I beg you, the word that you commanded your servant Moses, saying, ‘If you trespass, I will scatter you among the peoples, 9 but if you return to me and keep my commandments and do them, though your outcasts were in the uttermost parts of heaven, yet I will gather them from there and will bring them to the place that I have chosen, to cause my name to dwell there.’

Now I was cup bearer to the king.

1 In the month Nisan, in the twentieth year of Artaxerxes the king, when wine was before him, I picked up the wine and gave it to the king. Now I had not been sad before in his presence. 2 The king said to me, “Why is your face sad, since you are not sick? This is nothing else but sorrow of heart.”

Then I was very much afraid. 3 I said to the king, “Let the king live forever! Why shouldn’t my face be sad, when the city, the place of my fathers’ tombs, lies waste, and its gates have been destroyed by fire?”

4 Then the king said to me, “What is your request?”

So I prayed to the God of heaven. 5 I said to the king, “If it pleases the king, and if your servant has found favor in your sight, that you would send me to Judah, to the city of my fathers’ tombs, so I may build it.”

6 The king said to me (the queen was also sitting by him), “How long will your journey be? When will you return?”

So it pleased the king to send me, and I set a time for him. 7 Moreover I said to the king, “If it pleases the king, let letters be given to me to the governors beyond the River, that they may let me pass through until I come to Judah, 8 and a letter to Asaph the keeper of the king’s forest, that he may give me timber to make beams for the gates of the citadel by the temple, for the wall of the city, and for the house that I will occupy.”

The king granted my requests, because of the good hand of my God on me.

9 Then I came to the governors beyond the River and gave them the king’s letters. Now the king had sent captains of the army and horsemen with me. 10 When Sanballat the Horonite, and Tobiah the servant, the Ammonite, heard of it, it grieved them exceedingly, because a man had come to seek the welfare of the Israelites.

11 So I came to Jerusalem, and was there three days. 12 I arose in the night, I and a few men with me. I did not tell anyone what my God put into my heart to do for Jerusalem. There was not any animal with me, except the animal on which I rode.

13 I went out by night by the valley gate, toward the jackal’s well, then to the dung gate, and inspected the walls of Jerusalem, which were broken down, and its gates had been destroyed by fire.

14 Then I went on to the spring gate and to the king’s pool, but there was no place for the animal that was under me to pass.

15 Then I went up in the night by the brook, and inspected the wall, and I turned back and entered by the valley gate, and so returned. 16 The rulers did not know where I went or what I did. I had not as yet told it to the Jews, nor to the priests, nor to the nobles, nor to the rulers, nor to the rest who did the work.

17 Then I said to them, “You see the bad situation that we are in, how Jerusalem lies waste, and its gates have been burned down. Come, let’s build up the wall of Jerusalem, that we will not be disgraced.”

18 I told them of the hand of my God which was good upon me, as also of the king’s words that he had spoken to me.

They said, “Let’s rise up and build.”

So they strengthened their hands for the good work.

19 But when Sanballat the Horonite, Tobiah the Ammonite servant, and Geshem the Arabian, heard it, they ridiculed us and despised us and said, “What is this thing that you are doing? Will you rebel against the king?”

20 Then I answered them and said to them, “The God of heaven will prosper us. Therefore we, his servants, will arise and build, but you have no portion, nor right, nor memorial, in Jerusalem.”

1 Now concerning the things about which you wrote to me: it is good for a man not to touch a woman. 2 But, because of sexual immoralities, let each man have his own wife, and let each woman have her own husband. 3 Let the husband give his wife the affection owed her, and likewise also the wife her husband. 4 The wife does not have authority over her own body, but the husband. Likewise also the husband does not have authority over his own body, but the wife. 5 Do not deprive one another, unless it is by mutual consent for a season, that you may give yourselves to fasting and prayer, and may be together again, that Satan does not tempt you because of your lack of self-control. 6 But this I say by way of concession, not of commandment. 7 Yet I wish that all men were like me. However each man has his own gift from God, one of this kind, and another of that kind.

A Word to Singles

8 But I say to the unmarried and to widows, it is good for them if they remain as I am. 9 But if they do not have self-control, let them marry. For it is better to marry than to burn with passion. 10 But to the married I command—not I, but the Lord—that the wife not leave her husband 11 (but if she departs, let her remain unmarried, or else be reconciled to her husband), and that the husband not leave his wife.

12 But to the rest I—not the Lord—say, if any brother has an unbelieving wife, and she is content to live with him, let him not leave her. 13 The woman who has an unbelieving husband, and he is content to live with her, let her not leave her husband. 14 For the unbelieving husband is sanctified in the wife, and the unbelieving wife is sanctified in the husband. Otherwise your children would be unclean, but now they are holy. 15 Yet if the unbeliever departs, let there be separation. The brother or the sister is not under bondage in such cases, but God has called us in peace. 16 For how do you know, wife, whether you will save your husband? Or how do you know, husband, whether you will save your wife?

Live According to Your Calling

17 Only, as the Lord has distributed to each man, as God has called each, so let him walk. So I command in all the assemblies. 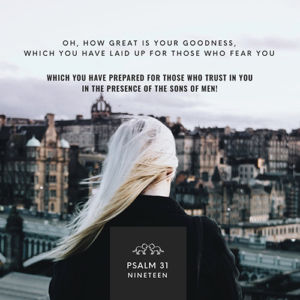 19 Oh how great is your goodness,
which you have laid up for those who fear you,
which you have worked for those who take refuge in you,
before the sons of men!
20 In the shelter of your presence you will hide them from the plotting of man.
You will keep them secretly in a dwelling away from the strife of tongues.

21 Praise be to the Lord,
for he has shown me his marvelous loving kindness in a strong city.
22 As for me, I said in my haste, “I am cut off from before your eyes.”
Nevertheless you heard the voice of my petitions when I cried to you.

23 Oh love the Lord, all you his saints!
The Lord preserves the faithful,
and fully repays him who behaves arrogantly.
24 Be strong, and let your heart take courage,
all you who hope in the Lord.

4 A high look and a proud heart,
the lamp of the wicked, is sin.