He who goes about as a tale-bearer reveals secrets, therefore do not keep company with one who opens wide his lips. Proverbs 20:19

1 Josiah was eight years old when he began to reign, and he reigned for 31 years in Jerusalem. 2 He did that which was right in the eyes of the Lord, and walked in the ways of David his father, and did not turn away to the right or to the left.

6 He did this in the cities of Manasseh, Ephraim, and Simeon, to Naphtali, around in their ruins. 7 He broke down the altars, and beat the Asherah poles and the engraved images into powder, and cut down all the incense altars throughout the land of Israel, then returned to Jerusalem.

8 Now in the eighteenth year of his reign, when he had purged the land and the house, he sent Shaphan the son of Azaliah, and Maaseiah the governor of the city, and Joah the son of Joahaz the recorder, to repair the house of the Lord his God.

9 They came to Hilkiah the high priest, and delivered the money that was brought into the house of the Lord, which the Levites, the keepers of the threshold, had gathered from the hands of Manasseh, Ephraim, of all the remnant of Israel, of all Judah and Benjamin, and of the inhabitants of Jerusalem. 10 They delivered it into the hands of the workmen who had the oversight of the house of the Lord, and the workmen who labored in the house of the Lord gave it to mend and repair the house. 11 They gave it to the carpenters and to the builders, to buy cut stone and timber for couplings, and to make beams for the houses which the kings of Judah had destroyed.

Hilkiah Finds the book of the Law

16 Shaphan carried the book to the king, and moreover brought back word to the king, saying, “All that was committed to your servants, they are doing. 17 They have emptied out the money that was found in the house of the Lord, and have delivered it into the hand of the overseers, and into the hand of the workmen.” 18 Shaphan the scribe told the king, saying, “Hilkiah the priest has delivered a book to me,” and Shaphan read from it before the king.

19 When the king had heard the words of the law, he tore his clothes. 20 The king commanded Hilkiah, Ahikam the son of Shaphan, Abdon the son of Micah, Shaphan the scribe, and Asaiah the king’s servant, saying, 21 “Go inquire of the Lord for me and for those who are left in Israel and in Judah, concerning the words of the book that is found, for great is God’s wrath that is poured out on us because our fathers have not kept the word of the Lord, to do according to all that is written in this book.”

22 So Hilkiah, and those whom the king had commanded, went to Huldah the prophetess, the wife of Shallum the son of Tokhath, the son of Hasrah, keeper of the wardrobe (now she lived in Jerusalem in the second quarter), and they spoke to her to that effect. 23 She said to them, “Lord, the God of Israel says: ‘Tell the man who sent you to me, 24 “The Lord says, ‘I will bring disaster on this place, and on its inhabitants, all the curses that are written in the book which they have read before the king of Judah 25 because they have forsaken me, and have burned incense to other gods, provoking me to anger with all the works of their hands. Therefore my wrath is poured out on this place, and it will not be quenched.’ ” ’

26 But to the king of Judah, who sent you to inquire of the Lord, you shall tell him this, ‘The Lord, the God of Israel says, “About the words which you have heard, 27 because your heart was tender, and you humbled yourself before the Lord, when you heard his words against this place, and against its inhabitants, and have humbled yourself before me, and have torn your clothes, and wept before me, I also have heard you,” says the Lord. 28 “I will gather you to your fathers, and you will be gathered to your grave in peace. Your eyes will not see all the disaster that I will bring on this place and on its inhabitants.” ’ ”

They brought word back to the king.

29 Then the king sent for all the elders of Judah and Jerusalem and gathered them together. 30 The king went up to the house of the Lord, with all the men of Judah and the inhabitants of Jerusalem, the priests, the Levites, and all the people, both great and small; and he read in their hearing all the words of the book of the covenant that was found in the house of the Lord.

31 The king stood in his place and made a covenant before the Lord, to walk after the Lord, and to keep his commandments, and his testimonies, and his statutes, with all his heart, and with all his soul, to apply the words of the covenant that were written in this book.

32 He caused all who were found in Jerusalem and Benjamin to stand. The inhabitants of Jerusalem did according to the covenant of the Lord, the God of their fathers.

33 Josiah took all the abominations out of all the countries that belonged to the Israelites, and made everyone in Israel serve the Lord their God. All his days they did not depart from following the Lord, the God of their fathers.

17 Now I beg you, brothers, watch out for those who are causing divisions and stumbling blocks, in opposition to the doctrine which you learned, and turn away from them. Avoid them, 18 for those who are like this do not serve our Lord, Jesus Christ, but their own appetites. By their smooth and flattering speech they deceive the hearts of the innocent 19 For your obedience has become known to all. I rejoice therefore over you. But I want you to be wise in that which is good, but innocent in that which is evil. 20 And the God of peace will quickly crush Satan under your feet.

The grace of our Lord Jesus Christ be with you.

21 Timothy, my fellow worker, greets you, as do Lucius, Jason, and Sosipater, my relatives.

22 I, Tertius, who write the letter, greet you in the Lord.

23 Gaius, my host and the host of the whole assembly, greets you. Erastus, the treasurer of the city, greets you, as does Quartus, our brother.

24 The grace of our Lord Jesus Christ be with you all! Amen.

25 Now to him who is able to establish you according to my Good News and preaching of Jesus Christ, according to the revelation of the mystery which has been kept secret through long ages, 26 but now is revealed, and by the Scriptures of the prophets, according to the commandment of the eternal God, is made known for obedience of faith to all the nations, 27 to the only wise God, through Jesus Christ, to whom be the glory forever! Amen.

1 Vindicate me Lord, for I have walked in integrity.
I have trusted also in the Lord without wavering.
2 Examine me, Lord, and prove me.
Try my heart and my mind.
3 For your loving kindness is before my eyes.
I have walked in your truth.
4 I have not sat with deceitful men,
neither will I go in with hypocrites.

5 I hate the assembly of evildoers,
and will not sit with the wicked.
6 I will wash my hands in innocence,
so I will go about your altar, Lord,
7 that I may make the voice of thanksgiving heard
and tell of all your wondrous deeds.

8 Lord, I love the dwelling of your house,
the place where your glory dwells.
9 Do not gather my soul with sinners,
nor my life with bloodthirsty men;
10 in whose hands is wickedness,
their right hand is full of bribes.

11 But as for me, I will walk in my integrity.
Redeem me, and be merciful to me.
12 My foot stands in an even place.
In the congregations I will bless the Lord. 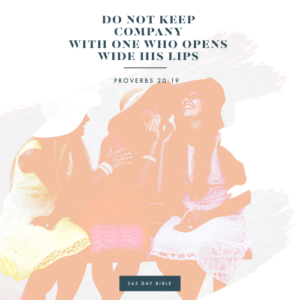 19 He who goes about as a tale-bearer reveals secrets;
therefore do not keep company with one who opens wide his lips.