Now I beg you, brothers, through the name of our Lord, Jesus Christ, that all of you declare the same message and that there be no divisions among you, but that you be united with the same mind and purpose. 1 Corinthians 1:10

1 Josiah kept a Passover to the Lord in Jerusalem, and they killed the Passover on the fourteenth of the first month. 2 He set the priests in their offices and encouraged them in the service of the house of the Lord.

7 Josiah gave to the people, lambs and young goats from the flock, all for Passover offerings, for all who were present, to the count of 30,000, as well as 3,000 cattle, which were from the King’s own flocks. 8 His officials gave, as a free will offering to the people for the Passover offering, to the priests, and to the Levites. Hilkiah, Zechariah, and Jehiel, the rulers of the house of the Lord, 2,600 small livestock and 300 head of cattle. 9 Conaniah also, and Shemaiah and Nethanel, his brothers, and Hashabiah, Jeiel, and Jozabad, the chiefs of the Levites, gave to the Levites for the Passover offerings 5,000 small livestock and 500 head of cattle.

10 So the service was prepared, and the priests stood in their place, and the Levites by their divisions, according to the king’s commandment. 11 They killed the Passover, and the priests sprinkled the blood which they received of their hand, and the Levites skinned them. 12 They removed the burnt offerings, that they might give them according to the divisions of their ancestral houses of the lay people, to offer to the Lord, as it is written in the book of Moses. They did the same with the cattle. 13 They roasted the Passover with fire according to the ordinance. They boiled the holy offerings in pots, in cauldrons, and in pans, and carried them quickly to all the people. 14 Afterward they prepared for themselves and for the priests, because the priests, the descendants of Aaron, were busy with offering the burnt offerings and the fat until night. Therefore the Levites prepared for themselves and for the priests, the descendants of Aaron. 15 The singers the descendants of Asaph were in their place, according to the commandment of David, Asaph, Heman, and Jeduthun the king’s seer, and the gatekeepers were at every gate. They did not need to depart from their service, because their brothers the Levites prepared for them.

16 So all the service of the Lord was prepared the same day, to keep the Passover, and to offer burnt offerings on the altar of the Lord, according to the commandment of king Josiah.

17 The Israelites who were present kept the Passover at that time, and the feast of unleavened bread seven days. 18 There had not been a Passover like that kept in Israel from the days of Samuel the prophet, nor did any of the kings of Israel keep such a Passover as Josiah kept, with the priests, the Levites, and all Judah and Israel who were present, and the inhabitants of Jerusalem. 19 This Passover was kept in the eighteenth year of the reign of Josiah.

20 After all this, when Josiah had prepared the temple, Neco king of Egypt went up to fight against Carchemish by the Euphrates, and Josiah went out against him. 21 But he sent ambassadors to him, saying, “What have I to do with you, you king of Judah? I come not against you today, but against the house with which I am waging war. The Lord has commanded me to be quick. Beware that it is the Lord who is with me, that he not destroy you.”

22 Nevertheless Josiah would not turn his face from him, but disguised himself, that he might fight with him, and did not listen to the words of Neco from the mouth of God, and came to fight in the valley of Megiddo. 23 The archers shot at king Josiah, and the king said to his servants, “Take me away because I am gravely wounded!”

24 So his servants took him out of the chariot and put him in the second chariot that he had and brought him to Jerusalem, and he died and was buried in the tombs of his fathers. All Judah and Jerusalem mourned for Josiah.

1 Then the people of the land took Jehoahaz the son of Josiah and made him king in his father’s place in Jerusalem. 2 Joahaz was 23 years old when he began to reign, and he reigned three months in Jerusalem. 3 The king of Egypt removed him from office at Jerusalem and fined the land 7,500 pounds of silver and 75 pounds of gold. 4 The king of Egypt made Eliakim his brother king over Judah and Jerusalem and changed his name to Jehoiakim. But Neco took Joahaz his brother and carried him off to Egypt.

5 Jehoiakim was 25 years old when he began to reign, and he reigned eleven years in Jerusalem. He did that which was evil in the sight of the Lord his God. 6 Nebuchadnezzar king of Babylon came up against him and bound him in fetters to take him to Babylon. 7 Nebuchadnezzar also took some of the vessels of the house of the Lord to Babylon and put them in his temple at Babylon. 8 Now the rest of the acts of Jehoiakim and the abominations which he did and that which was found in him, they are written in the book of the kings of Israel and Judah, and Jehoiachin his son reigned in his place.

9 Jehoiachin was eight years old when he began to reign, and he reigned three months and ten days in Jerusalem. He did that which was evil the sight of the Lord. 10 At the beginning of the year, king Nebuchadnezzar sent for him and brought him to Babylon, with the valuable vessels of the house of the Lord, and made Zedekiah his brother king over Judah and Jerusalem.

11 Zedekiah was 21 years old when he began to reign, and he reigned eleven years in Jerusalem. 12 He did that which was evil in the sight of the Lord his God. He did not humble himself before Jeremiah the prophet speaking from the mouth of the Lord.

13 He also rebelled against king Nebuchadnezzar, who had made him swear by the Lord, but he stiffened his neck and hardened his heart against turning to the Lord, the God of Israel. 14 Moreover all the chiefs of the priests and the people trespassed very greatly after all the abominations of the nations, and they polluted the house of the Lord which he had made holy in Jerusalem.

15 The Lord, the God of their fathers sent warnings to them by his messengers because he had compassion on his people and on his dwelling place, 16 but they mocked the messengers of the Lord and despised his words and scoffed at his prophets, until the wrath of the Lord arose against his people, until there was no remedy.

17 Therefore he brought on them the king of the Chaldeans, who killed their young men with the sword in the house of their sanctuary and had no compassion, on young man or virgin, old man or gray-headed. He gave them all into his hand.

18 All these he brought to Babylon: all the vessels of the house of the Lord, great and small, and the treasures of the house of the Lord, and the treasures of the king, and of his officials. 19 They burned the house of the Lord and broke down the wall of Jerusalem and burned all its palaces with fire and destroyed all of its valuable vessels. 20 He took those who had escaped the sword to Babylon, and they were servants to him and his sons until the reign of the kingdom of Persia, 21 to fulfill the word of the Lord by Jeremiah’s mouth, until the land had enjoyed its Sabbaths. As long as it lay desolate, it kept Sabbath, to fulfill 70 years.

The Proclamation of Cyrus

22 Now in the first year of Cyrus king of Persia, that the word of the Lord by the mouth of Jeremiah might be fulfilled, the Lord stirred up the spirit of Cyrus king of Persia, so that he made a proclamation throughout all his kingdom and put it also in writing, saying, 23 “Cyrus king of Persia says, ‘Lord, the God of heaven, has given all the kingdoms of the earth to me, and he has commanded me to build him a house in Jerusalem, which is in Judah. Whoever there is among you of all his people, the Lord his God be with him, and let him go up.’ ”

1 Paul, called to be an apostle of Jesus Christ through the will of God, and our brother Sosthenes.

2 To the assembly of God which is at Corinth—those who are sanctified in Christ Jesus, called saints, with all who call on the name of our Lord Jesus Christ in every place, both theirs and ours.

3 Grace to you and peace from God our Father and the Lord Jesus Christ.

4 I always thank my God concerning you, for the grace of God which was given you in Christ Jesus, 5 that in everything you were enriched in him, in all speech and all knowledge, 6 just as the testimony of Christ was confirmed in you. 7 Therefore, you do not lack any spiritual gift while waiting for the revelation of our Lord Jesus Christ, 8 who will also confirm you until the end, blameless in the day of our Lord Jesus Christ. 9 God is faithful, through whom you were called into the fellowship of his Son, Jesus Christ, our Lord.

Unity in the Church 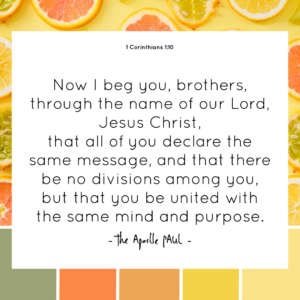 10 Now I beg you, brothers, through the name of our Lord, Jesus Christ, that all of you declare the same message and that there be no divisions among you, but that you be united with the same mind and purpose. 11 For it has been reported to me concerning you, my brothers, by those who are from Chloe’s household that there are contentions among you.

12 Now I mean this, that each one of you says, “I follow Paul,” “I follow Apollos,” “I follow Cephas,” and, “I follow Christ.” 13 Is Christ divided? Was Paul crucified for you? Or were you baptized into the name of Paul? 14 I thank God that I baptized none of you, except Crispus and Gaius, 15 so that no one should say that I had baptized you into my own name. 16 I also baptized the household of Stephanas. Besides them, I do not know whether I baptized any other. 17 For Christ sent me not to baptize, but to preach the Gospel—not in the wisdom of words, so that the cross of Christ would not be made void.

1 The Lord is my light and my salvation.
Whom shall I fear?
The Lord is the strength of my life.
Of whom shall I be afraid?
2 When evil men came at me to destroy my flesh,
both my adversaries and my enemies, they stumbled and fell.
3 Though an army should encamp against me,
my heart shall not fear.
Though war should rise against me,
even then I will be confident.

4 One thing I have asked of the Lord, that I will seek after:
that I may dwell in the house of the Lord all the days of my life,
to see the beauty of the Lord,
and to inquire in his temple.
5 For in the day of trouble, he will keep me secretly in his pavilion.
In the secret place of his tabernacle, he will hide me.
He will lift me up on a rock.
6 Now my head will be lifted up above my enemies around me.
I will offer sacrifices of joy in his tent.
I will sing, yes, I will sing praises to the Lord.

20 Whoever curses his father or his mother,
his lamp shall be put out in blackness of darkness.
21 An inheritance quickly gained at the beginning,
will not be blessed in the end.