For no one can lay any other foundation than that which has been laid, which is Jesus Christ. 1 Corinthians 3:11

3 At the same time Tattenai, the governor beyond the River came to them, with Shetharbozenai, and their companions, and asked them, “Who gave you a decree to build this house, and to finish this wall?” 4 They also asked for the names of the men were who were making this building. 5 But the eye of their God was on the elders of the Jews, and they did not make them cease, until the matter should come to Darius, and an answer should be returned by letter concerning it.

6 The copy of the letter that Tattenai, the governor beyond the River, and Shetharbozenai, and his companions the Apharsachites, who were beyond the River, sent to Darius the king follows. 7 They sent a letter to him, in which was written:

To Darius the king, all peace.

8 Be it known to the king that we went into the province of Judah, to the house of the great God, which is built with great stones, and timber is laid in the walls. This work is going on with diligence and is prospering in their hands.

9 Then we asked those elders, and said to them thus, “Who gave you a decree to build this house, and to finish this wall?”

10 We asked them their names also, to inform you that we might write the names of the men who were at their head.

11 Thus they returned us answer, saying,

“We are the servants of the God of heaven and earth, and are building the house that was built these many years ago, which a great king of Israel built and finished. 12 But after our ancestors had provoked the God of heaven to wrath, he gave them into the hand of Nebuchadnezzar king of Babylon, the Chaldean, who destroyed this house, and took the people captive into Babylon.

16 Then the same Sheshbazzar came and laid the foundations of the house of the Lord which is in Jerusalem. Since that time until now it has been being built, and yet it is not completed.

17 Now therefore, if it seems good to the king, let a search be made in the king’s treasure house, which is there at Babylon, whether it is so, that a decree was made of Cyrus the king to build this house of God at Jerusalem, and let the king send his desire to us concerning this matter.”

The Decree of Darius

1 Then Darius the king made a decree, and the house of the archives, where the treasures were laid up in Babylon, was searched. 2 A scroll was found at Achmetha, in the palace that is in the province of Media, and in it this was written for a record:

Concerning the house of the Lord at Jerusalem, let the house be built, the place where they offer sacrifices, and let its foundations be strongly laid, with its height 90 feet and its width 90 feet, 4 with three courses of great stones and a course of new timber. Let the expenses be given out of the king’s house.

9 That which they have need of, including young bulls, rams, and lambs, for burnt offerings to the God of heaven, also wheat, salt, wine, and oil, according to the word of the priests who are at Jerusalem, let it be given them day by day without fail, 10 that they may offer sacrifices of pleasant aroma to the God of heaven, and pray for the life of the king, and of his sons.

11 I have also made a decree that whoever alters this message, let a beam be pulled out from his house, and let him be lifted up and fastened on it, and let his house be made a dunghill for this. 12 May the God who has caused his name to dwell there overthrow all kings and peoples who stretch out their hand to alter this, to destroy this house of God which is at Jerusalem. I Darius have made a decree. Let it be done with all diligence.

13 Then Tattenai, the governor beyond the River, Shetharbozenai, and their companions did accordingly with all diligence, because Darius the king had sent a decree.

14 The elders of the Jews built and prospered, through the prophesying of Haggai the prophet and Zechariah the son of Iddo. They built and finished it, according to the commandment of the God of Israel, and according to the decree of Cyrus, Darius, and Artaxerxes king of Persia. 15 This house was finished on the third day of the month Adar, which was in the sixth year of the reign of Darius the king.

The Feast of Dedication

16 The Israelites, the priests, the Levites, and the rest of the exiles kept the dedication of this house of God with joy.

17 They offered at the dedication of this house of God 100 bulls, 200 rams, 400 lambs, and for a sin offering for all Israel, twelve male goats, according to the number of the tribes of Israel.

18 They appointed priests in their divisions, and the Levites in their courses, for the service of the Lord, which is at Jerusalem, as it is written in the book of Moses.

19 The people who had returned from exile kept the Passover on the fourteenth day of the first month. 20 Because the priests and the Levites had purified themselves together, all of them were pure. They killed the Passover for all the exiles, for their brothers the priests, and for themselves.

21 The Israelites who had returned from captivity, and all who had separated themselves to them from the filthiness of the nations of the land, to seek the Lord, the God of Israel, ate, 22 and kept the feast of unleavened bread seven days with joy, because the Lord had made them joyful and had turned the heart of the king of Assyria to them, to strengthen their hands in the work of the house of God, the God of Israel.

1 Brothers, I could not speak to you as to spiritual people, but as to people of the flesh, as to babies in Christ. 2 I fed you with milk, not with meat, for you were not yet ready. Indeed, you are not ready even now, 3 for you are still worldly. For insofar as there is jealousy, strife, and factions among you, are you not worldly, and do you not walk in the ways of men? 4 For when one says, “I follow Paul,” and another, “I follow Apollos,” are you not worldly?

5 Who then is Apollos, and who is Paul, but servants through whom you believed, and each as the Lord gave to him? 6 I planted. Apollos watered. But God gave the increase. 7 So then neither he who plants is anything, nor he who waters, but God who gives the increase. 8 Now he who plants and he who waters are the same, but each will receive his own reward according to his own labor. 9 For we are God’s fellow workers. You are God’s field, God’s building. 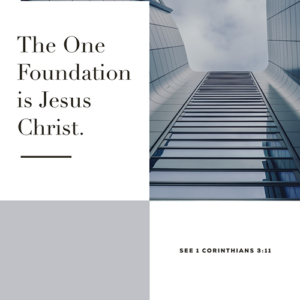 Christ the Only Foundation

10 According to the grace of God which was given to me, as a wise master builder, I laid a foundation, and another builds on it. But let each man be careful how he builds on it. 11 For no one can lay any other foundation than that which has been laid, which is Jesus Christ.

You are God’s Temple

16 Do you not know that you are a temple of God, and that the Spirit of God lives in you? 17 If anyone destroys God’s temple, God will destroy him, for God’s temple is holy, which you are.

18 Let no one deceive himself. If anyone thinks that he is wise among you in this world, let him become a fool, that he may become wise.

Worldly Wisdom is Foolishness to God

19 For the wisdom of this world is foolishness with God. For it is written,

“He has taken the wise in their craftiness.”

“The Lord knows the reasoning of the wise, that it is worthless.”

21 Therefore let no one boast in men. For all things are yours, 22 whether Paul, or Apollos, or Cephas, or the world, or life, or death, or things present, or things to come. All are yours, 23 and you are Christ’s, and Christ is God’s.

26 A wise king winnows out the wicked,
and drives the threshing wheel over them.
27 The spirit of man is the lamp of the Lord,
searching all his innermost parts.