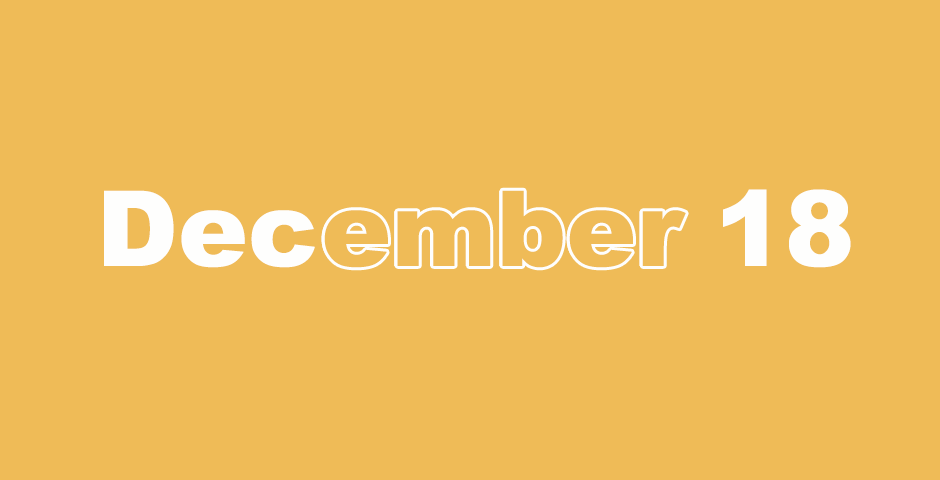 For the vision is yet for the appointed time, and it hurries toward the end, and will not prove false. Though it takes time, wait for it, because it will surely come. It will not delay. Habakkuk 2:3

1 The revelation which Habakkuk the prophet saw.

2 Lord, how long will I cry,
and you will not listen?
I cry out to you “Violence!”
and will you not save?
3 Why do you force me to look at iniquity,
and tolerate perversity?
Destruction and violence are before me.
There is conflict, and contention is rising up.
4 Therefore the law is paralyzed,
and justice never prevails,
for the wicked surround the righteous.
Therefore justice comes out perverted.

5 “Look among the nations.
Watch and wonder and marvel,
for I am doing a work in your days,
which you will not believe
though it is told to you.

6 For I am raising up the Chaldeans,
that bitter and impetuous nation,
that marches throughout the face of the earth,
to possess dwelling places that are not theirs.
7 They are feared and dreaded.
Their justice and their authority
are founded in themselves.
8 Their horses also are swifter than leopards
and are more fierce than the evening wolves.
Their horsemen press proudly on.
Yes, their horsemen come from afar.
They fly like an eagle that swoops down to devour.

9 All of them come for violence.
Their armies advance like the east wind,
gathering prisoners like sand.
10 Yes, they scoff at kings
and mock princes.
They laugh at every stronghold,
for they build earthen ramps
to capture it.
11 Then they sweep by like the wind
and move on.
They are indeed guilty
whose power is their god.”

12 Are you not from everlasting,
my Lord, my God, my Holy One?
You will not die.
Lord, you have appointed the Chaldeans to execute judgment.
You, my Rock, have established them to punish us.
13 You whose eyes are too pure to see evil,
and who cannot look on perversity,
why do you tolerate those who deal treacherously,
and remain silent when the wicked devour someone
who is more righteous than he,
14 and make men like the fish of the sea,
like the creeping things,
that have no ruler over them?
15 He takes up all of them with the hook.
He catches them in his net,
and gathers them in his dragnet.
Therefore he rejoices and is glad.
16 Therefore he makes sacrifices to his net,
and burns incense to his dragnet,
because by them his life is luxurious
and his food is good.
17 Will he therefore continually empty his net,
and kill the nations without mercy?

1 I will stand at my watch,
and set myself on the ramparts,
and will look out to see what he will say to me
and what I will answer concerning my complaint. 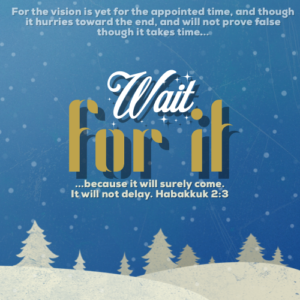 2 The Lord answered me,

“Write the vision,
and make it plain on tablets,
so that the herald may easily read it.
3 For the vision is yet for the appointed time,
and it hurries toward the end and will not prove false.
Though it takes time, wait for it,
because it will surely come. It will not delay.
4 Look at the one who is puffed up with pride.
From within, he is not upright,
but the righteous one will live because of his faith.
5 Wine further deceives the proud.
An arrogant man will not stay home,
but increases his desire like Sheol,
and like death, he cannot be satisfied,
but gathers to himself all the nations,
and heaps to himself all peoples.

Woe to the Chaldeans

6 Will not all of them mock him in parables,
and taunt him in proverbs, saying,

‘Woe to him who increases that which is not his
and who enriches himself through extortion!’
For how long?’
7 Will your creditors not rise up suddenly,
and wake up those who make you tremble,
and you will be their victim?
8 Because you have plundered many nations,
the remnant of the peoples will plunder you,
because of bloodshed,
and the violence done to the land,
to the city and to all who dwell in it.

9 Woe to him who builds his house with dishonest gain,
that he may set his nest on high,
to protect himself from disaster!
10 You have brought shame to your house,
by destroying many peoples,
and have sinned against yourself.
11 For the stones will cry out from the walls,
and the beams from the woodwork will answer it.

12 Woe to him who builds a town with blood,
and establishes a city by iniquity!
13 Is it not from the Lord of Hosts
that the people labor merely to feed the fire,
and the nations weary themselves for nothing?
14 For the earth will be filled with the knowledge
of the glory of the Lord,
as water covers the sea.

15 Woe to him who gives his neighbor drink,
pouring your inflaming wine until they are drunk,
so that you may gaze at their naked bodies!
16 You are filled with shame, and not glory.
You will also drink, and be exposed!
The cup of the right hand of the Lord
will come around to you,
and disgrace will cover your glory.
17 For the violence done to Lebanon will overwhelm you,
because of the destruction of the animals,
which terrified them,
because of the bloodshed,
and the violence done to the land,
to every city and to those who dwell in them.

18 What value does the engraved image have,
after its maker has carved it,
the molten image, a teacher of lies,
that he who formed it trusts in it–
mute idols?
19 Woe to him who says to the wood, ‘Awake!’
or to the mute stone, ‘Arise!’
Is it able to teach?
Look, it is overlaid with gold and silver,
and there is no breath at all within it.
20 But the Lord is in his holy temple.
Let all the earth be silent before him!”

1 A prayer of Habakkuk, the prophet:

2 Lord, I have heard of your fame.
I stand in awe of your deeds, Lord.
Renew your works in these years.
In these years make it known.
But in wrath, remember mercy.
3 The Lord came from Teman,
the Holy One from Mount Paran.

His glory covered the heavens,
and his praise filled the earth.
4 His splendor is like the sunrise.
Rays shine from his hand
where his power is hidden.
5 Plague went before him,
and pestilence followed his feet.
6 He stood, and the earth shook.
He looked, and the nations trembled.
The ancient mountains crumbled.
The age-old hills collapsed.
And his ways are eternal.
7 I saw the tents of Cushan in affliction.
The dwellings of the land of Midian trembled.
8 Was the Lord displeased with the rivers?
Was your anger against the rivers,
or your wrath against the sea,
that you rode on your horses,
on your chariots of salvation?
9 You uncovered your bow.
You called for many arrows.

You split the earth with rivers.
10 The mountains saw you, and were afraid.
The raging waters passed by.
The deep roared and lifted up its hands on high.
11 The sun and moon stood still in the sky.
At the light of your arrows as they went,
at the sparkle of your glittering spear.
12 You marched through the land in wrath.
You threshed the nations in anger.
13 You went out for the salvation of your people,
for the salvation of your anointed.
You crushed the head of the land of wickedness.
You stripped them head to foot.

14 You pierced the heads of his warriors with their own spears.
They came like a whirlwind to scatter us,
gloating as if to devour the poor in secret.
15 You trampled the sea with your horses,
churning mighty waters.
16 When I heard the sound, I trembled,
and my lips quivered.
Rot enters into my bones, and I tremble in my place,
because I must wait quietly for the day of trouble,
for the coming of the people who invade us.

17 Though the fig tree does not bud,
and no fruit is on the vine;
though the olive crop fails,
and the fields yield no food;
though the flock is cut off from the fold,
and there are no cattle in the stalls;
18 yet I will rejoice in the Lord.
I will be joyful in the God of my salvation!
19 God, the Lord, is my strength.
He makes my feet like the deer’s,
and enables me to stand in high places.

For the music director, on my stringed instruments.

3 Then out of the smoke came locusts on the earth, and power was given to them, as the scorpions of the earth have power. 4 They were told that they should not hurt the grass of the earth, nor any green thing, nor any tree, but only those people who do not have the seal of God on their foreheads. 5 They were given power, not to kill them, but to torment them for five months. Their torment was like the torment of a scorpion when it strikes a person. 6 In those days people will seek death, and will not find it. They will want to die, and death will escape them.

7 The shapes of the locusts were like horses prepared for war. On their heads were something like golden crowns, and their faces were like people’s faces. 8 They had hair like women’s hair, and their teeth were like those of lions. 9 They had breastplates, like breastplates of iron. The sound of their wings was like the sound of chariots or of many horses rushing to war. 10 They have tails like those of scorpions, with stingers. In their tails they have the power to harm people for five months. 11 They have over them as king, the angel of the abyss. His name in Hebrew is “Abaddon”, but in Greek, he has the name “Apollyon”.

12 The first woe is past. There are still two woes coming after this.

13 The sixth angel sounded his trumpet. I heard a voice from the horns of the golden altar which is before God, 14 saying to the sixth angel who had the trumpet, “Free the four angels who are bound at the great river Euphrates!”

15 The four angels were freed who had been prepared for that hour and day and month and year, so that they might kill one third of mankind. 16 The number of the armies of the horsemen was 200 million. I heard the number of them.

20 The rest of mankind, who were not killed with these plagues, did not repent of the works of their hands, that they would not worship demons, and the idols of gold, and of silver, and of brass, and of stone, and of wood; which cannot see, hear, or walk. 21 They did not repent of their murders, their sorcery, their sexual immorality, or their thievery.

By the Rivers of Babylon

1 By the rivers of Babylon, there we sat down.
Yes, we wept, when we remembered Zion.
2 On the willows in that land,
we hung up our harps.
3 For there, those who led us captive asked us for songs.
Those who tormented us demanded songs of joy:
“Sing us one of the songs of Zion!”
4 How can we sing the Lord’s song in a foreign land?
5 If I forget you, Jerusalem,
let my right hand forget its skill.
6 Let my tongue stick to the roof of my mouth
if I do not remember you,
if I do not prefer Jerusalem above my greatest joy.

7 Remember, Lord, against the children of Edom
in the day of Jerusalem,
who said, “Raze it!
Raze it to its foundation!”
8 Daughter of Babylon, doomed to destruction,
he will be happy who repays you,
as you have done to us.
9 Happy shall he be,
who takes and dashes your little ones against the rock.

10 Do not slander a servant to his master,
lest he curse you, and you be held guilty.