2 Now I will show you the truth. Three more kings will rise up in Persia, and the fourth will be far richer than all of them. When he has grown strong through his riches, he will incite everyone against the kingdom of Greece.

3 A mighty king will arise, who will rule with great authority and do whatever he pleases. 4 When he has risen to power, his kingdom will be broken up and divided to all four winds of the sky, but will not given to his descendants nor ruled with the authority with which he had ruled, for his kingdom will be uprooted and given to others besides these.”

14 During that time, many will rise up against the king of the south. Also, the violent among your people will establish a rebellion to fulfill the vision, but they will fail.

15 So the king of the north will build a military blockade, advance, and take the well-fortified city. The forces of the south will not stand, not even the special forces. They will not have the strength. 16 But the one who comes against him will do whatever he pleases, and no one will stop him. He will establish himself in the glorious land with the power to bring destruction. 17 He will be determined to come with the strength of his entire kingdom, aligning and implementing equitable conditions with him. He will give him a daughter in marriage, to corrupt from within, but she will stand neither with him nor for him.

20 Then he will establish a tax collector to represent him and go throughout the kingdom in order to maintain its glory. Within a few days he will be destroyed but not in anger or in battle.

21 In his place a contemptible person will rise up, to whom the honor of the kingdom had not been bestowed. But he will come in a time of security and will obtain the kingdom through deceit. 22 And overwhelming forces will be swept away and shattered before him, and will be broken. Yes, also the prince of the covenant.

23 After the treaty is made with him, he will work deceitfully, for he will rise up and will become strong, with only a few people. 24 In a time of peace he will come into the richest parts of the province, and he will do that which his fathers have not done, nor his fathers’ fathers. He will distribute plunder, spoil, and riches to his followers. Yes, he will devise his plans against fortified cities, but for a limited time.

25 He will stir up his power and courage against the king of the south, with a great army, and the king of the south will wage war in battle with an exceedingly great and mighty army, but he will not withstand them, for they will devise plans against him. 26 Yes, the ones who eat from his royal table will destroy him, and his army will be swept away. Many will fall down slain.

27 As for both these kings, their hearts will be fixed on evil and they will speak lies at the table, but it will not succeed, for the end will still be at the appointed time. 28 Then he will return to own his land with great wealth. His heart will be against the holy covenant. He will take action before returning to his own land.

29 He will return at the appointed time and come into the south, but it will not be in the latter time as it was in the former. 30 For ships of Kittim will come against him. Therefore he will be disheartened and will return. He will rage against the holy covenant and will take action. He will return and show regard to those who forsake the holy covenant.31 His forces will rise on his behalf, and they will desecrate the sanctuary fortress. They will remove the continual burnt offering and set up the abomination that brings desolation.

32 Those who act wickedly toward the covenant, he will corrupt through flattery, but the people who know their God will be strong and take action. 33 Those who are wise among the people will instruct many, yet they will fall by the sword and by flame, by captivity and by plunder, for many days.

34 Now when they fall, some help will be given to them, but many will deceitfully align with them. 35 Some of those who are wise will fall, to refine and purify them, and to make them white, to the time of the end, because it is yet for the appointed time.”

36 “The king will do as he pleases. He will exalt himself and magnify himself above every god and will speak astonishing things against the God of gods. He will prosper until the indignation is accomplished, for that which has been determined will be done. 37 He will not regard the gods of his fathers, or the desire of women, or regard any god, for he will magnify himself above all of them.

38 But instead, he will honor the god of fortresses, a god whom his fathers did not know, with gold, silver, and with precious stones and costly things. 39 He will deal with the strongest fortresses with the help of a foreign god. He will greatly honor whoever acknowledges him. He will make them to rulers over many and will divide the land for a price.

40 At the time of the end, the king of the south will attack him, and the king of the north will come against him like a whirlwind, with chariots, with horsemen, and with many ships. He will enter into the countries, moving through and overflowing them. 41 He will enter also into the glorious land, and many countries will be overthrown, but these will escape from his power: Edom, Moab, and the prominent people of Ammon.

44 But news from the east and from the north will trouble him, and he will go out with great fury to destroy and utterly to sweep many away. 45 He will pitch the tents of his palace between the sea and the glorious holy mountain, yet he will come to his end, and no one will help him.”

1 “At that time Michael will rise up, the great prince who watches over your people, and there will be a time of trouble, such that has never been since the nations began, until this time. At that time your people will be delivered, everyone who is found written in the book.

4 But you, Daniel, shut up the words and seal the book, to the time of the end. Many will run back and forth, and knowledge will be increased.

5 Then I, Daniel, looked, and there stood two others, one on each side of the river bank. 6 One said to the man clothed in linen, who was above the waters of the river, ‘How long will it be to the end of these wonders?’

8 I heard, but I did not understand. Then I said, ‘My lord, what will be the outcome of these things?’

11 From the time that the continual burnt offering is taken away and the abomination that makes desolate is set up, there will be 1,290 days. 12 Blessed is he who waits, and comes to the 1,335 days.

13 But go your way until the end, for you will rest, and will stand in your inheritance at the end of the days.’ ” 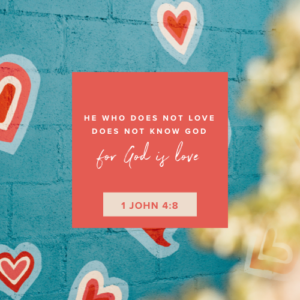 7 Beloved, let us love one another, for love is of God, and everyone who loves has been born of God, and knows God. 8 He who does not love does not know God, for God is love.

9 By this, God’s love was revealed in us, that God has sent his one and only Son into the world that we might live through him. 10 This is what love is: it is not that we loved God, but that he loved us and sent his Son as the atoning sacrifice for our sins.

11 Beloved, if God loved us in this way, we also ought to love one another. 12 No one has seen God at any time. If we love one another, God remains in us, and his love has been perfected in us. 13 By this we know that we remain in him and he in us, because he has given us of his Spirit. 14 We have seen and testify that the Father has sent the Son as the Savior of the world.

15 Whoever confesses that Jesus is the Son of God, God remains in him, and he in God. 16 We know and have believed the love which God has for us. God is love, and he who remains in love remains in God, and God remains in him. 17 In this, love has been made perfect among us, that we may have boldness on the day of judgment, because as he is, so we are in this world.

18 There is no fear in love, but perfect love casts out fear, because fear has to do with punishment. He who fears is not made perfect in love. 19 We love him, because he first loved us.

3 Whoever loves wisdom brings joy to his father,
but a companion of prostitutes squanders his wealth.

4 Through justice a king makes the land stable,
but he who takes bribes tears it down