By the Word of the Lord the heavens were made: all the host of them by the breath of His mouth. Psalm 33:6

1 When the people saw that Moses delayed coming down from the mountain, they gathered together to Aaron, and said to him, “Come, make us gods, which shall go before us; for this Moses, the man who brought us up out of the land of Egypt, we do not know what has become of him.”

2 Aaron said to them, “Take off the golden rings, which are on the ears of your wives, your sons and your daughters, and bring them to me.”

3 All the people took off the golden rings which were on their ears, and brought them to Aaron. 4 He received what they handed him, fashioned it with an engraving tool, and made it into a molten calf. Then they said, “These are your gods, Israel, which brought you up out of the land of Egypt.”

5 When Aaron saw this, he built an altar before it; and Aaron made a proclamation, and said, “Tomorrow shall be a feast to the Lord.”

6 They rose early the next day, and offered burnt offerings, and brought peace offerings; and the people sat down to eat and to drink, and rose up to play.

7 The Lord spoke to Moses, “Go, get down; for your people, who you brought up out of the land of Egypt, have corrupted themselves! 8 They have turned away quickly from the way which I commanded them. They have made for themselves a molten calf, and have worshiped it, and have sacrificed to it, and said, ‘These are your gods, Israel, which brought you up out of the land of Egypt.’ ”

Moses Intercedes for the Israelites

9 The Lord said to Moses, “I have seen these people, and they are a stiff-necked people. 10 Now therefore leave me alone, that my wrath may burn hot against them, and that I may destroy them; and I will make of you a great nation.”

11 Moses begged the Lord his God, and said, “Lord, why does your wrath burn hot against your people, that you have brought out of the land of Egypt with great power and with a mighty hand?

12 Why should the Egyptians talk, saying, ‘He brought them out with malicous intent, to kill them in the mountains, and to destroy them from the face of the earth?’ Turn from your fierce wrath, and turn away from this destruction of your people.

13 Remember Abraham, Isaac, and Israel, your servants, to whom you swore by your own self, and said to them, ‘I will multiply your offspring like the stars of the sky, and all this land that I have spoken of I will give to your offspring, and they shall inherit it forever.’ ”

14 So the Lord turned away from the destruction which he said he would do to his people.

Moses Descends with the Tablets

15 Moses turned, and went down from the mountain, with the two tablets of the covenant in his hand; tablets that were written on both sides. They were written on one side and on the other. 16 The tablets were the work of God, and the writing was the writing of God, engraved on the tablets.

17 When Joshua heard the noise from the people as they shouted, he said to Moses, “There is the sound of war in the camp.”

19 As soon as he came near to the camp, he saw the calf and the dancing. Then Moses’ anger grew hot, and he threw the tablets out of his hands, and broke them at the foot of the mountain. 20 He took the calf which they had made, and burned it with fire, ground it to powder, and scattered it on the water, and made the Israelites drink it.

21 Moses said to Aaron, “What did these people do to you, that you have brought a great sin on them?”

22 Aaron said, “Don’t let the anger of my lord grow hot. You know the people, that they are prone to evil. 23 For they said to me, ‘Make us gods, which shall go before us. As for this Moses, the man who brought us up out of the land of Egypt, we don’t know what has become of him.’

24 I said to them, ‘Whoever has any gold, let them take it off.’ So they gave it to me; and I threw it into the fire, and out came this calf.”

25 When Moses saw that the people were out of control, (for Aaron had let them get out of control, to their shame before their adversaries), 26 then Moses stood in the gate of the camp, and said, “Whoever is on the Lord’s side, come to me!” All the Levites gathered together to him.

27 He said to them, “The Lord, God of Israel, says, ‘Each of you, put your sword on your thigh, and go back and forth from gate to gate throughout the camp, and each of you, kill your brother, your companion, and your neighbor.’ ”

28 The Levites did according to the word of Moses, and among the people, about 3,000 men fell that day.

29 Moses said, “Today you have consecrated yourselves to the Lord, for each of you turned on his son, and on his brother so that the Lord may bestow a blessing upon you today.”

30 The next day, Moses said to the people, “You have committed a great sin. Now I will go up to the Lord. Perhaps I shall make atonement for your sin.”

31 Moses returned to the Lord and said, “Oh, this nation has committed a great sin. They have made themselves gods of gold. 32 Yet now, if you will, forgive their sin—and if not, please blot me out of your book which you have written.”

33 The Lord said to Moses, “Whoever has sinned against me, I will blot him out of my book. 34 Now go, lead the people to the place of which I have spoken to you. My angel shall go before you. Nevertheless, on the day when I punish, I will punish them for their sin.”

35 The Lord struck the people, because of what they did with the calf, which Aaron made.

The Command to Leave Sinai

1 The Lord spoke to Moses, “Depart, go up from here, you and the people that you have brought up out of the land of Egypt, to the land of which I swore to Abraham, to Isaac, and to Jacob, saying, ‘I will give it to your offspring.’

2 I will send an angel before you; and I will drive out the Canaanite, the Amorite, and the Hittite, and the Perizzite, the Hivite, and the Jebusite.

3 Go to a land flowing with milk and honey; but I will not go up among you, for you are a stiff-necked people, lest I destroy you on the way.”

4 When the people heard this bad news, they mourned; and no one put on his jewelry.

5 The Lord had said to Moses, “Tell the Israelites, ‘You are a stiff-necked people. If I were to go up among you for one moment, I would destroy you. Therefore now take off your jewelry, that I may know what to do to you.’ ”

6 The Israelites stripped themselves of their jewelry from Mount Horeb onward.

The Tent of Meeting

8 When Moses went out to the Tent, all the people rose up and stood, everyone at their tent door, and watched Moses, until he had gone into the Tent.

11 The Lord spoke to Moses face to face, as a man speaks to his friend. He returned back to the camp, but his servant Joshua, the son of Nun, a young man, did not depart from the Tent.

12 Moses said to the Lord, “Look, you have told me, ‘Bring this people up;’ and you have not let me know whom you will send with me. Yet you have said, ‘I know you by name, and you have also found favor in my sight.’

15 Moses said to him, “If your presence does not go with me, do not lead us up from here. 16 For how would the people know that your people and I have found favor in your sight? Is it not by you going with us that we are distinguished as a separate people from all the people on the face of the earth?”

17 The Lord said to Moses, “I will do this thing also that you have spoken; for you have found favor in my sight, and I know you by name.”

21 The Lord also said, “There is a place near me, and you shall stand upon a rock. 22 It will happen, while my glory passes by, that I will put you in a cleft of the rock, and will cover you with my hand until I have passed by; 23 then I will take away my hand, and you will see my back; but my face shall not be seen.”

1 Now when morning had come, all the chief priests and the elders of the people schemed together against Jesus to put him to death: 2 and they bound him, and led him away, and delivered him up to Pontius Pilate, the governor.

3 Then Judas, who betrayed him, when he saw that Jesus was condemned, felt remorse, and brought back the 30 pieces of silver to the chief priests and elders, 4 saying, “I have sinned in that I betrayed innocent blood.”

But they said, “What is that to us? See to it yourself.”

5 He threw down the pieces of silver in the sanctuary, and departed. He went away and hanged himself.

6 The chief priests took the pieces of silver, and said, “It’s not lawful to put them into the treasury, since it is blood money.” 7 They consulted together, and bought the potter’s field with it, a burial site for foreigners. 8 Therefore that field was called “The Field of Blood” to this day. 9 Then that which was spoken through the prophet Jeremiah was fulfilled, saying,

“They took the 30 pieces of silver,
the value of him whose price
had been set by the Israelites,
10 and they gave it for the potter’s field,
as the Lord commanded me.”

11 Now Jesus stood before the governor: and the governor asked him, saying, “Are you the King of the Jews?”

12 When he was accused by the chief priests and elders, he answered nothing. 13 Then Pilate said to him, “Don’t you hear all the things they are testifying against you?”

14 He gave him no answer, not even one word, so that the governor marveled greatly.

1 Rejoice in the Lord, you righteous!
Praise is fitting for the upright.
2 Praise the Lord with the harp.
Sing to him with the ten stringed lyre.
3 Sing to him a new song.
Play skillfully with a shout of joy!

4 For the Word of the Lord is right.
All his work is done in truth.
5 He loves righteousness and justice.
The covenant loyalty of the Lord fills the earth. 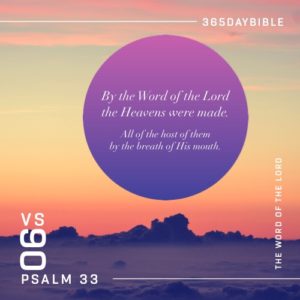 6 By the Word of the Lord the heavens were made:
all the host of them by the breath of his mouth.
7 He gathers the waters of the sea together like a heap.
He lays up the depths in storehouses.
8 Let all the earth fear the Lord.
Let all the inhabitants of the world stand in awe of him.
9 For he spoke, and it was done.
He commanded, and it stood fast.

10 The Lord brings the counsel of the heathen to nothing.
He makes ineffective, the schemes of the people.
11 The counsel of the Lord stands fast forever,
the thoughts of his heart to all generations.

33 Hear instruction, and be wise.
Do not refuse it.
34 Blessed is the man who hears me,
watching daily at my gates,
waiting at the posts of my doors.
35 For whoever finds me, finds life,
and will obtain favor from the Lord.
36 But he who sins against me wrongs his own soul.
All those who hate me love death.”