Blessed is he who considers the poor. The Lord will deliver him in the time of trouble. Psalm 41:1

The Place of Sacrifice

1 The Lord spoke to Moses, saying, 2 “Speak to Aaron, and to his sons, and to all the Israelites, and say to them, ‘This is what the Lord has commanded: 3 Any Israelite who kills a bull or lamb or goat, in the camp or outside the camp, 4 and has not brought it to the door of the Tent of Meeting to offer it as an offering to the Lord before the Lord’s tabernacle; blood shall be imputed to that man. He has shed blood. That man shall be cut off from among his people.

8 You shall say to them, ‘Any Israelite or foreigner who sojourns among them, who offers a burnt offering or sacrifice, 9 and does not bring it to the door of the Tent of Meeting to sacrifice it to the Lord, that man shall be cut off from his people.

10 Any Israelite or foreigner who sojourns among you, who ingests blood of any kind, I will set my face against that person and will cut off that person from among his people. 11 For the life of a creature is in the blood. I have given it to you on the altar to make atonement for yourselves, for it is the blood that makes atonement for the soul. 12 Therefore I have said to the Israelites, “No person among you may ingest blood, nor may any stranger who lives as a foreigner among you injest blood.”

13 Any Israelite or foreigner who sojourns among you, if by hunting or fowling, he takes a wild beast or bird, which is lawful to eat, let him drain out its blood and cover it with earth. 14 For the life of all creatures is in its blood. Therefore I said to the Israelites, “You shall not eat the blood of any kind of creature, for the life of all flesh is its blood. Whoever eats it shall be cut off.”

15 Every person that eats what is found dead or that is torn by animals, whether he is native-born or a foreigner, shall wash his clothes and bathe himself in water and be unclean until the evening. Then he shall be clean. 16 But if he does not wash them, or bathe his flesh, then he shall bear his iniquity.’ ”

6 None of you shall approach any close relatives, to have sexual relations; I am the Lord.

8 You shall not have sexual relations with your father’s wife. It would shame your father.

10 You shall not have sexual relations with your son’s daughter, or your daughter’s daughter, for they are your own descendants.

11 You shall not have sexual relations with your father’s wife’s daughter, conceived by your father, since she is your sister.

18 You shall not take a wife in addition to her sister, to be a rival, to have sexual relations, while her sister is still alive.

19 You shall not approach a woman for sexual relations, as long as she is set apart for her menstrual impurity.

20 You shall not have sexual relations with with your neighbor’s wife and defile yourself with her.

22 You shall not lie with a man as with a woman. That is detestable.

23 You shall not lie with any animal to defile yourself with it. No woman may give herself to an animal, to lie down with it: it is a perversion.

24 Do not defile yourselves in any of these things, for this is the manner in which all these the nations which I am casting out before you were defiled. 25 The land was defiled. Therefore I punished its iniquity, and the land vomited out her inhabitants.

26 You therefore shall keep my statutes and my ordinances and shall not do any of these abominations, neither the native-born, nor the foreigner who sojourns among you 27 (for the men of the land that were before you had done all these abominations, and the land became defiled), 28 that the land not vomit you out also when you defile it, as it vomited out the nation that was before you.

29 For whoever shall do any of these abominations, the people that do them shall be cut off from among their people.

30 Therefore you shall keep my requirements, that you do not practice any of these abominable customs which were practiced before you, and that you do not defile yourselves with them. I am the Lord your God.’ ”

The Faith of the Syro-Phoenician Woman

24 From there he arose and went away into the borders of Tyre and Sidon. He entered into a house and did not want anyone to know it, but he could not escape notice. 25 For a woman, whose little daughter had an unclean spirit, having heard of him, came and fell down at his feet. 26 Now the woman was a Greek, a Syro-Phoenician by race. She begged Jesus that he would cast the demon out of her daughter. 27 But Jesus said to her, “Let the children be filled first, for it is not appropriate to take the children’s bread and throw it to the dogs.”

28 But she answered him, “Yes, Lord. Yet even the dogs under the table eat the children’s crumbs.”

29 He said to her, “Because you have said this, you can go. The demon has gone out of your daughter.”

30 She went back to her house and found the child having been laid on the bed, and the demon had gone out from her.

31 Again he departed from the borders of Tyre and Sidon and came to the sea of Galilee, through the middle of the region of Decapolis. 32 They brought to him one who was deaf and had an impediment in his speech. They begged him to lay his hand on him. 33 He took him aside from the multitude, privately, and put his fingers into his ears, and he spat and touched his tongue. 34 Looking up to heaven, he sighed, and said to him, “Ephphatha!” that is, “Be opened!” 35 Immediately his ears were opened, and the impediment of his tongue was released, and he spoke clearly.

36 Jesus commanded them that they should tell no one, but the more he commanded them, the more widely they proclaimed it. 37 They were astonished beyond measure, saying, “He has done everything well. He makes even the deaf hear, and the mute speak!”

1 In those days, when there was a very great multitude, and having nothing to eat, Jesus called his disciples to himself and said to them, 2 “I feel sorry for these people because they have stayed with me now for three days and have had nothing to eat. 3 If I send them away to their home hungry, they will faint on the way, for some of them have come a long way.”

4 His disciples answered him, “From where could one get bread to satisfy these people, here in this deserted place?”

5 He asked them, “How many loaves do you have?”

6 He commanded the crowds to sit down on the ground, and he took the seven loaves. Having given thanks, he broke them and gave them to his disciples to serve, and they served the people. 7 They had a few small fish, and after he had blessed them, he told them to serve these also. 8 They ate, and were filled. They took up seven baskets of broken pieces that were left over. 9 Those who had eaten were about 4,000. Then he sent them away.

10 Immediately he entered into the boat with his disciples, and came into the region of Dalmanutha.

Blessed in He who Considers the Poor 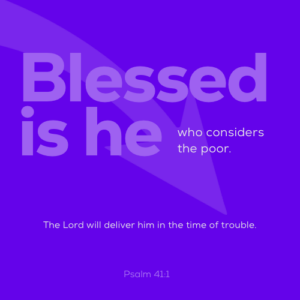 1 Blessed is he who considers the poor.
The Lord will deliver him in the time of trouble.
2 The Lord will preserve him, and keep him alive.
He shall be blessed on the earth,
and he will not surrender him to the will of his enemies.
3 The Lord will sustain him on his sickbed,
and restore him from his bed of illness.

4 I said, “Lord, have mercy on me!
Heal my soul, for I have sinned against you.”
5 My enemies speak with malice against me:
“When will he die and his name vanish?”
6 If he comes to see me, he speaks deceit.
His heart’s intent is to gather slander.
to go out and tell it.

7 All who hate me whisper together against me.
They imagine the worst for me.
8 “A fatal disease”, they say, “has afflicted him.
Now that he is bedridden, he will never get up again.”
9 Yes, my own close friend, in whom I trusted,
who ate bread with me,
has turned against me.

10 But you, O Lord, have mercy on me, and raise me up,
that I may repay them.
11 By this I know that you delight in me,
because my enemy does not triumph over me.
12 As for me, you uphold me in my integrity,
and set me in your presence forever.

13 Blessed be the Lord God of Israel,
from everlasting and to everlasting!
Amen and amen.

15 The rich man’s wealth is his strong city.
The destruction of the poor is their poverty.
16 The labor of the righteous leads to life.
The increase of the wicked leads to sin.