Do not be wise in your own eyes. Fear God, and depart from evil. Proverbs 3:7

1 Abraham took another wife, and her name was Keturah. 2 She bore him Zimran, Jokshan, Medan, Midian, Ishbak, and Shuah.

3 Jokshan became the father of Sheba, and Dedan. The sons of Dedan were Asshurim, Letushim, and Leummim.

4 The sons of Midian were Ephah, Epher, Hanoch, Abida, and Eldaah.

All these were descendants of Keturah.

5 Abraham gave all that he had to Isaac, 6 but Abraham, while he was still living, gave gifts to the sons of Abraham’s concubines, and he sent them away from Isaac his son, eastward, to an eastern country.

7 These are the days of the years of Abraham’s life which he lived: 175 years. 8 Abraham gave up his spirit, and died at a good old age, an old man and full of years, and was gathered to his people. 9 Isaac and Ishmael, his sons, buried him in the cave of Machpelah, in the field of Ephron, the son of Zohar the Hittite, which is near Mamre, 10 the field which Abraham purchased from the Hittites. Abraham was buried there with Sarah, his wife.

11 After the death of Abraham, God blessed Isaac, his son. Isaac lived by Beer Lahai Roi.

Ishmael and his Descendants

12 Now this is the history of the generations of Ishmael, Abraham’s son, whom Hagar the Egyptian, Sarah’s servant, bore to Abraham. 13 These are the names of the sons of Ishmael, by name, according to the order of their birth: the firstborn of Ishmael, Nebaioth, then Kedar, Adbeel, Mibsam, 14 Mishma, Dumah, Massa, 15 Hadad, Tema, Jetur, Naphish, and Kedemah.

16 These are the sons of Ishmael, and these are their names, by their villages, and by their encampments: twelve leaders, according to their clans. 17 These are the years of the life of Ishmael: 137 years. He gave up his spirit and died and was gathered to his people. 18 They lived from Havilah to Shur that is before Egypt, as you go toward Assyria. He lived in opposition to all his relatives.

19 This is the history of the generations of Isaac, Abraham’s son. Abraham became the father of Isaac. 20 Isaac was 40 years old when he took Rebekah, the daughter of Bethuel the Syrian of Paddan Aram, the sister of Laban the Syrian, to be his wife.

21 Isaac entreated the Lord for his wife, because she was barren. The Lord answered him, and Rebekah his wife conceived. 22 The children struggled together within her. She said, “If it is like this, why do I live?” She went to inquire of the Lord. 23 The Lord said to her,

“Two nations are in your womb.
Two peoples, from your body, will be separated.
The one people will be stronger than the other people.
The elder will serve the younger.”

24 When the days until her delivery were fulfilled, there were twins in her womb. 25 The first came out red all over, like a hairy garment. They named him Esau. 26 After that, his brother came out, and his hand had hold of Esau’s heel. He was named Jacob. Isaac was 60 years old when she bore them.

27 The boys grew. Esau was a skillful hunter, a man of the field. Jacob was a quiet man, living in tents. 28 Now Isaac loved Esau, because he ate of his game. Rebekah loved Jacob.

29 Jacob boiled stew. Esau came in from the field, and he was famished. 30 Esau said to Jacob, “Please feed me some of that red stew, for I am famished.” Therefore he was called Edom.

He swore to him. He sold his birthright to Jacob. 34 Jacob gave Esau bread and lentil stew. He ate and drank, rose up, and went his way. So Esau despised his birthright.

18 Now when Jesus saw great multitudes around him, he gave the order to depart to the other side.

19 A scribe came, and said to him, “Teacher, I will follow you wherever you go.”

20 Jesus said to him, “The foxes have holes, and the birds of the sky have nests, but the Son of Man has nowhere to lay his head.”

21 Another of his disciples said to him, “Lord, allow me first to go and bury my father.”

22 But Jesus said to him, “Follow me, and leave the dead to bury their own dead.”

23 When he got into a boat, his disciples followed him. 24 A violent storm came up on the sea, so much that the boat was covered with the waves, but he was asleep. 25 They came to him, and woke him up, saying, “Save us, Lord! We are dying!”

26 He said to them, “Why are you fearful, O you of little faith?” Then he got up, rebuked the wind and the sea, and there was a great calm.

27 The men marveled, saying, “What kind of man is this, that even the wind and the sea obey him?”

28 When he came to the other side, into the country of the Gergesenes, two people possessed by demons met him there, coming out of the tombs, exceedingly fierce, so that nobody could pass that way. 29 They cried out, saying, “What do we have to do with you, Jesus, Son of God? Have you come here to torment us before the time?” 30 Now there was a herd of many pigs feeding far away from them. 31 The demons begged him, saying, “If you cast us out, permit us to go away into the herd of pigs.”

They came out, and went into the herd of pigs: and the whole herd of pigs rushed down the cliff into the sea and died in the water. 33 Those who fed them fled, and went away into the city, and told everything, including what happened to those who were possessed with demons. 34 The whole city came out to meet Jesus. When they saw him, they begged that he would depart from their borders.

The Perils of the Pilgrim

1 Why do you stand far off, Lord?
Why do you hide yourself in times of trouble?
2 In arrogance, the wicked hunt down the weak.
They are caught in the schemes that they devise.

3 For the wicked boasts of his heart’s cravings.
He blesses the greedy and condemns the Lord.
4 The wicked, with his prideful countenance,
has no room in his thoughts for God.
5 His ways are prosperous at all times.
He is arrogant, and your laws are far from his sight.
As for all his adversaries, he sneers at them.
6 He says in his heart, “I shall not be shaken.
For generations I have had no trouble.”

12 Arise, Lord!
God, lift up your hand!
Do not forget the helpless.
13 Why does the wicked person condemn God,
and say in his heart, “God won’t call me into account?”
14 But you do see trouble and grief.
You consider it, to take it into your hands.
You help the victim and the fatherless.
15 Break the arm of the wicked.
As for the evil man, seek out his wickedness until you find none. 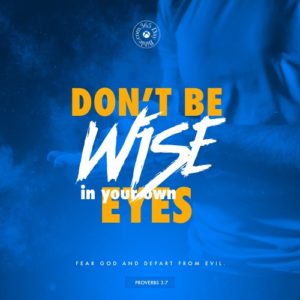 7 Do not be wise in your own eyes.
Fear God, and depart from evil.
8 It will be health to your body,
and nourishment to your bones.