But if you had known what this means, ‘I desire mercy, and not sacrifice, you would not have condemned the guiltless. Matthew 12:7

Jacob Makes an Altar in Bethel

1 God said to Jacob, “Get up, go up to Bethel, and live there. Make an altar there to the Lord, who appeared to you when you fled from the presence of Esau your brother.”

2 Then Jacob said to his household, and to all who were with him, “Put away the foreign gods that are among you, purify yourselves, change your garments. 3 Let us go up to Bethel. I will make an altar there to God, who answered me in my day of distress, and was with me on the way which I went.”

5 They traveled, and a terror from God was on the cities that were around them, and they did not pursue the sons of Jacob. 6 So Jacob came to Luz (that is, Bethel), which is in the land of Canaan, he and all the people who were with him. 7 He built an altar there, and called the place El Beth El; because there God was revealed to him, when he was fleeing from his brother.

8 Deborah, Rebekah’s nurse, died, and she was buried under the oak tree, south of Bethel; so it was called Allon Bacuth (oak of weeping).

9 The Lord appeared to Jacob again, when he came from Paddan Aram, and blessed him. 10 The Lord said to him,

“Your name is Jacob. Your name shall no longer be Jacob,
but your name will be Israel.”

He named him Israel.

“I am the Lord Almighty.
Be fruitful and multiply.
A nation and a company of nations will come from you,
and kings will descend from you.
12 The land which I gave to Abraham and Isaac,
I will give it to you,
and to your offspring after you, I will give the land.”

Birth of Benjamin and Death of Rachel

16 They traveled from Bethel. When it was still some distance to Ephrath, Rachel went into labor, and her labor was difficult.

17 When she was in hard labor, the midwife said to her, “Don’t be afraid, for now you will have another son.” 18 As her soul was departing (for she was dying), she named him Benoni, but his father named him Benjamin.

19 Rachel died, and was buried on the way to Ephrath (also called Bethlehem). 20 Jacob set up a pillar on her grave, and the Pillar of Rachel’s grave is there to this day.

21 Israel traveled, and spread his tent beyond the tower of Eder. 22 While Israel was living in that land, Reuben went in and slept with Bilhah, his father’s concubine, and Israel heard of it.

23 The sons of Leah: Reuben (Jacob’s firstborn), Simeon, Levi, Judah, Issachar, and Zebulun.
24 The sons of Rachel: Joseph and Benjamin.
25 The sons of Bilhah (Rachel’s servant): Dan and Naphtali.
26 The sons of Zilpah (Leah’s servant): Gad and Asher

These are the sons of Jacob, who were born to him in Paddan Aram.

27 Jacob came to Isaac his father, to Mamre, to Kiriath Arba (which is Hebron), where Abraham and Isaac lived as foreigners.

28 Isaac was 180 years old. 29 Isaac gave up his spirit and died, and was gathered to his people, old and full of days. Esau and Jacob, his sons, buried him.

1 Now this is the history of the generations of Esau (that is, Edom).

2 Esau took his wives from the daughters of Canaan: Adah the daughter of Elon, the Hittite; and Oholibamah the daughter of Anah, the granddaughter of Zibeon, the Hivite; 3 and Basemath, Ishmael’s daughter, sister of Nebaioth. 4 Adah bore Eliphaz to Esau. Basemath bore Reuel. 5 Oholibamah bore Jeush, Jalam, and Korah. These are the sons of Esau, who were born to him in the land of Canaan.

6 Esau took his wives, his sons, his daughters, and all the members of his household, with his livestock, all his animals, and all his possessions, which he had gathered in the land of Canaan, and went to a land away from his brother Jacob. 7 For their possessions were too great for them to live together, and the land in which they traveled could not sustain them because of their livestock. 8 Esau (that is, Edom) lived in the hill country of Seir.

9 This is the history of the generations of Esau, the father of the Edomites in the hill country of Seir.

11 The sons of Eliphaz were Teman, Omar, Zepho, and Gatam, and Kenaz. 12 Timna was concubine to Eliphaz, Esau’s son; and she bore to Amalek to Eliphaz. These are the descendants of Adah, Esau’s wife.

19 These are the sons of Esau (that is, Edom), and these are their chiefs.

20 These are the sons of Seir the Horite, the inhabitants of the land: Lotan, Shobal, Zibeon, Anah, 21 Dishon, Ezer, and Dishan. These are the chiefs who came of the Horites, the children of Seir in the land of Edom.

22 The sons of Lotan were Hori and Heman. Lotan’s sister was Timna. 23 These are the sons of Shobal: Alvan, Manahath, Ebal, Shepho, and Onam.

24 These are the sons of Zibeon: Aiah and Anah. This is the Anah who found the hot springs in the wilderness, as he fed the donkeys of his father Zibeon.

25 These are the children of Anah: Dishon and Oholibamah, the daughter of Anah.

31 These are the kings who reigned in the land of Edom, before any king reigned over the Israelites.

32 Bela, the son of Beor, reigned in Edom. The name of his city was Dinhabah.

33 Bela died, and Jobab, the son of Zerah of Bozrah, reigned in his place.

34 Jobab died, and Husham of the land of the Temanites reigned in his place.

35 Husham died, and Hadad, the son of Bedad, who struck Midian in the field of Moab, reigned in his place. The name of his city was Avith.

36 Hadad died, and Samlah of Masrekah reigned in his place.

37 Samlah died, and Shaul of Rehoboth by the river, reigned in his place.

38 Shaul died, and Baal Hanan the son of Achbor reigned in his place.

40 These are the names of the chiefs who came from Esau, according to their families and their places, and by their names: chief Timna, chief Alvah, chief Jetheth, 41 chief Oholibamah, chief Elah, chief Pinon, 42 chief Kenaz, chief Teman, chief Mibzar, 43 chief Magdiel, and chief Iram. These are the chiefs of Edom, according to their settlements in the land of their possession. This is Esau, the father of the Edomites.

The Lord of the Sabbath

1 At that time, Jesus went on the Sabbath day through the grain fields. His disciples were hungry and began to pluck heads of grain and to eat. 2 But the Pharisees, when they saw it, said to him, “Your disciples do what is not lawful to do on the Sabbath.”

5 Or have you not read in the law, that on the Sabbath day, the priests in the temple profane the Sabbath, and are guiltless? 6 But I tell you that one greater than the temple is here. 7 But if you had known what this means, ‘I desire mercy, and not sacrifice, you would not have condemned the guiltless. 8 For the Son of Man is Lord of the Sabbath.”

Jesus Heals on the Sabbath

9 He departed from there, and went into their synagogue. 10 And there was a man with a withered hand. They asked him, “Is it lawful to heal on the Sabbath day?” that they might accuse him.

11 He said to them, “What man is there among you, who has one sheep, and if this one falls into a pit on the Sabbath day, will he not grab it, and lift it out? 12 Of how much more value then is a man than a sheep! Therefore it is lawful to do good on the Sabbath day.” 13 Then he told the man, “Stretch out your hand.” He stretched it out; and it was restored whole, just like the other. 14 But the Pharisees went out, and conspired against him, how they might destroy him.

15 Jesus, perceiving that, withdrew from there. Great multitudes followed him; and he healed all of them, 16 and commanded them that they should not make him known: 17 that it might be fulfilled which was spoken through Isaiah the prophet, saying, 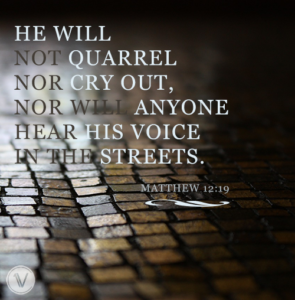 18 “My servant whom I have chosen;
my beloved in whom I delight:
I will put my Spirit on him.
He will proclaim justice to the nations.

19 He will not quarrel or cry out;
nor will anyone hear his voice in the streets.

20 A bruised blade of grass, he will not break off.
A weak flame, he will not quench,
until he leads justice to victory.

1 Lord, who can dwell in your sanctuary?
Who can live on your holy hill?

2 He who walks blamelessly and does what is right,
and speaks truth in his heart;
3 he who does not slander with his tongue,
nor does harm to his friend,
nor slanders against his fellow man;
4 in whose eyes a vile man is despised,
but who honors those who fear the Lord;
he who keeps an oath even when it hurts, and does not change;
5 he who does not lend out his money with interest,
nor take a bribe against the innocent.

He who does these things shall never be shaken.

21 My son, let them not depart from your eyes.
Keep sound wisdom and discretion:
22 so they will be life to your soul,
and grace for your neck.
23 Then you shall walk in your way securely.
Your foot won’t stumble.
24 When you lie down, you will not be afraid.
Yes, you will lie down, and your sleep will be sweet.
25 Do not be afraid of sudden panic,
nor of the desolation of the wicked, when it comes;
26 for the Lord will be your confidence,
and will keep your foot from being taken.