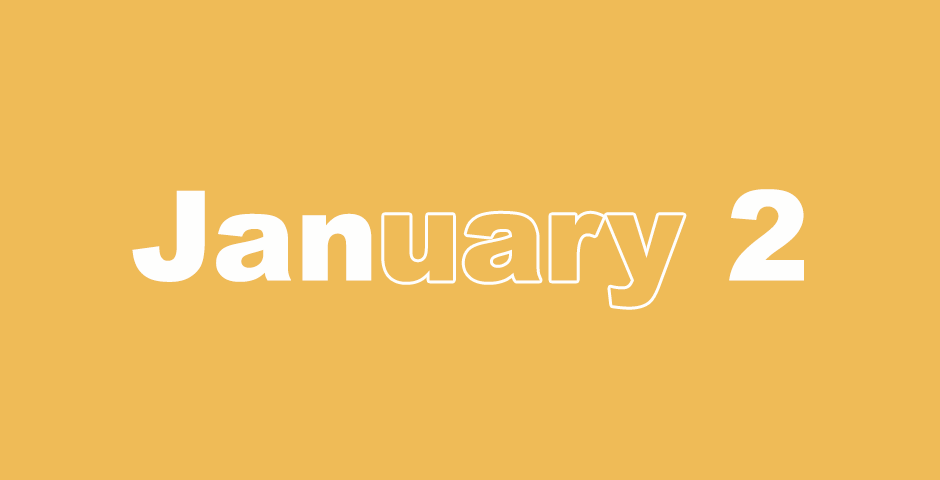 Now the serpent was more subtle than any animal of the field which the Lord God had made. He said to the woman, “Has God really said, ‘You shall not eat of any tree of the garden’?”  Genesis 3:1 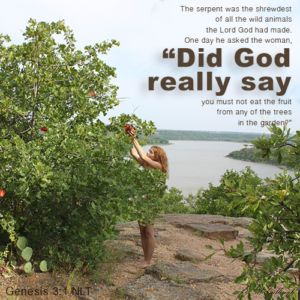 1 Now the serpent was more subtle than any animal of the field which the Lord God had made. He said to the woman, “Has God really said, ‘You shall not eat of any tree of the garden’?”

2 The woman said to the serpent, “We may eat fruit from the trees of the garden, 3 but not the fruit of the tree which is in the middle of the garden. God has said, ‘You shall not eat of it. You shall not touch it, lest you die.’ ”

4 The serpent said to the woman, “You won’t really die, 5 for God knows that on the day you eat it, your eyes will be opened, and you will be like God, knowing good and evil.”

6 When the woman saw that the tree was good for food, and that it was pleasant to look upon, and that it was a tree to be desired for making one wise, she took some of its fruit, and ate it. Then she gave some to her husband with her, and he ate it, too. 7 Their eyes were opened, and they both knew that they were naked. They sewed fig leaves together, and made coverings for themselves.

8 They heard the sound of Lord God walking in the garden in the cool of the day, and the man and his wife hid themselves from the presence of the Lord God, among the trees of the garden.

9 The Lord God called to Adam, and said to him, “Where are you?”

10 Adam said, “I heard your voice in the garden, and I was afraid, because I was naked; so I hid myself.”

11 God said, “Who told you that you were naked? Have you eaten from the tree that I commanded you not to eat from?”

12 The man said, “The woman whom you gave to be with me, she gave me fruit from the tree, and I ate it.”

13 The Lord God said to the woman, “What have you done?”
The woman said, “The serpent deceived me, and I ate.”

14 The Lord God said to the serpent,

“Because you have done this,
you are cursed above all livestock,
and above every animal of the field.
You shall crawl on your belly
and you shall eat dust all the days of your life.

“I will greatly increase your pain in childbirth.
You will bear children in pain.
Your desire will be for your husband,
and he will rule over you.”

“Because you have listened to the voice of your wife,
and have eaten from the tree,
about which I commanded you, saying, ‘You shall not eat of it,’
the ground is cursed because of you.
You will eat from it with much labor all the days of your life.

18 It will yield thorns and thistles to you;
and you will eat the herb of the field.

19 You will eat bread by the sweat of your brow until you return to the ground,
for you were taken from it.
For you are dust,
and you shall return to dust.”

20 The man called his wife Eve because she would be the mother of every living thing.

21 The Lord God made garments of animal skins for Adam and for his wife, and clothed them.

22 The Lord God said, “The man has become like one of us, knowing good and evil. Now, he must not reach out his hand, and also take of the tree of life, and eat, and live forever.”

23 Therefore the Lord God sent him from the garden of Eden, to till the ground from which he was taken. 24 So he drove the man out; and he placed cherubim at the east of the garden of Eden, and a flaming sword which rotated in all directions, to guard the way to the tree of life.

Offerings of Cain and Abel

1 The man slept with Eve his wife. She conceived, and gave birth to Cain, and said,

“I have gotten a man with the help of the Lord.”

2 Again she gave birth, to Cain’s brother Abel. Abel was a keeper of sheep, but Cain was a tiller of the ground.

3 As time passed, Cain brought an offering to the Lord from the fruit of the ground. 4 Abel also brought some of the firstborn of his flock and of its fat. The Lord was pleased with Abel and his offering, 5 but he was not pleased with Cain and his offering. Cain was very angry, and the look on his face was downcast. 6 The Lord said to Cain, “Why are you angry? Why is your countenance downcast? 7 If you do what is right, will it not be accepted? If you do not do what is right, sin crouches at the door. It desires to have you, but you must rule over it.”

13 Cain said to the Lord, “My punishment is greater than I can bear. 14 You have driven me out today from the face of the earth. I will be hidden from your face, and I will be a fugitive and a wanderer in the land. Whoever finds me will kill me.”

15 The Lord said to him, “Therefore whoever slays Cain, vengeance will be taken on him seven-fold.”  The Lord appointed a sign for Cain, so that anyone finding him would not strike him. 16 Cain left the presence of the Lord, and lived in the land of Nod, east of Eden.

17 Cain slept with his wife. She conceived, and gave birth to Enoch. He built a city, and named the city after his son, Enoch.

19 Lamech took two wives: the name of the first one was Adah, and the name of the second one was Zillah. 20 Adah gave birth to Jabal, who was the father of those who dwell in tents and have livestock.

21 His brother’s name was Jubal, who was the father of all who handle the harp and pipe. 22 Zillah also gave birth to Tubal Cain, the forger of every bronze and iron cutting tool. Tubal Cain’s sister was Naamah. 23 Lamech said to his wives,

“Adah and Zillah, hear my voice.
You wives of Lamech, listen to my speech,
for I have slain a man for wounding me,
a young man for bruising me.

The Birth of Seth

25 Adam slept with his wife again. She gave birth to a son, and named him Seth, saying, “For God has given me another child instead of Abel, for Cain killed him.” 26 A son was also born to Seth, and he named him Enosh. At that time men began to call on the name of the Lord.

The Magi Seek the Messiah

1 Now when Jesus was born in Bethlehem of Judea in the days of King Herod, wise men from the east came to Jerusalem, saying, 2 “Where is he who is born King of the Jews? For we saw his star in the east, and have come to worship him.”

3 When King Herod heard it, he was troubled, and all Jerusalem with him. 4 Gathering together all the chief priests and scribes of the people, he asked them where the Messiah would be born.

5 They said to him, “In Bethlehem of Judea, for this is written through the prophet,

6 ‘You Bethlehem, land of Judah,
are in no way least among the princes of Judah:
for out of you shall come a governor,
who shall shepherd my people, Israel.’ ”

7 Then Herod secretly called the wise men, and learned from them exactly what time the star appeared. 8 He sent them to Bethlehem, and said, “Go and search diligently for the young child. When you have found him, bring me word, so that I also may come and worship him.”

9 They, having heard the king, went their way; and the star, which they saw in the east, went before them, until it came and stood over where the young child was. 10 When they saw the star, they rejoiced with exceedingly great joy. 11 They came into the house and saw the young child with Mary, his mother, and they fell down and worshiped him. Opening their treasures, they offered to him gifts: gold, frankincense, and myrrh.

12 Being warned in a dream not to return to Herod, they went back to their own country another way.

13 Now when they had departed, an angel of the Lord appeared to Joseph in a dream, saying, “Get up and take the young child and his mother, and flee into Egypt, and stay there until I tell you, for Herod will seek the young child to destroy him.”

14 He arose and took the young child and his mother by night, and departed into Egypt, 15 and was there until the death of Herod; that it might be fulfilled which was spoken by the Lord through the prophet, saying, “Out of Egypt I called my son.”

Herod Kills the Babies in Bethlehem

16 Then Herod, when he saw that he was mocked by the wise men, was exceedingly angry, and sent out, and killed all the children who were in Bethlehem and in all the surrounding countryside, from two years old and under, according to the exact time which he had learned from the wise men. 17 Then that which was spoken by Jeremiah the prophet was fulfilled, saying,

18 “A voice was heard in Ramah,
lamenting, weeping and great mourning,
Rachel weeping for her children;
she wouldn’t be comforted,
because they are no more.”

19 But when Herod was dead, an angel of the Lord appeared in a dream to Joseph in Egypt, saying, 20 “Get up and take the young child and his mother, and go into the land of Israel, for those who sought the young child’s life are dead.”

21 He arose and took the young child and his mother, and came into the land of Israel. 22 But when he heard that Archelaus was reigning over Judea in the place of his father, Herod, he was afraid to go there. Being warned in a dream, he withdrew into the region of Galilee, 23 and came and lived in a city called Nazareth; that it might be fulfilled which was spoken through the prophets that he will be called a Nazarene.

1 Why do the nations rage,
and the peoples plot in vain?
2 The kings of the earth take a stand,
and the rulers take counsel together,
against the Lord, and against his Anointed, saying,
3 “Let us break their chains asunder,
and throw off their ropes from us.”

4 He who sits in the heavens will laugh.
The Lord mocks them.
5 Then he will speak to them in his anger,
and terrify them in his wrath:
6 “Yet I have set my King on my holy hill of Zion.”

7 I will declare the decree:
the Lord has said to me, you are my son;
this day I have become your father.
8 Ask of me, and I will give the nations as your inheritance,
the uttermost parts of the earth as your possession.
9 You shall break them with a rod of iron.
You shall dash them in pieces like a potter’s vessel.”

10 Now therefore be wise, you kings.
Be instructed, you judges of the earth.
11 Serve the Lord with fear,
and rejoice with trembling.
12 Give sincere homage to the Son,
lest he be angry, and you perish on the way,
for his wrath will soon be kindled.
Blessed are all those who take refuge in him.

7 The fear of the Lord is the beginning of knowledge,
but the foolish despise wisdom and instruction.
8 My son, listen to your father’s instruction,
and do not forsake your mother’s teaching:
9 for they will be a garland to grace your head,
and chains around your neck.