The heavens declare the glory of God.
The skies display his handiwork. Psalm 19:1

1 Israel traveled with all that he had, and came to Beersheba, and offered sacrifices to the God of his father, Isaac. 2 That night God spoke to Israel in a vision, and said, “Jacob, Jacob!”

3 He said, “I am God, the God of your father. Do not be afraid to go down into Egypt, for there I will make of you a great nation. 4 I will go down with you into Egypt. I will also surely bring you up again. Joseph’s hand will close your eyes.”

5 Jacob rose up from Beersheba, and the sons of Israel carried Jacob, their father, their little ones, and their wives, in the wagons which Pharaoh had sent to carry him. 6 They took their livestock, and their goods, which they had gotten in the land of Canaan, and came into Egypt—Jacob, and all his offspring with him, 7 his sons, and his sons’ sons with him, his daughters, and his sons’ daughters, and he brought all of his offspring with him into Egypt.

The Israelites who went to Egypt: Leah’s Descendants

8 These are the names of the Israelites, who came into Egypt, Jacob and his descendants:

9 The sons of Reuben: Hanoch, Pallu, Hezron, and Carmi.

10 The sons of Simeon: Jemuel, Jamin, Ohad, Jachin, Zohar, and Shaul the son of a Canaanite woman.

11 The sons of Levi: Gershon, Kohath, and Merari.

12 The sons of Judah: Er, Onan, Shelah, Perez, and Zerah; but Er and Onan died in the land of Canaan. The sons of Perez were Hezron and Hamul.

13 The sons of Issachar: Tola, Puvah, Iob, and Shimron.

14 The sons of Zebulun: Sered, Elon, and Jahleel.

15 These are the sons of Leah, whom she bore to Jacob in Paddan Aram, along with his daughter Dinah. All of his sons and his daughters came to 33.

17 The sons of Asher: Imnah, Ishvah, Ishvi, Beriah, and Serah their sister.

The sons of Beriah: Heber and Malchiel.

18 These are the sons of Zilpah, whom Laban gave to Leah, his daughter, and these she bore to Jacob, sixteen people.

19 The sons of Rachel, Jacob’s wife: Joseph and Benjamin.

20 To Joseph in the land of Egypt were born Manasseh and Ephraim, whom Asenath, the daughter of Potiphera, priest of On, bore to him.

22 These are the sons of Rachel, who were born to Jacob: all the them came to fourteen.

24 The sons of Naphtali: Jahzeel, Guni, Jezer, and Shillem.

25 These are the sons of Bilhah, whom Laban gave to Rachel, his daughter, and these she bore to Jacob: all the them came to seven.

28 Jacob sent Judah before him to Joseph, to show the way before him to Goshen, and they came into the land of Goshen. 29 Joseph prepared his chariot, and went up to meet Israel, his father, in Goshen. Joseph presented himself to Jacob, and fell onto his shoulders, and wept on his neck for a long time.

30 Israel said to Joseph, “Now let me die, since I have seen your face, that you are still alive.”

33 It will happen, when Pharaoh summons you and says, ‘What is your occupation?’ 34 that you shall say, ‘Your servants have been keepers of livestock from our youth until now, both we, and our fathers:’ that you may dwell in the land of Goshen; for every shepherd is an abomination to the Egyptians.”

1 Then Joseph went in and told Pharaoh, and said, “My father and my brothers, with their flocks, their herds, and all that they own, have come out of the land of Canaan; and they are in the land of Goshen.”

2 From among his brothers he took five men, and presented them to Pharaoh.

3 Pharaoh said to his brothers, “What is your occupation?”

They said to Pharaoh, “Your servants, we and our fathers, are shepherds.”

7 Joseph brought in Jacob, his father, and set him before Pharaoh; and Jacob blessed Pharaoh.

9 Jacob said to Pharaoh, “The years of my pilgrimage are 130 years. My days have been few and tragic. They have not reached the number of years of the life of my fathers in their pilgrimage.”

10 Jacob blessed Pharaoh, and went out from the presence of Pharaoh.

Joseph’s Leadership in the Famine

17 They brought their livestock to Joseph, and Joseph gave them bread in exchange for the horses, and for the flocks, and for the herds, and for the donkeys: and he fed them with bread in exchange for all their livestock for that year. 18 When that year was ended, they came to him the second year, and said to him, “We will not hide from my lord that our money is all spent, and the herds of livestock are my lord’s. There is nothing left in the sight of my lord, but our bodies, and our lands. 19 Why should we die before your eyes, both we and our land? Buy us and our land for bread, and we and our land will be servants to Pharaoh. Give us seed, that we may live, and not die, and that the land will not be desolate.”

20 So Joseph bought all the land of Egypt for Pharaoh, for every man of the Egyptians sold his field, because the famine was severe, and the land became Pharaoh’s. 21 As for the people, he moved them to the cities from one end of the border of Egypt to the other end of it. 22 Only he did not buy the land of the priests, for the priests had a portion from Pharaoh, and ate their portion which Pharaoh gave them. That is why they did not sell their land.

23 Then Joseph said to the people, “I have bought you and your land today for Pharaoh. Here is seed for you, and you shall sow the land. 24 It will happen at the harvests, that you shall give 20 percent of it to Pharaoh, and 80 percent of it will be your own, for the seed of the field, for your food, for those of your households, and for food for your little ones.”

25 They said, “You have saved our lives! Let us find favor in the sight of my lord, and we will be Pharaoh’s servants.”

26 Joseph made it a statute concerning the land of Egypt to this day, that 20 percent belongs to Pharaoh. Only the land of the priests did not become Pharaoh’s.

29 The time came near that Israel must die, and he called his son Joseph, and said to him, “If now I have found favor in your sight, please put your hand under my thigh, and deal kindly and truly with me. Please do not bury me in Egypt, 30 but when I sleep with my fathers, you shall carry me out of Egypt, and bury me in their burial place.”

Joseph said, “I will do as you have said.”

He swore to him. Then Israel bowed down at the head of the bed.

1 Then Pharisees and scribes came to Jesus from Jerusalem, saying, 2 “Why do your disciples disobey the tradition of the elders? For they do not wash their hands when they eat bread.”

3 He answered them, “Why do you also disobey the commandment of God because of your tradition? 4 For God commanded, ‘Honor your father and your mother,’ and, ‘He who speaks evil of father or mother, let him be put to death.’ 5 But you say, ‘Whoever may tell his father or his mother, “Whatever help you might otherwise have gotten from me is a gift devoted to God,” 6 he shall not honor his father or mother.’ You have made the commandment of God void because of your tradition. 7 You hypocrites! Well did Isaiah prophesy of you, saying,

9 And in vain do they worship me,
teaching as doctrine rules made by men.’ ”

What Defiles a Man

10 He summoned the multitude, and said to them, “Listen and understand. 11 That which enters into the mouth does not defile the man; but that which proceeds from the mouth, this defiles the man.”

12 Then the disciples came and said to him, “Do you know that the Pharisees were offended when they heard this?”

13 But he answered, “Every plant which my heavenly Father did not plant will be uprooted. 14 Leave them alone. They are blind guides of the blind. If the blind guide the blind, both will fall into a pit.”

15 Peter answered him, “Explain the parable to us.”

The Faith of the Canaanite Woman

21 Jesus went out from there, and withdrew into the region of Tyre and Sidon. 22 A Canaanite woman came out from those borders, and cried, “Have mercy on me, Lord, son of David! My daughter is severely possessed by a demon!”

23 But he answered her not a word.
His disciples came and begged him, “Send her away; for is crying out after us.”

24 But he answered, “I was not sent to anyone but the lost sheep of the house of Israel.”

26 But he answered, “It is not appropriate to take the children’s bread and throw it to the dogs.”

27 But she said, “Yes, Lord, but even the dogs eat the crumbs which fall from their masters’ table.”

28 Then Jesus answered her, “Woman, great is your faith! Be it done to you just as you desire.” And her daughter was healed from that hour. 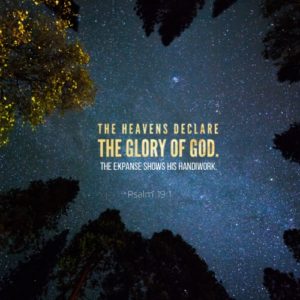 1 The heavens declare the glory of God.
The skies display his handiwork.
2 Day after day they pour out speech,
and night after night they display knowledge.
3 There is no speech nor language,
where their voice is not heard.
4 Their voice has gone out through all the earth,
their words to the end of the world.
In them he has set a tent for the sun,
5 like a bridegroom coming out of his room;
an athlete rejoicing to run his course.
6 Its rising is from one end of the heavens,
and its circuit to the other end.
There is nothing hidden from its heat.

7 The law of the Lord is perfect, restoring the soul.
The covenant of the Lord is sure, making wise the simple.
8 The precepts of the Lord are right, rejoicing the heart.
The commandments of the Lord are pure and enlightening.
9 The fear of the Lord is pure, enduring forever.
The ordinances of Lord are altogether true and righteous.
10 They are to be desired more than gold, yes, than much fine gold,
sweeter also than honey and the extract of the honeycomb.
11 Moreover your servant is warned by them.
In keeping them there is great reward.
12 Who can discern his errors?
Forgive me from hidden errors.

13 Keep back your servant also from presumptuous sins.
Let them not have dominion over me.
Then I will be upright.
I will be blameless and innocent of great transgression.
14 Let the words of my mouth and the meditation of my heart
be acceptable in your sight,
O Lord, my rock, and my redeemer.

14 Do not enter into the path of the wicked.
Do not walk in the way of evil men.
15 Avoid it, and do not pass by it.
Turn from it, and pass on.
16 For they can’t sleep unless they are doing evil.
They can’t sleep, unless they are making someone fall.
17 For they eat the bread of wickedness
and drink the wine of violence.
18 But the path of the righteous is like the dawning light
that shines brighter and brighter until the fullness of day.
19 The way of the wicked is like darkness.
They don’t know what they stumble over.