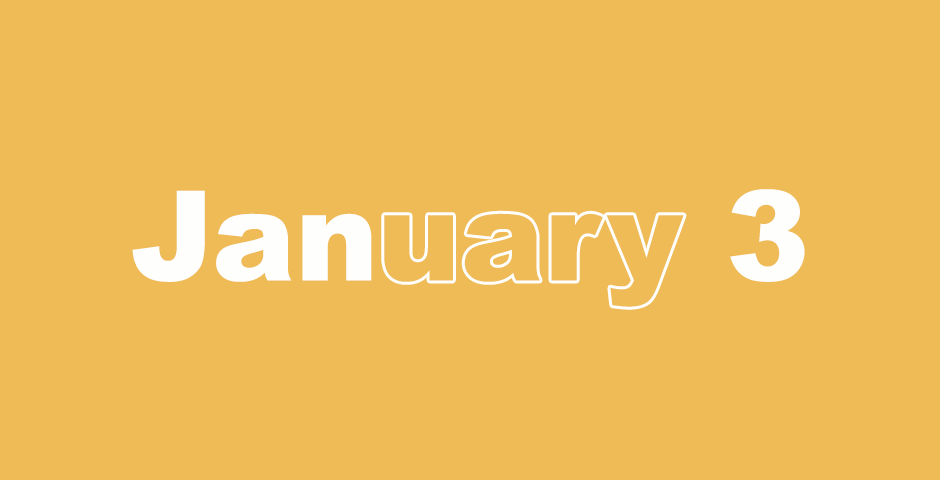 God said to Noah, “Come with all of your household into the ship, for I have seen your righteousness before Me in this generation. Genesis 7:1

The Genealogy of Adam

1 This is the book of the genealogy of Adam. On the day that God created man, he made him in God’s likeness. 2 He created them male and female, and blessed them. On the day they were created, he named them man.

24 Enoch walked with God, and he was not found, for God took him.

32 Noah was 500 years old, then Noah became the father of Shem, Ham, and Japheth.

The Wickedness of Man

1 When men began to multiply on the surface of the earth, and daughters were born to them, 2 the sons of God saw that the daughters of men were beautiful, and they took any that they wanted for themselves as wives.

3 The Lord said, “My Spirit will not contend with man forever because he also is flesh, so his days will be 120 years.”

4 The Nephilimp were on the earth in those days, and also after that, when the sons of God came in to the daughters of men and had children with them. Those were the mighty men of old who were men of renown.

5 The Lord saw that the wickedness of man was great on the earth and that every imagination of the thoughts of man’s heart was continually only evil. 6 The Lord was sorry that he had made man on the earth, and it grieved his heart.

7 The Lord said, “I will destroy man whom I have created from the surface of the earth—man, along with animals, creeping things, and birds of the sky—for I am sorry that I have made them.”

8 But Noah found favor in the eyes of the Lord.

9 This is the history of the generations of Noah: Noah was a righteous man, blameless among the people of his time. Noah walked with God.

10 Noah became the father of three sons: Shem, Ham, and Japheth. 11 The earth was corrupt before God, and the earth was filled with violence. 12 God saw the earth, and saw that it was corrupt, for all flesh had corrupted their way on the earth.

13 God said to Noah, “I will bring an end to all flesh, for the earth is filled with violence through them. I will destroy them and the earth. 14 Make a ship of gopher wood. You shall make rooms in the ship and shall seal it inside and outside with pitch. 15 This is how you shall make it. The length of the ship shall be 300 cubits, its width 50 cubits, and its height 30 cubits. 16 You shall make a roof in the ship, and you shall finish it to a cubit upward. You shall set the door of the ship in its side. You shall make it with lower, second, and third levels. 17 I, yes I, will bring the flood of waters on this earth, to destroy all flesh having the breath of life from under the sky. Everything in the earth will die.

18 But I will establish my covenant with you. You shall come into the ship, you, your sons, your wife, and your sons’ wives with you.

19 Of every living thing of all flesh, you shall bring two of every sort into the ship, to keep them alive with you. They shall be male and female.

21 Take with you some of all food that is eaten, and gather it to yourself; and it will be for food for you, and for them.” 22 Thus Noah did. He did all that God commanded him.

Animals in the Ark 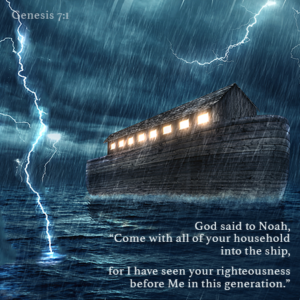 1 The Lord said to Noah, “Come with all of your household into the ship, for I have seen your righteousness before me in this generation. 2 You shall take seven pairs of every clean animal with you, the male and his female. Of the animals that are not clean, take two, the male and its female. 3 Also of the birds of the sky, seven and seven, male and female, to keep seed alive on the surface of all the earth.

4 In seven days, I will cause it to rain on the earth for 40 days and 40 nights. I will destroy every living thing that I have made from the surface of the earth.”

5 Noah did everything that God commanded him.

Forty Days and Nights of Rain

6 Noah was 600 years old when the flood of waters came on the earth. 7 Noah went into the ship with his sons, his wife, and his sons’ wives, because of the floodwaters.

8 Clean animals, unclean animals, birds, and everything that creeps on the ground 9 went by pairs to Noah into the ship, male and female, as God commanded Noah. 10 After the seven days, the floodwaters came on the earth. 11 In the 600th year of Noah’s life, in the second month, on the seventeenth day of the month, on that day all the fountains of the great deep burst open, and the sky’s windows opened.

13 On the same day Noah, and Shem, Ham, and Japheth—the sons of Noah—and Noah’s wife and the three wives of his sons with them, entered into the ship— 14 they, and every animal after its kind, all the livestock after their kind, every creeping thing that creeps on the earth after its kind, and every bird after its kind, every bird of every sort. 15 Pairs from all flesh with the breath of life in them went into the ship to Noah. 16 Those who went in, went in male and female of all flesh, as God commanded him; then the Lord shut him in.

21 All flesh died that moved on the earth, including birds, livestock, animals, every creeping thing that creeps on the earth, and every man. 22 All on the dry land, in whose nostrils was the breath of the spirit of life, died. 23 Every living thing was destroyed that was on the surface of the ground, including man, livestock, creeping things, and birds of the sky. They were destroyed from the earth. Only Noah was left and those who were with him in the ship. 24 The waters flooded the earth for 150 days.

John the Baptist Prepares the Way

1 In those days, John the Baptist came, preaching in the wilderness of Judea, saying, 2 “Repent, for the Kingdom of Heaven is at hand!” 3 For this is he who was spoken of by Isaiah the prophet, saying,

“The voice of one crying in the wilderness,
make the way of the Lord ready!
Make his paths straight!”

4 Now John himself wore clothing made of camel’s hair, with a leather belt around his waist. His food was locusts and wild honey. 5 Then people from Jerusalem, all of Judea, and all the region around the Jordan went out to him. 6 They were baptized by him in the Jordan, confessing their sins. 7 But when he saw many of the Pharisees and Sadducees coming for his baptism, he said to them, “You offspring of vipers! Who warned you to flee from the wrath to come? 8 Therefore produce fruit worthy of repentance! 9 Don’t think to yourselves, ‘We have Abraham for our father,’ for I tell you that God is able to raise up children to Abraham from these stones. 10 “Even now the ax lies at the root of the trees. Therefore every tree that does not produce good fruit is cut down, and cast into the fire.

11 I indeed baptize you in water for repentance, but he who comes after me is mightier than I, whose sandals I am not worthy to carry. He will baptize you in the Holy Spirit.

12 His winnowing fork is in his hand, and he will thoroughly cleanse his threshing floor. He will gather his wheat into the barn, but the chaff he will burn up with unquenchable fire.”

Jesus Baptized by John the Baptist

15 But Jesus, answering, said to him, “Allow it now, for this is the fitting way for us to fulfill all righteousness.” Then he allowed him. 16 Jesus, when he was baptized, went up directly from the water, and the heavens were opened to him. He saw the Spirit of God descending as a dove and coming on him. 17 A voice from the heavens said, “This is my beloved Son, with whom I am well pleased.”

1 Lord, how my adversaries have increased!
Many are those who rise up against me.
2 Many there are who say of me,
“There is no help for him in God.”

3 But you, O Lord, are a shield around me,
my glory and the one who lifts up my head.
4 I cry to the Lord with my voice,
and he answers me out of his holy hill.

5 I laid myself down and slept.
I awakened; for the Lord sustains me.
6 I will not be afraid of tens of thousands of people
who have set themselves against me on every side.
7 Arise, O Lord!
Save me, my God!
For you have struck all of my enemies on the cheek bone.
You have broken the teeth of the wicked.
8 Salvation belongs to the Lord.
May your blessing be on your people.

10 My son, if sinners entice you,
do  not consent.
11 If they say, “Come with us.
Let’s lay in wait for blood.
Let’s lurk secretly for the innocent without cause.
12 Let’s swallow them up alive like Sheol,†
and whole, like those who go down into the pit.
13 We’ll find all valuable wealth.
We’ll fill our houses with plunder.
14 You shall cast your lot among us.
We’ll all have one purse.”
15 My son, do not walk on the path with them.
Keep your foot from their path,
16 for their feet run to evil.
They hurry to shed blood.
17 For the net is spread in vain in the sight of any bird;
18 but these lay in wait for their own blood.
They lurk secretly for their own lives.
19 So are the ways of everyone who is greedy for gain.
It takes away the life of its owners.