But you, Lord, are a shield around me, my glory, and the one who lifts up my head. Psalm 3:3

5 The sons of Japheth:

6 The sons of Gomer: Ashkenaz, Diphath, and Togarmah.
7 The sons of Javan: Elishah, Tarshish, Kittim, and Rodanim.

9 The sons of Cush: Seba, Havilah, Sabta, Raama, Sabteca. The sons of Raamah: Sheba and Dedan.

10 Cush fathered Nimrod. He began to be a mighty one on the earth.

13 Canaan fathered Sidon his firstborn, Heth, 14 the Jebusites, and the Amorites, the Girgashites, 15 the Hivites, the Arkites, the Sinites, 16 the Arvadites, the Zemarites, and the Hamathites.

The sons of Aram:
Uz, Hul, Gether, and Meshech.

19 To Eber were born two sons: the name of the one was Peleg, for in his days the earth was divided, and his brother’s name was Joktan.

28 The sons of Abraham: Isaac and Ishmael. 29 These are their generations:

The firstborn of Ishmael, Nebaioth, then Kedar, Adbeel, Mibsam, 30 Mishma, Dumah, Massa, Hadad, Tema, 31 Jetur, Naphish, and Kedemah. These are the sons of Ishmael.

The sons of Jokshan: Sheba and Dedan.

33 The sons of Midian: Ephah, Epher, Hanoch, Abida, and Eldaah.

All these were the sons of Keturah.

34 Abraham fathered Isaac. The sons of Isaac: Esau and Israel.

37 The sons of Reuel: Nahath, Zerah, Shammah, and Mizzah.

39 The sons of Lotan: Hori and Homam; and Timna was Lotan’s sister.

40 The sons of Shobal: Alian, Manahath, Ebal, Shephi, and Onam. The sons of Zibeon: Aiah and Anah.

The Rulers of Edom

43 Now these are the kings who reigned in the land of Edom, before any king reigned over the Israelites:

Bela the son of Beor, and the name of his city was Dinhabah.

44 Bela died, and Jobab the son of Zerah of Bozrah reigned in his place.

45 Jobab died, and Husham of the land of the Temanites reigned in his place.

46 Husham died, and Hadad the son of Bedad, who struck Midian in the field of Moab, reigned in his place; and the name of his city was Avith.

47 Hadad died, and Samlah of Masrekah reigned in his place.

48 Samlah died, and Shaul of Rehoboth by the River reigned in his place.

49 Shaul died, and Baal Hanan the son of Achbor reigned in his place.

The Sons of Israel

1 These are the sons of Israel:

3 The sons of Judah:

Er, Onan, and Shelah, which three were born to him of Shua’s daughter the Canaanitess. Er, Judah’s firstborn, was wicked in the sight of the Lord, and he killed him. 4 Tamar his daughter-in-law bore him Perez and Zerah. All the sons of Judah were five.

5 The sons of Perez: Hezron and Hamul.

6 The sons of Zerah: Zimri, Ethan, Heman, Calcol, and Dara; five of them in all.

7 The son of Carmi: Achar, who brought disaster to Israel by trespassing in things set apart for the Lord.

8 The son of Ethan: Azariah.

9 The sons also of Hezron, who were born to him: Jerahmeel, Ram, and Chelubai.

10 Ram fathered Amminadab, and Amminadab fathered Nahshon, a leader of the descendants of Judah.

The Children of Jesse

13 Jesse fathered his firstborn Eliab, and Abinadab the second, and Shimea the third, 14 Nethanel the fourth, Raddai the fifth, 15 Ozem the sixth, David the seventh; 16 and their sisters were Zeruiah and Abigail. The sons of Zeruiah: Abishai, Joab, and Asahel, three. 17 Abigail bore Amasa, and Jether the Ishmaelite fathered Amasa.

18 Caleb the son of Hezron fathered sons by his wife Azubah (and by Jerioth), and these were her sons: Jesher, Shobab, and Ardon. 19 Azubah died, and Caleb married Ephrath who bore him Hur. 20 Hur fathered Uri, and Uri fathered Bezalel.

21 Afterward Hezron went into the daughter of Machir the father of Gilead, whom he took as wife when he was 60 years old, and she bore him Segub.

22 Segub fathered Jair, who had 23 cities in the land of Gilead. 23 Geshur and Aram took the towns of Jair from them, with Kenath, and its villages, 60 cities. All these were the sons of Machir the father of Gilead.

24 After Hezron died in Caleb Ephrathah, Abijah Hezron’s wife bore him Ashhur the father of Tekoa.

26 Jerahmeel had another wife, whose name was Atarah. She was the mother of Onam.

27 The sons of Ram the firstborn of Jerahmeel were Maaz, Jamin, and Eker.

28 The sons of Onam were Shammai and Jada.
The sons of Shammai: Nadab and Abishur. 29 The name of the wife of Abishur was Abihail, and she bore him Ahban and Molid.

30 The sons of Nadab: Seled and Appaim, but Seled died without children.

32 The sons of Jada the brother of Shammai: Jether and Jonathan, and Jether died without children.

33 The sons of Jonathan: Peleth and Zaza. These were the sons of Jerahmeel.

34 Now Sheshan had no sons, but daughters. Sheshan had a servant, an Egyptian, whose name was Jarha. 35 Sheshan gave his daughter to Jarha his servant as wife, and she bore him Attai.

The Clan of Caleb

42 The sons of Caleb the brother of Jerahmeel were:

43 The sons of Hebron were:
Korah, Tappuah, Rekem, and Shema. 44 Shema fathered Raham, the father of Jorkeam; and Rekem fathered Shammai. 45 The son of Shammai was Maon, and Maon was the father of Beth Zur.

47 The sons of Jahdai were:
Regem, Jothan, Geshan, Pelet, Ephah, and Shaaph.

52 Shobal the father of Kiriath Jearim had sons:
Haroeh, half of the Menuhoth. 53 The families of Kiriath Jearim: the Ithrites, the Puthites, the Shumathites, and the Mishraites. From them came the Zorathites and the Eshtaolites.

54 The sons of Salma:
Bethlehem, the Netophathites, Atroth Beth Joab, and half of the Manahathites, the Zorites. 55 The families of scribes who lived at Jabez: the Tirathites, the Shimeathites, and the Sucathites. These are the Kenites who came from Hammath, the father of the house of Rechab.

The Plot to Kill Paul

12 When it was day, some of the Jews banded together and bound themselves under a curse, saying that they would neither eat nor drink until they had killed Paul. 13 There were more than 40 people who had formed this conspiracy.

14 They came to the chief priests and the elders and said, “We have bound ourselves under a great curse to taste nothing until we have killed Paul. 15 Now you, along with the council, inform the commanding officer that he should bring Paul down to you tomorrow, as though you were going to judge his case more exactly. We are prepared to kill him before he gets close.”

16 But Paul’s sister’s son heard they were lying in wait, and he came and entered into the barracks and told Paul. 17 Paul summoned one of the centurions and said, “Bring this young man to the commanding officer, for he has something to tell him.”

18 So he took him and brought him to the commanding officer and said, “Paul, the prisoner, summoned me and asked me to bring this young man to you. He has something to tell you.”

19 The commanding officer took him by the hand and going aside, asked him privately, “What is it that you have to tell me?”

20 He said, “The Jews have agreed to ask you to bring Paul down to the council tomorrow, as though intending to inquire somewhat more accurately concerning him. 21 Therefore don’t yield to them, for more than 40 men lie in wait for him, who have bound themselves under a curse to neither eat nor drink until they have killed him. They are now prepared, looking for consent from you.”

22 So the commanding officer let the young man go, charging him, “Tell no one that you have revealed these things to me.”

Paul Sent to Felix at Caesarea

23 The commanding officer called two of the centurions to himself and said, “Prepare 200 soldiers to go as far as Caesarea, with 70 horsemen and 200 men armed with spears, at the third hour of the night.” 24 He asked them to provide animals, that they might set Paul on one and bring him safely to Felix the governor.

26 “Claudius Lysias to the most excellent governor Felix: Greetings.

27 This man was seized by the Jews and was about to be killed by them when I came with the soldiers and rescued him, having learned that he was a Roman. 28 Desiring to know the cause of why they accused him, I brought him down to their council. 29 I found him to be accused about questions of their law, but not to be charged with anything worthy of death or of imprisonment. 30 When I was told that the Jews lay in wait for the man, I sent him to you immediately, charging his accusers also to bring their accusations against him before you. Farewell.”

31 So the soldiers, carrying out their orders, took Paul and brought him by night to Antipatris. 32 But the next day they left the horsemen to go with him and returned to the barracks. 33 When they came to Caesarea and delivered the letter to the governor, they also presented Paul to him. 34 When the governor had read it, he asked what province he was from. When he understood that he was from Cilicia, he said, 35 “I will hear you fully when your accusers also arrive,” and he commanded that he be kept in Herod’s palace.

1 Lord, how my adversaries have increased!
Many are those who rise up against me.
2 Many there are who say of me,
“There is no help for him from God.” 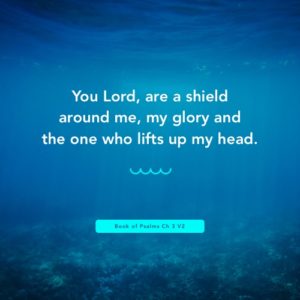 3 But you, Lord, are a shield around me,
my glory and the one who lifts up my head.
4 I cry to the Lord with my voice,
and he answers me from his holy hill.

5 I lie down and sleep.
I awaken, for the Lord sustains me.
6 I will not be afraid of tens of thousands of people
who have set themselves against me on every side.
7 Arise, Lord!
Save me, my God!
For you have struck all of my enemies on the cheek bone.
You have broken the teeth of the wicked.
8 Salvation belongs to the Lord.
May your blessing be on your people.

14 A man’s spirit will sustain him in sickness,
but a crushed spirit, who can bear?
15 The heart of the discerning gets knowledge.
The ear of the wise seeks knowledge.