But know that the Lord has set apart for himself him who is godly. The Lord will hear when I call to him. Psalm 4:2

1 Now these were the sons of David, who were born to him in Hebron:

The firstborn, Amnon, of Ahinoam the Jezreelitess;
the second, Daniel, of Abigail the Carmelitess;
2 the third, Absalom the son of Maacah the daughter of Talmai king of Geshur;
the fourth, Adonijah the son of Haggith;
3 the fifth, Shephatiah of Abital;
the sixth, Ithream by Eglah his wife.

4 These six were born to him in Hebron, and he reigned there seven years and six months.

Shimea, Shobab, Nathan, and Solomon; these four from Bathshua the daughter of Ammiel;

9 All these were the sons of David, in addition to the sons of the concubines, and Tamar was their sister.

15 The sons of Josiah: the firstborn Johanan, the second Jehoiakim, the third Zedekiah, and the fourth Shallum.

16 The sons of Jehoiakim: Jeconiah his son, and Zedekiah his son.

17 The sons of Jeconiah, the captive:

19 The sons of Pedaiah: Zerubbabel and Shimei.

The sons of Zerubbabel: Meshullam and Hananiah, and Shelomith was their sister; 20 and five others: Hashubah, Ohel, Berechiah, Hasadiah, and Jushab Hesed.

22 The descendants of Shecaniah were six: Shemaiah, and the sons of Shemaiah:
Hattush, Igal, Bariah, Neariah, and Shaphat.

23 The sons of Neariah were three: Elioenai, Hizkiah, and Azrikam.

1 The descendants of Judah:

These are the sons of Hur, the firstborn of Ephrathah, the father of Bethlehem.

5 Ashhur the father of Tekoa had two wives, Helah and Naarah.

7 The sons of Helah were Zereth, Izhar, and Ethnan. 8 Hakkoz became the father of Anub, Zobebah, and the families of Aharhel the son of Harum.

The Prayer of Jabez

9 Jabez was more honorable than his brothers. His mother named him Jabez, saying, “Because I bore him with sorrow.”

10 Jabez called on the God of Israel, saying, “Oh that you would bless me indeed and enlarge my territory! May your hand be with me and may you keep me from evil, that I may not cause pain!”

God granted him that which he requested.

11 Chelub the brother of Shuhah became the father of Mehir, who was the father of Eshton. 12 Eshton fathered Beth Rapha, Paseah, and Tehinnah fathered Nahash. These are the men of Recah.

13 The sons of Kenaz: Othniel and Seraiah.

The sons of Othniel: Hathath.

15 The sons of Caleb the son of Jephunneh: Iru, Elah, and Naam.

The son of Elah: Kenaz.

17 The sons of Ezrah: Jether, Mered, Epher, and Jalon; and she bore Miriam, Shammai, and Ishbah the father of Eshtemoa. 18 His wife the Jewess bore Jered the father of Gedor, Heber the father of Soco, and Jekuthiel the father of Zanoah. These are the sons of Bithiah the daughter of Pharaoh, whom Mered took.

19 The sons of the wife of Hodiah, the sister of Naham, were the father of Keilah the Garmite, and Eshtemoa the Maacathite.

20 The sons of Shimon: Amnon, Rinnah, Ben Hanan, and Tilon. The sons of Ishi: Zoheth, and Ben Zoheth.

The Sons of Shelah

21 The sons of Shelah the son of Judah:

Er the father of Lecah, Laadah the father of Mareshah, and the families of the house of those who worked fine linen, of the house of Ashbea; 22 and Jokim, and the men of Cozeba, and Joash, and Saraph, who had dominion in Moab, and Jashubilehem. These records are ancient. 23 These were the potters, and the inhabitants of Netaim and Gederah: they lived there with the king for his work.

The Descendants and Cities of Simeon

26 The sons of Mishma: Hammuel his son, Zaccur his son, Shimei his son.

27 Shimei had sixteen sons and six daughters, but his brothers did not have many children, and all their family did not multiply like the children of Judah. 28 They lived at Beersheba, Moladah, Hazarshual, 29 at Bilhah, at Ezem, at Tolad, 30 at Bethuel, at Hormah, at Ziklag, 31 at Beth Marcaboth, Hazar Susim, at Beth Biri, and at Shaaraim. These were their cities until David’s reign. 32 Their villages were Etam, Ain, Rimmon, Tochen, and Ashan, five cities; 33 and all their villages that were around the same cities, to Baal. These were their settlements, and they have their genealogy.

Their Conquest of Gedor

39 They went to the entrance of Gedor, to the east side of the valley, to seek pasture for their flocks. 40 They found fat pasture and good, and the land was wide, and quiet, and peaceful; for those who lived there before were descended from Ham.

41 These written by name came in the days of Hezekiah king of Judah, and attacked their tents. The Meunim who were found there, and they destroyed them utterly to this day, and lived in their place; because there was pasture there for their flocks. 42 Some of them, of the sons of Simeon, 500 men, went to Mount Seir, having for their captains Pelatiah, Neariah, Rephaiah, and Uzziel, the sons of Ishi. 43 They attacked the remnant of the Amalekites who escaped, and have lived there to this day.

1 After five days, the high priest, Ananias, came down with certain elders and an orator, one Tertullus. They informed the governor against Paul.

2 When Paul was called, Tertullus began to accuse him, saying, “Seeing that by you we enjoy much peace, and that prosperity is coming to this nation by your foresight, 3 we accept it in all ways and in all places, most excellent Felix, with all thankfulness. 4 But that I don’t delay you, I entreat you to bear with us and hear a few words.

5 We have found this man to be a plague, an instigator of insurrections among all the Jews throughout the world, and a ringleader of the sect of the Nazarenes. 6 He even tried to profane the temple, and we arrested him and wanted to judge him according to our law. 7 But Lysias, the commander, came by and with great violence, took him away, out of our hands. 8 By examining him yourself you may ascertain all these things of which we accuse him.” 9 The Jews also joined in the attack, affirming that these things were so.

10 When the governor had beckoned to him to speak, Paul answered,

“Because I know that you have been a judge of this nation for many years, I cheerfully make my defense, 11 seeing that you can verify that it is not more than twelve days since I went up to worship at Jerusalem. 12 In the temple they didn’t find me disputing with anyone or stirring up a crowd, either in the synagogues, or in the city. 13 Nor can they prove to you the things of which they now accuse me.

14 But this I confess to you, that after the Way, which they call a sect, so I serve the God of our fathers, believing all things which are according to the law, and which are written in the prophets; 15 having hope toward God, which these also themselves look for, that there will be a resurrection of the dead, both of the just and unjust. 16 In this I also practice always having a conscience void of offense toward God and men.

17 Now after some years, I came to bring gifts for the needy to my nation, and offerings; 18 amid which certain Jews from Asia found me purified in the temple, not with a mob, nor with turmoil. 19 They ought to have been here before you, and to make accusation, if they had anything against me. 20 Or else let these men themselves say what injustice they found in me when I stood before the council, 21 unless it is for this one thing that I cried standing among them, ‘Concerning the resurrection of the dead I am being judged before you today!’ ”

22 But Felix, having more exact knowledge concerning the Way, deferred them, saying, “When Lysias, the commanding officer, comes down, I will decide your case.” 23 He ordered the centurion that Paul should be kept in custody, and should have some privileges, and not to forbid any of his friends to serve him or to visit him.

24 But after some days, Felix came with Drusilla, his wife, who was a Jewess, and sent for Paul, and heard him concerning the faith in Christ Jesus. 25 As he reasoned about righteousness, self-control, and the judgment to come, Felix was terrified, and answered, “Go your way for this time, and when it is convenient for me, I will summon you.” 26 Meanwhile, he also hoped that money would be given to him by Paul, that he might release him. Therefore also he sent for him more often and talked with him.

27 But when two years were fulfilled, Felix was succeeded by Porcius Festus, and desiring to gain favor with the Jews, Felix left Paul in bonds.

1 Answer me when I call, God of my righteousness.
Give me relief from my distress.
Have mercy on me, and hear my prayer.
2 You sons of men, how long shall my glory be turned into dishonor?
Will you love vanity and seek after falsehood? 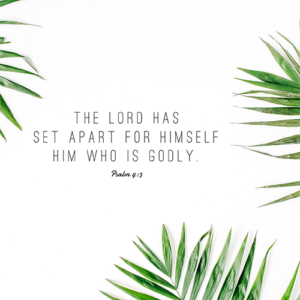 3 But know that the Lord has set apart for himself him who is godly:
The Lord will hear when I call to him.
4 Stand in awe, and do not sin.
Search your own heart on your bed, and be still.

5 Offer the sacrifices of righteousness.
Put your trust in the Lord.
6 Many say, “Who will show us any good?”
O Lord, let the light of your face shine on us.
7 You have put gladness in my heart,
more than when their grain and their new wine are increased.
8 In peace I will both lay myself down and sleep,
for you alone, O Lord, make me live in safety.

16 A man’s gift makes room for him,
and brings him before great men.
17 He who pleads his cause first seems right;
until another co . mes and questions him.
18 The lot settles disputes,
and keeps strong ones apart.