For you will bless the righteous. God, you will surround him with favor as with a shield. Psalm 5:12

3 The sons of Reuben the firstborn of Israel: Hanoch, Pallu, Hezron, and Carmi.

Beerah was a leader of the Reubenites. 7 His brothers by their families, when the genealogy of their generations was listed: the chief, Jeiel, and Zechariah, 8 and Bela the son of Azaz, the son of Shema, the son of Joel, who lived in Aroer, to Nebo and Baal Meon, 9 and he lived eastward to the entrance of the wilderness from the river Euphrates because their livestock were multiplied in the land of Gilead.

10 In the days of Saul, they waged war with the Hagrites, who fell by their hand, and they lived in their tents throughout all the land east of Gilead.

11 The descendants of Gad lived beside the Reubenites, in the land of Bashan to Salecah:

12 Joel the chief, Shapham the second, Janai, and Shaphat in Bashan.

13 Their relatives, by family: Michael, Meshullam, Sheba, Jorai, Jacan, Zia, and Eber. There were seven.

14 These were the sons of Abihail:

16 They lived in Gilead in Bashan, and in its towns, and in all the pasture lands of Sharon, as far as their borders. 17 All these were listed by genealogies in the days of Jotham king of Judah, and in the days of Jeroboam king of Israel.

18 The descendants of Reuben, the Gadites, and the half-tribe of Manasseh, of valiant men, men able to bear buckler and sword, and to shoot with bow, and skillful in war, were 44,760 that were able to go out to war. 19 They waged war with the Hagrites, with Jetur, and Naphish, and Nodab.

20 They were helped against them, and the Hagrites were delivered into their hand, and all who were with them, for they cried to God in battle, and he answered them because they put their trust in him. 21 They took their livestock; 50,000 of their camels, 250,000 of their sheep, and 2,000 of their donkeys; and of their men, 100,000. 22 For many fell slain because the battle belonged to God. They lived in their place until the captivity.

The Half-Tribe of Manasseh

25 They trespassed against the God of their fathers and played the prostitute after the gods of the peoples of the land, whom God destroyed before them. 26 So the God of Israel stirred up the spirit of Pul king of Assyria, and the spirit of Tilgath Pilneser king of Assyria, and he carried them away, the Reubenites, and the Gadites, and the half-tribe of Manasseh, and brought them to Halah, Habor, Hara, and to the river of Gozan, to this day.

1 The sons of Levi: Gershon, Kohath, and Merari.

2 The sons of Kohath: Amram, Izhar, and Hebron, and Uzziel.

16 The sons of Levi: Gershom, Kohath, and Merari.
17 These are the names of the sons of Gershom: Libni and Shimei.
18 The sons of Kohath were Amram, Izhar, Hebron, and Uzziel.
19 The sons of Merari: Mahli and Mushi. These are the families of the Levites according to their fathers’ households.

28 The sons of Samuel: the firstborn, Joel, and the second, Abijah.

1 Festus therefore, having come into the province, after three days went up to Jerusalem from Caesarea. 2 Then the high priest and the Jewish leaders brought their case against Paul before Festus, and they begged him, 3 asking a favor against Paul, that Festus would summon Paul to Jerusalem, plotting to kill him on the way. 4 However Festus answered that Paul should be kept in custody at Caesarea and that he himself was about to depart shortly. 5 “Let them therefore”, he said, “that are in power among you go down with me, and if there is anything wrong in the man, let them accuse him.”

6 When he had stayed among them more than ten days, he went down to Caesarea, and the next day he sat on the judgment seat and commanded Paul to be brought.

7 When he had come, the Jews who had come down from Jerusalem stood around him, bringing against him many serious charges which they could not prove, 8 while Paul said in his defense, “Neither against the law of the Jews, nor against the temple, nor against Caesar, have I sinned at all.”

9 But Festus, desiring to gain favor with the Jews, answered Paul and said, “Are you willing to go up to Jerusalem, and be judged by me there concerning these things?”

10 But Paul said, “I am standing before Caesar’s judgment seat, where I ought to be tried. I have done no wrong to the Jews, as you also know very well. 11 For if I have done wrong and have committed anything worthy of death, I don’t refuse to die, but if none of those things are true that they accuse me of, no one can give me up to them. I appeal to Caesar!”

12 Then Festus, when he had conferred with the council, answered, “You have appealed to Caesar. To Caesar you shall go.”

13 Now when some days had passed, King Agrippa and Bernice arrived at Caesarea, and greeted Festus. 14 As he stayed there many days, Festus laid Paul’s case before the king, saying, “There is a certain man left a prisoner by Felix, 15 about whom, when I was at Jerusalem, the chief priests and the elders of the Jews informed me, asking for a sentence against him.

16 I answered them that it is not the custom of the Romans to give up any man to destruction before the accused has met the accusers face to face and has had opportunity to make his defense concerning the matter laid against him. 17 When therefore they had come together here, I didn’t delay, but the next day sat on the judgment seat and commanded the man to be brought.

18 When the accusers stood up, they brought no charges against him of such things as I supposed, 19 but had certain questions against him about their own religion, and about one Jesus, who was dead, whom Paul affirmed to be alive. 20 Being perplexed how to inquire concerning these things, I asked whether he was willing to go to Jerusalem and there be judged concerning these matters. 21 But when Paul had appealed to be kept for the decision of the emperor, I commanded him to be kept until I could send him to Caesar.”

22 Agrippa said to Festus, “I also would like to hear the man myself.”
“Tomorrow,” he said, “you shall hear him.”

Paul Before Agrippa and Bernice

23 So the next day, when Agrippa and Bernice had come with great pomp, and they had entered into the place of hearing with the commanding officers and the principal men of the city, at the command of Festus, Paul was brought in.

24 Festus said, “King Agrippa, and all men who are here present with us, you see this man about whom all the multitude of the Jews petitioned me, both at Jerusalem and here, crying that he ought not to live any longer. 25 But when I found that he had committed nothing worthy of death, and as he himself appealed to the emperor I determined to send him, 26 of whom I have no certain thing to write to my lord. Therefore I have brought him out before you, and especially before you, King Agrippa, that, after examination, I may have something to write. 27 For it seems to me unreasonable, in sending a prisoner, not to also specify the charges against him.”

1 Give ear to my words, Lord.
Consider my meditation.
2 Listen to the cry of my voice, my King and my God,
for I pray to you.

3 Lord, in the morning you will hear my voice.
In the morning I will lay my requests before you and will watch expectantly.

4 For you are not a God who has pleasure in wickedness.
Evil cannot dwell with you.
5 The arrogant will not stand in your sight.
You hate all workers of iniquity.
6 You will destroy those who speak lies.
The Lord abhors the bloodthirsty and deceitful man.

8 Lead me, Lord, in your righteousness because of my enemies.
Make your way straight before me. 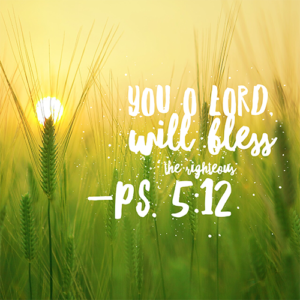 9 For there is no faithfulness in their mouth.
Their heart is destruction.
Their throat is an open tomb.
They flatter with their tongue.

10 Hold them guilty, God.
Let them fall by their own counsels.
Thrust them out in the multitude of their transgressions,
for they have rebelled against you.

11 But let all those who take refuge in you rejoice.
Let them always shout for joy, because you defend them.
Let them also who love your name be joyful in you.
12 For you, Lord, will bless the righteous.
You will surround him with favor like a shield.

19 A brother offended is more difficult than a fortified city.
Disputes are like the bars of a fortress.