Whoever finds a wife finds a good thing and obtains favor from the Lord. Proverbs 18:22

1 Of the sons of Issachar:

Tola, and Puah, Jashub, and Shimron–four in all.

2 The sons of Tola:
Uzzi, Rephaiah, Jeriel, Jahmai, Ibsam, and Shemuel, heads of their fathers’ houses, of Tola; mighty men of valor in their generations. Their number in the days of David was 22,600.

3 The son of Uzzi: Izrahiah.
The sons of Izrahiah: Michael, Obadiah, Joel, and Isshiah. All five of them were leading men. 4 With them, according to the genealogical records of their families, were 36,000, with bands of the army prepared for war, for they had many wives and sons. 5 Among all the tribesmen of Issachar, mighty men of valor, listed by genealogy, were 87,000.

6 The sons of Benjamin:

Bela, Becher, and Jediael–three in all.

7 The sons of Bela:
Ezbon, Uzzi, Uzziel, Jerimoth, and Iri–five in all; heads of fathers’ houses, mighty men of valor; and they were listed by genealogy 22,034.

8 The sons of Becher:
Zemirah, Joash, Eliezer, Elioenai, Omri, Jeremoth, Abijah, Anathoth, and Alemeth. All these were the sons of Becher. 9 They were listed by genealogy, after their generations, heads of their fathers’ houses, mighty men of valor, 20,200.

10 The son of Jediael:
Bilhan.
The sons of Bilhan: Jeush, Benjamin, Ehud, Chenaanah, Zethan, Tarshish, and Ahishahar. 11 All these were sons of Jediael, according to the heads of their fathers’ households, mighty men of valor, 17,200, who were able to go out in the army for war. 12 So were Shuppim, Huppim, the sons of Ir, Hushim, and the sons of Aher.

13 The sons of Naphtali:

14 The sons of Manasseh:

Asriel, whom his concubine the Aramitess bore. She bore Machir the father of Gilead. 15 Machir took a wife of Huppim and Shuppim, whose sister’s name was Maacah. The name of the second was Zelophehad; and Zelophehad had daughters. 16 Maacah the wife of Machir bore a son, and she named him Peresh. The name of his brother was Sheresh; and his sons were Ulam and Rakem.

Bedan.
These were the sons of Gilead the son of Machir, the son of Manasseh. 18 His sister Hammolecheth bore Ishhod, Abiezer, and Mahlah. 19 The sons of Shemida were Ahian, Shechem, Likhi, and Aniam.

The Sons of Asher

Imnah, Ishvah, Ishvi, and Beriah. Serah was their sister.

31 The sons of Beriah:
Heber and Malchiel, who was the father of Birzaith.

32 Heber became the father of Japhlet, Shomer, Hotham, and Shua their sister.

35 The sons of Helem his brother: Zophah, Imna, Shelesh, and Amal.

38 The sons of Jether: Jephunneh, Pispa, and Ara.

40 All these were the descendants of Asher, heads of the fathers’ houses, choice and mighty men of valor, chief of the princes. The number of them listed by genealogy for service in war was 26,000 men.

Geneology from Benjamin to Saul

1 Benjamin fathered Bela his firstborn, Ashbel the second, Aharah the third, 2 Nohah the fourth, and Rapha the fifth.

6 These are the sons of Ehud. These are the heads of fathers’ households of the inhabitants of Geba, who were carried captive to Manahath: 7

Naaman, Ahijah, and Gera, who carried them captive; and he became the father of Uzza and Ahihud.

8 Shaharaim became the father of children in the field of Moab, after he had divorced Hushim and Baara, his wives. 9 By Hodesh his wife, he became the father of Jobab, Zibia, Mesha, Malcam, 10 Jeuz, Shachia, and Mirmah. These were his sons, heads of fathers’ households.

11 By Hushim, he became the father of Abitub and Elpaal.

28 These were heads of fathers’ households throughout their generations, leading men. They lived in Jerusalem.

29 The father of Gibeon, whose wife’s name was Maacah, lived in Gibeon, 30 with his firstborn son Abdon, Zur, Kish, Baal, Nadab, 31 Gedor, Ahio, and Zecher. 32 Mikloth became the father of Shimeah. They also lived with their brothers in Jerusalem, near their brothers.

34 The son of Jonathan was Merib Baal. Merib Baal became the father of Micah.

35 The sons of Micah were Pithon, Melech, Tarea, and Ahaz.

37 Moza became the father of Binea. Raphah was his son, Eleasah his son, and Azel his son.

38 Azel had six sons, whose names are these: Azrikam, Bocheru, Ishmael, Sheariah, Obadiah, and Hanan. All these were the sons of Azel.

39 The sons of Eshek his brother: Ulam his firstborn, Jeush the second, and Eliphelet the third. 40 The sons of Ulam were mighty men of valor, archers, and had many sons and grandsons, 150 in all.

All these were of the sons of Benjamin.

1 When it was determined that we should sail for Italy, they delivered Paul and certain other prisoners to a centurion named Julius, of the Augustan band. 2 Embarking in a ship of Adramyttium, which was about to sail to places on the coast of Asia, we put to sea, Aristarchus, a Macedonian of Thessalonica, being with us.

3 The next day, we touched at Sidon. Julius treated Paul kindly, and gave him permission to go to his friends and refresh himself. 4 Putting out to sea from there, we sailed under the lee of Cyprus, because the winds were against us. 5 When we had sailed across the sea which is off Cilicia and Pamphylia, we came to Myra, a city of Lycia. 6 There the centurion found a ship of Alexandria sailing for Italy, and he put us on board.

7 When we had sailed slowly many days, and had come with difficulty opposite Cnidus, the wind not allowing us further, we sailed under the lee of Crete, opposite Salmone. 8 With difficulty sailing along it, we came to a certain place called Fair Havens, near the city of Lasea.

9 When much time had passed, and the voyage was now dangerous because the Fast had now already passed, Paul admonished them 10 and said to them, “Sirs, I perceive that the voyage will be with injury and much loss, not only the cargo and the ship, but also of our lives.”

11 But the centurion gave more heed to the master and to the owner of the ship than to those things which were spoken by Paul. 12 Because the haven was not suitable to winter in, the majority advised going to sea from there, if by any means they could reach Phoenix and winter there, which is a port of Crete, looking southwest and northwest.

The Storm at Sea

13 When the south wind blew softly, and they surmised that they had achieved their purpose, they weighed anchor and sailed along Crete, close to shore. 14 But before long, a stormy wind, called the northeaster, beat down from the land. 15 When the ship was caught and could not face the wind, we gave way to it and were driven along.

16 Running under the side of a small island that was sheltered from the wind, called Clauda, we were able, with difficulty, to secure the boat. 17 After they had hoisted it up, they used cables to help reinforce the ship. Fearing that they would run aground on the Syrtis sand bars, they lowered the sea anchor, and so were driven along.

18 As we labored exceedingly with the storm, the next day they began to throw things overboard. 19 On the third day, they threw out the ship’s tackle with their own hands. 20 When neither sun nor stars shone on us for many days, and no small storm pressed on us, all hope that we would be saved was now gone.

21 When they had been long without food, Paul stood up in the midst of them, and said, “Sirs, you should have listened to me, and not have set sail from Crete and have gotten this injury and loss. 22 Now I exhort you to cheer up, for there will be no loss of life among you, but only of the ship. 23 For there stood by me this night an angel, belonging to the God whose I am and whom I serve, 24 saying,

‘Do not be afraid, Paul. You must stand before Caesar. God has granted you all those who sail with you.’

25 Therefore, sirs, cheer up! For I believe God, that it will be just as it has been spoken to me. 26 But we must run aground on a certain island.”

A meditation by David, which he sang to God, concerning the words of Cush, the Benjamite.

1 Lord, my God, I take refuge in you.
Save me from all those who pursue me, and deliver me,
2 lest they tear apart my soul like a lion,
ripping it in pieces, while there is no one to deliver.

3 Lord, my God, if I have done this,
if there is iniquity in my hands,
4 if I have rewarded evil to him who was at peace with me
(yes, I have delivered him who without cause was my adversary),
5 let the enemy pursue me, and overtake me;
yes, let him tread my life down to the earth,
and lay my glory in the dust.

6 Arise, O Lord, in your anger.
Lift yourself up against the rage of my adversaries.
Awake for me. You have commanded judgment.
7 Let the congregation of the peoples surround you.
Rule over them on high.
8 The Lord administers judgment to the peoples.
Judge me, Lord, according to my righteousness,
and to the integrity that is in me.
9 Oh let the wickedness of the wicked come to an end,
but establish the righteous;
their minds and hearts are searched by the righteous God.

10 My shield is with God,
who saves the upright in heart.

11 The Lord is a righteous judge,
yes, a God who has indignation every day.

12 If a man does not repent,
God will sharpen his sword;
he has bent and strung his bow.
13 He has also prepared for himself the instruments of death.
He makes ready his flaming arrows.

14 He travails with iniquity.
Yes, he has conceived mischief,
and brought out falsehood.
15 He has dug a hole,
and has fallen into the pit which he made.
16 The trouble he causes shall return to his own head.
His violence shall come down on the crown of his own head.
17 I will give thanks to the Lord according to his righteousness,
and will sing praise to the name of the Lord Most High. 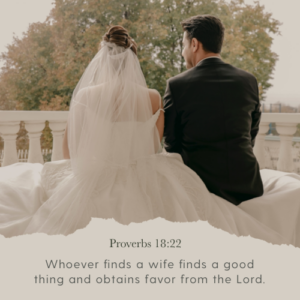 22 Whoever finds a wife finds a good thing
and obtains favor from the Lord.