1 Now when Athaliah the mother of Ahaziah saw that her son was dead, she arose and destroyed all the royal offspring. 2 But Jehosheba, the daughter of king Joram, sister of Ahaziah, took Joash the son of Ahaziah and stole him away from among the king’s sons who were slain, and put him and his nurse in the bedroom. They hid him from Athaliah so that he was not slain. 3 He was with her hidden in the house of the Lord for six years while Athaliah reigned over the land.

9 The captains over hundreds did according to all that Jehoiada the priest commanded, and they each took his men, those who were to come in on the Sabbath, with those who were to go out on the Sabbath, and came to Jehoiada the priest. 10 The priest delivered to the captains over hundreds, the spears and shields that had been king David’s, which were in the house of the Lord. 11 The guards stood, every man with his weapons in his hand, from the right side of the house to the left side of the house, along the altar and the house, around the king. 12 Then he brought out the king’s son, and put the crown on him and gave him the covenant, and they made him king, and anointed him, and they clapped their hands and said, “Long live the king!”

The Death of Athaliah

13 When Athaliah heard the noise of the guard and of the people, she went to the people into the house of the Lord, 14 and she looked, and there the king stood by the pillar, as the tradition was, with the captains and the trumpets by the king. All the people of the land were rejoicing, and blowing trumpets. Then Athaliah tore her clothes and cried, “Treason! Treason!”

15 Jehoiada the priest commanded the captains of hundreds who were set over the army, and said to them, “Bring her out between the ranks. Kill with the sword, anyone who follows her.” For the priest said, “Don’t let her be slain in the house of the Lord.” 16 So they made way for her, and she went by the way of the horses’ entry to the king’s house, and she was slain there.

Jehoiada Restores the Worship of God

1 Jehoash began to reign in the seventh year of Jehu, and he reigned 40 years in Jerusalem. His mother’s name was Zibiah of Beersheba. 2 Jehoash did that which was right in the sight of the Lord all his days in which Jehoiada the priest instructed him. 3 However the high places were not taken away. The people still sacrificed and burned incense in the high places.

The Reign of Joash Ends

17 Then Hazael king of Syria went up, and fought against Gath, and took it, and Hazael set his face to go up to Jerusalem. 18 Jehoash king of Judah took all the holy things that Jehoshaphat and Jehoram and Ahaziah, his fathers, kings of Judah, had dedicated, and his own holy things, and all the gold that was found in the treasures of the house of the Lord, and of the king’s house, and sent it to Hazael king of Syria; and he went away from Jerusalem.

19 Now the rest of the acts of Joash, and all that he did, are they not written in the book of the chronicles of the kings of Judah? 20 His servants arose, and made a conspiracy, and struck Joash at the house of Millo, on the way that goes down to Silla. 21 For Jozacar the son of Shimeath, and Jehozabad the son of Shomer, his servants, struck him, and he died; and they buried him with his fathers in the city of David; and Amaziah his son reigned in his place.

1 After these things Paul departed from Athens, and came to Corinth. 2 He found a certain Jew named Aquila, a native of Pontus, who had recently come from Italy with his wife Priscilla, because Claudius had commanded all the Jews to depart from Rome. He came to them, 3 and because he practiced the same trade, he lived with them and worked, for by trade they were tent makers. 4 He reasoned in the synagogue every Sabbath and persuaded Jews and Greeks.

5 But when Silas and Timothy came down from Macedonia, Paul was compelled by the Spirit, testifying to the Jews that Jesus was the Christ. 6 When they opposed him and blasphemed, he shook out his clothing and said to them, “Your blood be on your own heads! I am clean. From now on, I will go to the Gentiles!”

7 He departed there, and went into the house of a certain man named Justus, one who worshiped God, whose house was next door to the synagogue.

8 Crispus, the ruler of the synagogue, believed in the Lord with all his house. Many of the Corinthians, when they heard, believed and were baptized. 9 The Lord said to Paul in the night through a vision, “Do not be afraid, but speak and do not be silent; 10 for I am with you, and no one will attack you to harm you, for I have many people in this city.”

11 He lived there a year and six months, teaching the word of God among them.

12 But when Gallio was proconsul of Achaia, the Jews, in one accord, rose up against Paul and brought him before the judgment seat, 13 saying, “This man persuades men to worship God contrary to the law.”

14 But when Paul was about to open his mouth, Gallio said to the Jews, “If indeed it were a matter of crime or wrongdoing, it would be reasonable that I should bear with you Jews; 15 but if the questions are about words and names and your own law, look into it yourselves. For I do not want to be a judge in these matters.” 16 So he drove them from the judgment seat.

17 Then all the Greeks seized Sosthenes, the ruler of the synagogue, and beat him in front of the judgment seat. Gallio did not care about any of these things.

18 Paul, having stayed after this many more days, took his leave of the brothers, and sailed from there for Syria, together with Priscilla and Aquila. He shaved his head in Cenchreae, for he had made a vow. 19 He came to Ephesus, and he left them there; but he himself entered into the synagogue and reasoned with the Jews. 20 When they asked him to stay with them a longer time, he declined; 21 but taking his leave of them, he said, “I must by all means keep this coming feast in Jerusalem, but I will return again to you if God wills it.” Then he set sail from Ephesus.

22 When he had landed at Caesarea, he went up and greeted the assembly, and went down to Antioch.

A praise psalm by David. 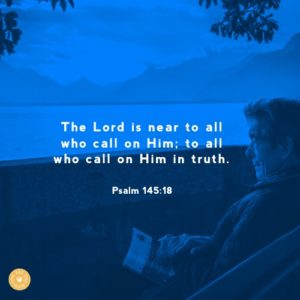 3 Great is the Lord, and greatly to be praised!
His greatness is unsearchable.
4 One generation will commend your works to another,
and will declare your mighty acts.
5 I will meditate on the glorious majesty of your honor,
on your wondrous works.
6 Men will speak of the might of your awesome acts.
I will declare your greatness.
7 They will utter the memory of your great goodness,
and will sing of your righteousness.

8 The Lord is gracious, merciful,
slow to anger, and of great loving kindness.
9 The Lord is good to all.
His tender mercies are over all his works.
10 All your works will give thanks to you, Lord.
Your saints will extol you.
11 They will speak of the glory of your kingdom,
and talk about your power,
12 to make known to the sons of men his mighty acts,
the glory of the majesty of his kingdom.
13 Your kingdom is an everlasting kingdom.
Your dominion endures throughout all generations.
The Lord is faithful in all his words,
and loving in all his deeds.

14 The Lord upholds all who fall,
and raises up all those who are bowed down. 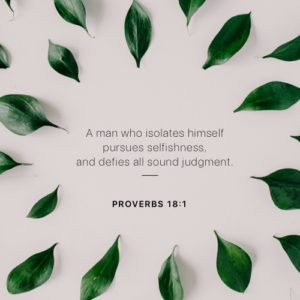 15 The eyes of all wait for you.
You give them their food in due season.
16 You open your hand,
and satisfy the desire of every living thing.

17 The Lord is righteous in all his ways,
and gracious in all his works.
18 The Lord is near to all who call on him,
to all who call on him in truth.
19 He will fulfill the desire of those who fear him.
He also will hear their cry, and will save them.
20 The Lord preserves all those who love him,
but he will destroy all the wicked.
21 My mouth will speak the praise of the Lord.
Let all flesh bless his holy name forever and ever.

1 A man who isolates himself pursues selfishness,
and defies all sound judgment.