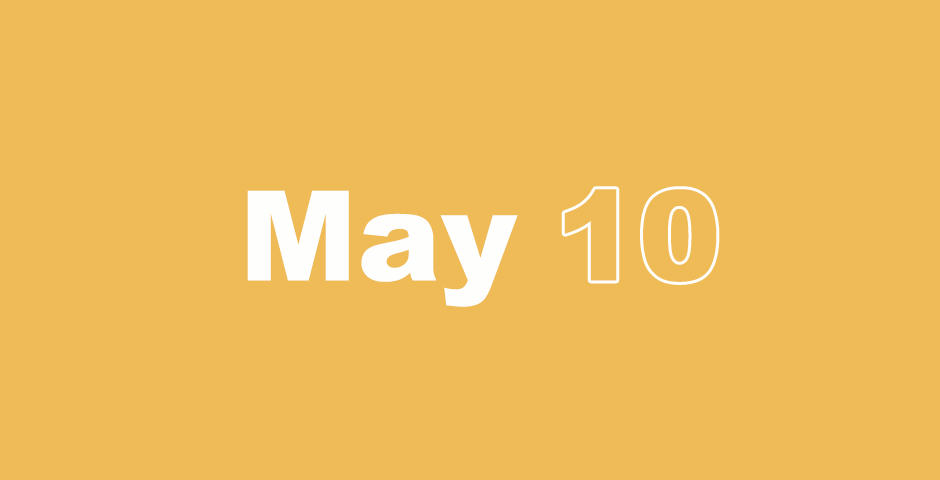 Righteousness exalts a nation, but sin is a disgrace to any people. Proverbs 14:34

1 When Samuel was old, he made his sons judges over Israel. 2 Now the name of his firstborn was Joel; and the name of his second, Abijah. They were judges in Beersheba. 3 His sons did not walk in his ways, but turned away after dishonest gain, took bribes, and perverted justice.

10 Samuel told all the Lord’s words to the people who asked him for a king. 11 He said, “This will be the way of the king who shall reign over you: he will take your sons, and appoint them as his servants, for his chariots, and to be his horsemen; and they will run before his chariots.

15 He will take ten percent of your seed, and of your vineyards, and give it to his officers, and to his servants.

Samuel prayed to the Lord. 7 The Lord said to Samuel, “Listen to the voice of the people in all that they tell you; for they have not rejected you, but they have rejected me as the king over them. 8 According to all the works which they have done since the day that I brought them up out of Egypt to this day, in that they have forsaken me, and served other gods, so they also do to you. 9 Now therefore listen to their voice. However you shall protest solemnly to them, and shall show them the way of the king who will reign over them.”

17 He will take ten percent of your flocks; and you will be his servants. 18 You will cry out in that day because of your king whom you will have chosen for yourselves; and the Lord will not answer you in that day.”

The Lord Grants the Request

19 But the people refused to listen to the voice of Samuel; and they said, “No; but we will have a king over us, 20 that we also may be like all the nations, and that our king may judge us, and go out before us, and fight our battles.”

21 Samuel heard all the words of the people, and he rehearsed them in the ears of the Lord. 22 The Lord said to Samuel, “Listen to their voice, and make them a king.”  Samuel said to the men of Israel, “Everyone go to your own city.”

5 When they had come to the land of Zuph, Saul said to his servant who was with him, “Come! Let’s return, lest my father stop caring about the donkeys, and be anxious for us.”

6 The servant said to him, “Now, there is a man of God in this city, and he is a man who is held in honor. All that he says surely happens. Now let’s go there. Perhaps he can tell us which way to go.”

7 Then Saul said to his servant, “But if we go, what should we bring the man? For the bread is spent in our sacks, and there is not a present to bring to the man of God. What do we have?”

8 The servant answered Saul again, and said, “I have in my hand one fourth of a shekel of silver. I will give that to the man of God, to tell us our way.” 9 (In earlier times in Israel, when a man went to inquire of the Lord, he said, “Come! Let’s go to the seer;” for he who is now called a prophet was before called a seer.)

10 Then Saul said to his servant, “Well said. Come! Let’s go.” So they went to the city where the man of God was. 11 As they went up the ascent to the city, they found young maidens going out to draw water, and said to them, “Is the seer here?”

12 They answered them, and said, “He is. He is before you. Hurry now, for he has come today into the city; for the people have a sacrifice today in the high place. 13 As soon as you have come into the city, you will immediately find him, before he goes up to the high place to eat; for the people will not eat until he comes, because he blesses the sacrifice. Afterwards those who are invited eat. Now therefore go up; for at this time you will find him.”

14 They went up to the city. As they came within the city Samuel came out toward them, to go up to the high place.

15 Now the Lord had revealed to Samuel a day before Saul came, saying, 16 “Tomorrow about this time I will send you a man out of the land of Benjamin, and you shall anoint him to be ruler over my people Israel. He will save my people from the hand of the Philistines; for I have looked upon my people, because their cry has come to me.”

17 When Samuel saw Saul, the Lord said to him, “Here is the man of whom I have spoken to you! He will have authority over my people.”

18 Then Saul approached Samuel in the gateway, and said, “Please tell me where the seer’s house is.”

19 Samuel answered Saul, and said, “I am the seer. Go up before me to the high place, for you are to eat with me today. In the morning I will let you go, and will tell you all that is in your heart. 20 As for your donkeys who were lost three days ago, do not set your mind on them; for they have been found. For whom is it that all that Israel desires? Is it not you, and all your father’s house?”

21 Saul answered, “Am I not a Benjamite, of the smallest of the tribes of Israel? And my family the least of all the families of the tribe of Benjamin? Why then do you speak to me like this?”

22 Samuel took Saul and his servant, and brought them into the guest room, and made them sit in the best place among those who were invited, who were about 30 people. 23 Samuel said to the cook, “Bring the portion which I gave you, the one I said to you, ‘Set it aside.’ ” 24 The cook took up the thigh, and that which was on it, and set it before Saul. Samuel said, “That which has been reserved is set before you. Eat, because it has been kept for you since the appointed time when I said, ‘I have invited the people.’ ” So Saul ate with Samuel that day.

25 When they had come down from the high place into the city, he talked with Saul on the housetop. 26 They rose early, and about daybreak Samuel called to Saul on the housetop, saying, “Get up, that I may send you on your way.” Saul arose, and they both went outside, he and Samuel, together. 27 As they were going down at the end of the city, Samuel said to Saul, “Tell the servant to go on ahead of us,” and he went ahead. Then Samuel said, “But stand here a while, that I may make known to you the Lord’s message.”

22 The next day, the multitude that stood on the other side of the sea saw that there was no other boat there, except the one in which his disciples had embarked, and that Jesus had not entered with his disciples into the boat, but his disciples had gone away alone. 23 However boats from Tiberias came near to the place where they ate the bread after the Lord had given thanks. 24 When the multitude therefore saw that Jesus wasn’t there, nor his disciples, they themselves got into the boats, and came to Capernaum, seeking Jesus. 25 When they found him on the other side of the sea, they asked him, “Rabbi, when did you come here?”

Jesus the Bread of Life

28 They said therefore to him, “What must we do, that we may work the works of God?”

29 Jesus answered them, “This is the work of God, that you believe in him whom he has sent.”

30 They said therefore to him, “What then do you do for a sign, that we may see and believe you? What work do you do? 31 Our fathers ate the manna in the wilderness. As it is written, ‘He gave them bread from heaven to eat.’ ”

32 Jesus therefore said to them, “Most certainly, I tell you, it was not Moses who gave you the bread from heaven, but my Father gives you the true bread out of heaven. 33 For the bread of God is that which comes down out of heaven, and gives life to the world.”

34 They said therefore to him, “Lord, always give us this bread.” 35 Jesus said to them, “I am the bread of life. Whoever comes to me will not be hungry, and whoever believes in me will never be thirsty. 36 But I told you that you have seen me, and yet you don’t believe. 37 All those whom the Father gives me will come to me. He who comes to me I will in no way throw out. 38 For I have come down from heaven, not to do my own will, but the will of him who sent me. 39 This is the will of my Father who sent me, that of all he has given to me I should lose nothing, but should raise him up at the last day. 40 This is the will of the one who sent me, that everyone who sees the Son, and believes in him, should have eternal life; and I will raise him up at the last day.”

41 The Jews therefore murmured concerning him, because he said, “I am the bread which came down out of heaven.” 42 They said, “Isn’t this Jesus, the son of Joseph, whose father and mother we know? How then does he say, ‘I have come down out of heaven?’ ”

32 They angered him also at the waters of Meribah,
so that Moses was troubled for their sakes;
33 because they were rebellious against his spirit,
he spoke rashly with his lips.
34 They did not destroy the peoples,
as the Lord commanded them,
35 but mixed themselves with the nations,
and learned their works.
36 They served their idols,
which became a snare to them.
37 Yes, they sacrificed their sons and their daughters to demons.

38 They shed innocent blood,
the blood of their sons and of their daughters,
whom they sacrificed to the idols of Canaan.
The land was polluted with blood.

39 Thus they were defiled with their works,
and prostituted themselves in their deeds.
40 Therefore the Lord burned with anger against his people.
He abhorred his inheritance.
41 He gave them into the hand of the nations.
Those who hated them ruled over them.
42 Their enemies also oppressed them.
They were brought into subjection under their hand.

43 He rescued them many times,
but they were rebellious in their counsel,
and were brought low in their iniquity.
44 Nevertheless he regarded their distress,
when he heard their cry.
45 He remembered for them his covenant,
and repented according to the multitude of his loving kindnesses.

46 He made them also to be pitied
by all those who carried them captive.
47 Save us, O Lord, our God, gather us from among the nations,
to give thanks to your holy name,
to triumph in your praise!

48 Blessed be the Lord, the God of Israel,
from everlasting even to everlasting!
Let all the people say, “Amen.”
Praise the Lord! 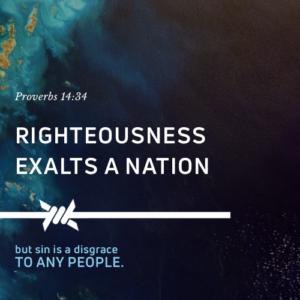 34 Righteousness exalts a nation,
but sin is a disgrace to any people.
35 The king’s favor is toward a servant who deals wisely, but his wrath is toward one who causes shame.