Mourning the Tribe of Benjamin

1 Now the men of Israel had sworn in Mizpah, saying, “None of us will give his daughter to Benjamin as a wife.” 2 The people came to Bethel and sat there until evening before the Lord, and raised their voices, and wept bitterly. 3 They said, “Lord, the God of Israel, why has this happened in Israel, that there should be one tribe lacking in Israel today?”

4 The next day, the people rose early and built an altar there, and offered burnt offerings and peace offerings.

6 The Israelites grieved for Benjamin their brother, and said, “There is one tribe cut off from Israel today. 7 How shall we provide wives for those who remain, since we have sworn by the Lord that we will not give them wives from our daughters?”

8 They said, “Which one from the tribes of Israel did not come up to the Lord to Mizpah?” No one had come to the camp from Jabesh Gilead to the assembly. 9 For when the people were counted, indeed, none of the inhabitants of Jabesh Gilead were there.

10 The congregation sent 12,000 of the most valiant men there, and commanded them, saying, “Go and strike the inhabitants of Jabesh Gilead with the edge of the sword, along with the women and the little ones. 11 This is the thing that you shall do: you shall utterly destroy every male, and every woman who has lain with a man.” 12 They found among the inhabitants of Jabesh Gilead 400 young virgins who had not known any man by lying with him; and they brought them to the camp to Shiloh, which is in the land of Canaan.

13 The whole congregation sent messengers to the Benjaminites who were at the rock of Rimmon, and proclaimed peace to them. 14 Benjamin returned at that time; and they gave them the women whom they had kept alive from the women of Jabesh Gilead. There still were not enough for them.

15 The people grieved for Benjamin, because the Lord had made a breach in the tribes of Israel. 16 Then the elders of the congregation said, “How shall we provide wives for those who remain, since the Benjaminite women have been destroyed?” 17 They said, “There must be an inheritance for the survivors of Benjamin, that a tribe not be blotted out from Israel. 18 However, we may not give them wives from among our daughters, for the Israelites had sworn, saying, ‘Cursed is he who gives a wife to Benjamin.’ ” 19 They said, “There is a feast of the Lord from year to year in Shiloh, which is on the north of Bethel, on the east side of the highway that goes up from Bethel to Shechem, and on the south of Lebonah.”

20 They commanded the Benjaminites, saying, “Go and lie in wait in the vineyards, 21 and watch, and if the daughters of Shiloh come out to dance in the dances, then come out of the vineyards, and each man catch his wife from the daughters of Shiloh, and go to the land of Benjamin. 22 It shall be, when their fathers or their brothers come to complain to us, that we will say to them, ‘Grant them graciously to us, because we didn’t take a wife for each man in battle, neither did you give them to them; otherwise you would now be guilty.’ ”

23 The Benjaminites did so, and took wives for themselves according to their number, of those who danced, whom they carried off. They went and returned to their inheritance, built the cities, and lived in them. 24 The Israelites departed from there at that time, every man to his tribe and to his family, and they each went out from there to his own inheritance. 25 In those days there was no king in Israel. Everyone did that which was right in his own eyes.

1 In the days when the judges judged, there was a famine in the land. A certain man of Bethlehem Judah went to live in the country of Moab with his wife and his two sons. 2 The name of the man was Elimelech, and the name of his wife Naomi. The names of his two sons were Mahlon and Chilion, Ephrathites of Bethlehem Judah. They came into the country of Moab and lived there.

3 Elimelech, Naomi’s husband, died, and she was left with her two sons. 4 They took for themselves wives from the women of Moab. The name of the one was Orpah, and the name of the other was Ruth. They lived there about ten years. 5 Mahlon and Chilion both died, and the woman was bereaved of her two children and of her husband.

8 Naomi said to her two daughters-in-law, “Go, return each of you to her mother’s house. May the Lord deal kindly with you, as you have dealt with the dead and with me. 9 May the Lord grant that you may find rest, each of you in the house of her husband.”

Then she kissed them, and they raised their voices and wept. 10 They said to her, “No, but we will return with you to your people.”

11 Naomi said, “Go back, my daughters. Why do you want to go with me? Do I still have sons in my womb, that they may be your husbands? 12 Go back, my daughters, go your way; for I am too old to have a husband. If I should say, ‘I have hope,’ if I should even have a husband tonight, and should also bear sons, 13 would you then wait until they were grown? Would you then refrain from having husbands? No, my daughters, for it grieves me much for your sakes, for the Lord’s hand has gone out against me.”

14 They raised their voices and wept again. Then Orpah kissed her mother-in-law, but Ruth clung to her. 15 She said, “Your sister-in-law has gone back to her people and to her god. Follow your sister-in-law.”

16 Ruth said, “Don’t urge me to leave you, and to return from following you, for where you go, I will go; and where you stay, I will stay. Your people will be my people, and your God my God. 17 Where you die, I will die, and there I will be buried. May the Lord do so to me, and more also, if anything but death separates you and me.”

18 When Naomi saw that she was determined to go with her, she stopped urging her.

Naomi and Ruth Return to Bethlehem

19 So they both went until they came to Bethlehem. When they had come to Bethlehem, the whole  city was excited about them, and they asked, “Is this Naomi?”

22 So Naomi returned, and Ruth the Moabitess, her daughter-in-law with her, who returned from the country of Moab. They came to Bethlehem in the beginning of barley harvest.

9 The Samaritan woman therefore said to him, “How is it that you, being a Jew, ask for a drink from me, a Samaritan woman?” (For Jews have no dealings with Samaritans.)

10 Jesus answered her, “If you knew the gift of God, and who it is who says to you, ‘Give me a drink,’ you would have asked him, and he would have given you living water.”

11 The woman said to him, “Sir, you have nothing to draw with, and the well is deep. So where do you get that living water? 12 Are you greater than our father, Jacob, who gave us the well and drank from it himself, as did his children and his livestock?”

15 The woman said to him, “Sir, give me this water, so that I don’t get thirsty or have to come all the way here to draw.”

19 The woman said to him, “Sir, I perceive that you are a prophet.

20 Our fathers worshiped on this mountain, and you Jews say that in Jerusalem is the place where people ought to worship. 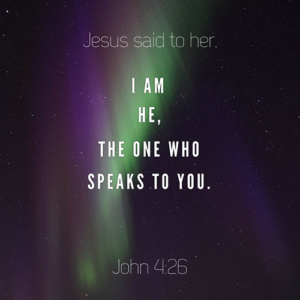 21 Jesus said to her, “Woman, believe me, the hour is coming when neither on this mountain, nor in Jerusalem, will you worship the Father. 22  You worship that which you do not know. We worship that which we know; for salvation is from the Jews. 23  But the hour is coming, and is now here, when the true worshipers will worship the Father in spirit and truth, for the Father seeks such to be his worshipers. 24 God is spirit, and those who worship him must worship in spirit and truth.”

25 The woman said to him, “I know that the Messiah is coming (he who is called Christ). When he comes, he will explain everything to us.”

The Disciples Return and Marvel

27 At this, his disciples came. They marveled that he was speaking with a woman; yet no one said, “What are you looking for?” or, “Why are you speaking with her?” 28 So the woman left her water pot, went away into the city, and said to the people, 29 “Come, see a man who told me everything that I did. Can this be the Messiah?”

30 They went out of the city, and were coming to him. 31 In the meantime, the disciples urged him, saying, “Rabbi, eat.”

33 The disciples therefore said to one another, “Has anyone brought him something to eat?”

34 Jesus said to them, “My food is to do the will of him who sent me and to accomplish his work. 35  Do you not say, ‘There are yet four months until the harvest?’ I tell you, lift up your eyes and see the fields, that they are white for harvest already. 36  He who reaps receives wages and gathers fruit to eternal life; that both he who sows and he who reaps may rejoice together. 37  For in this the saying is true, ‘One sows, and another reaps.’ 38  I sent you to reap that for which you have not labored. Others have labored, and you have entered into their labor.”

39 From that city many of the Samaritans believed in him because of the word of the woman, who testified, “He told me everything that I did.” 40 So when the Samaritans came to him, they begged him to stay with them. He stayed there two days. 41 Many more believed because of his word. 42 They said to the woman, “Now we believe, not because of your speaking; for we have heard for ourselves, and know that this is indeed the Messiah, the Savior of the world.”

1 Give thanks to the Lord! Call on his name!
Make his deeds known among the peoples.

2 Sing to him, sing praises to him!
Tell of all his marvelous works.

3 Glory in his holy name.
Let the heart of those who seek the Lord rejoice.

4 Seek the Lord and his strength.
Seek his face forevermore.

5 Remember his marvelous works that he has done:
his wonders, and the judgments of his mouth,
6 you offspring of Abraham, his servant,
you children of Jacob, his chosen ones.

7 He is the Lord, our God.
His judgments are in all the earth.

8 He has remembered his covenant forever,
the word which he commanded to a thousand generations,
9 the covenant which he made with Abraham,
his oath to Isaac,
10 and confirmed it to Jacob for a statute;
to Israel for an everlasting covenant,
11 saying, “To you I will give the land of Canaan,
the lot of your inheritance,”
12 when they were but a few men in number,
yes, very few, and foreigners in it.

13 They went about from nation to nation,
from one kingdom to another people.

14 He allowed no one to do them wrong.
Yes, he reproved kings for their sakes,

15 “Do not touch my anointed ones!
Do my prophets no harm!”

25 A truthful witness saves souls,
but a false witness is deceitful.