His offspring will be mighty in the land.  The generation of the upright will be blessed. Psalm 112:2

1 In the tenth year, in the tenth month, on the twelfth day of the month, the word of the Lord came to me, saying,

2 “Son of man, set your face against Pharaoh king of Egypt, and prophesy against him and against all Egypt. 3 Speak and say, ‘The Lord God says:

6 “ ‘ “All the inhabitants of Egypt will know that I am the Lord, because they have been a mere staff of reed to the Israelites. 7 When they took hold of you by your hand, you broke, and tore their shoulders. When they leaned on you, you broke, and weakened their backs.”

The Desolation of Egypt

8 “ ‘Therefore the Lord God says: “I will bring a sword on you, and will cut off from you, man and beast. 9 The land of Egypt will be a desolate waste. Then they will know that I am the Lord.

“ ‘ “Because he has said, ‘The river is mine, and I have made it;’ 10 therefore, I am against you, and against your rivers. I will make the land of Egypt an utter waste and desolation, from the tower of Seveneh to the border of Ethiopia. 11 No foot of man or beast will pass through it. It will be uninhabited for 40 years.

12 I will make the land of Egypt a desolation among desolate countries. Her cities among the cities that are laid waste will be a desolation for 40 years. I will scatter the Egyptians among the nations, and will disperse them throughout the countries.”

13 “ ‘For the Lord God says: “At the end of 40 years I will gather the Egyptians from the nations where they were scattered. 14 I will reverse the captivity of Egypt, and will cause them to return to the land of Pathros, into the land of their birth. They will be a lowly kingdom there.

Egypt the Reward of Nebuchadnezzar

17 It came to pass in the 27th year, in the first month, on the first day of the month, the word of the Lord came to me, saying,

18 “Son of man, Nebuchadnezzar, king of Babylon made his army serve so arduously against Tyre that every head was made bald, and every shoulder was worn; yet he received no wages from Tyre, nor did his army, for the service that he had expended against it. 19

Therefore the Lord God says: ‘I will give the land of Egypt to Nebuchadnezzar king of Babylon. He will carry off her wealth, and take her plunder and her prey. That will be the wages for his army. 20 I have given him the land of Egypt as his payment for which he served, because they worked for me,’ says the Lord God.

21 “In that day I will cause a horn to sprout for the Israelites, and I will open your mouth among them. Then they will know that I am the Lord.”

A Lament for Egypt

1 The word of the Lord came to me again, saying,

4 A sword will come on Egypt,
and anguish will be in Ethiopia,
when the slain fall in Egypt,
when her wealth is taken away,
and her foundations are broken down.
5 “ ‘ “Ethiopia, Put, Lud, all the mixed races, Cub, and the people of the land that is allied with them, will fall by the sword with them.”

“They also who uphold Egypt will fall.
The pride of her power will come down.
They will fall by the sword in it from the tower of Seveneh,”

7 “They will be desolate in the midst of the desolate countries.
Her cities will be among the cities that are laid waste.
8 They will know that I am the Lord
when I have set a fire in Egypt,
and all her allies are destroyed.
9 “ ‘ “On that day messengers will go out from me in ships to make the careless Ethiopians afraid. They will be in anguish, like in the days of Egypt; for it is coming.”

“I will also put an end to the wealth of Egypt,
at the hand of Nebuchadnezzar king of Babylon.
11 He and his people with him,
the terror of the nations,
will be brought in to destroy the land.
They will draw their swords against Egypt,
and fill the land with the slain.
12 I will make the rivers dry,
and will sell the land into the hands of evil men.
I will make the land desolate,
and all that is in it,
at the hand of strangers:
I, the Lord, have spoken it.”

14 I will make Pathros desolate,
and will set a fire in Zoan,
and will execute judgments on Thebes.
15 I will pour my wrath on Pelusium,
the stronghold of Egypt.
I will destroy wealth of Thebes.
16 I will set a fire in Egypt
Pelusium will be in great anguish.
Thebes will be breached.
Memphis will have adversaries in the daytime.

17 The young men of Aven and of Pibeseth will fall by the sword.
They will go into captivity.
18 At Tehaphnehes also the day will withdraw itself,
when I break the yokes of Egypt there.
The pride of her power will cease.
As for her, a cloud will cover her,
and her daughters will go into captivity.
19 Thus I will execute judgments on Egypt.
Then they will know that I am the Lord.” ’ ”

The Broken Arms of Pharaoh

20 In the eleventh year, in the first month, on the seventh day of the month, the word of the Lord came to me, saying,

21 “Son of man, I have broken the arm of Pharaoh king of Egypt. It has not been bound up with medicine or bandages, so that it could gain the strength to hold a sword.

‘I am against Pharaoh king of Egypt, and will break his arms, the strong arm that was broken. I will cause the sword to fall out of his hand. 23 I will scatter the Egyptians among the nations, and will disperse them throughout the countries.

26 I will scatter the Egyptians among the nations, and disperse them through the countries. Then they will know that I am the Lord.’ ”

1 Therefore let us also, seeing that we are surrounded by so great a cloud of witnesses, lay aside every weight and the sin which so easily entangles us, and let us run with perseverance the race that is set before us, 2 looking to Jesus, the author and perfecter of our faith, who for the joy that was set before him endured the cross, despising its shame, and has sat down at the right hand of the throne of God. 3 For consider him who has endured such hostility from sinners, that you do not grow weary and lose heart.

4 You have not yet resisted sin to the point of bloodshed in your striving against sin. 5 You have forgotten the exhortation which reasons with you as with children,

“My son, do not take lightly the chastening of the Lord,
nor faint when you are reproved by him;
6 for whom the Lord loves, he disciplines,
and chastises every son whom he receives.”

7 It is for discipline that you endure. God deals with you as with children, for what son is there whom his father does not discipline? 8 But if you are without discipline, of which all have been made partakers, then you are illegitimate, and not children. 9 Furthermore, our earthly fathers chastened us, and we paid them respect. Shall we not much rather be in subjection to the Father of spirits, and live?

10 For our earthly fathers indeed, for a few days, punished us as seemed good to them; but he disciplines us for our profit, that we may be partakers of his holiness. 11 All chastening seems to be, at the time, not joyous but grievous; yet afterward it yields the peaceful fruit of righteousness to those who have been trained by it.

12 Therefore lift up hands that hang down and knees that are feeble,  13 and make straight paths for your feet, so what is lame may not be dislocated, but rather be healed. 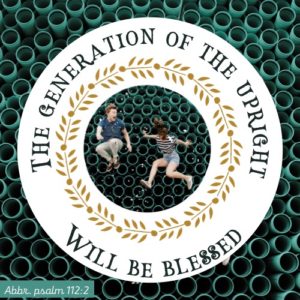 Blessed is He who Fears the Lord

1 Hallelujah!
Blessed is the man who fears the Lord,
who delights greatly in his commandments.
2 His offspring will be mighty in the land.
The generation of the upright will be blessed.
3 Wealth and riches are in his house.
His righteousness endures forever.
4 Light dawns in the darkness for the upright,
gracious, merciful, and righteous.

5 It goes well for the man who deals graciously and lends,
who conducts his business justly.
6 For he will never be shaken.
The righteous will be remembered forever.
7 He will not be afraid of bad news.
His heart is steadfast, trusting in the Lord.
8 His heart is settled, and he will not be afraid
when he looks on his adversaries triumphantly.
9 He disperses freely, giving to the poor.
His righteousness endures forever.
His horn will be exalted with honor.

17 Iron sharpens iron;
so a man sharpens his friend’s countenance.