The sound of rejoicing and salvation is in the tents of the righteous. The right hand of God performs valiantly. Psalm 118:15

The Slaughter of Gog’s Armies

1 “You, son of man, prophesy against Gog, and say, ‘The Lord God says: “I am against you, Gog, prince of Rosh, Meshech, and Tubal. 2 I will turn you around and will lead you on and will bring you up from the uttermost parts of the north, bringing you against the mountains of Israel.

3 I will strike the bow from your left hand, and will make the arrows fall from your right hand. 4 You will fall on the mountains of Israel, you, and all your troops, and the peoples who are with you. I will give you over to the ravenous birds of every kind and to the animals of the field to be devoured. 5 You will fall on the open field, for I have spoken it,” says the Lord God. 6 “I will send fire on Magog and on those who dwell securely in the islands. Then they will know that I am the Lord.

7 “ ‘ “I will make my holy name known among my people Israel. I will not allow my holy name to be profaned any more. Then the nations will know that I am the Lord, the Holy One in Israel. 8 It is coming, and it will be done,” says the Lord God. “This is the day about which I have spoken.

12 “ ‘ “The house of Israel will be burying them for seven months that they may cleanse the land. 13 Yes, all the people of the land will bury them, and on the day that I am glorified, they will be renowned,” says the Lord God.

14 “ ‘ “They will set apart men for continuous employment, to pass through the land and work with those burying all the remains from the land’s surface, to cleanse it. They will continue searching until seven months have passed.  15 Those employed to pass through the land will pass through it, and when anyone sees a man’s bone, then he will set up a sign by it until the undertakers have buried it in the valley of Hamon Gog. 16 Hamonah will also be the name of a city. Thus they will cleanse the land.” ’

17 “You, son of man, the Lord God says: ‘Speak to the birds of every kind, and to every animal of the field, “Assemble yourselves and come, gather from every side to my sacrifice that I am preparing for you, a great sacrifice on the mountains of Israel that you may eat meat and drink blood. 18 You shall eat the flesh of the mighty, and drink the blood of the princes of the earth, of rams, of lambs, and of goats, of bulls, all of the fattened animals of Bashan. 19 You shall eat fat until you are full and drink blood until you are drunk, at the sacrifice which I am preparing for you. 20 You shall be filled at my table, with horses and chariots, with mighty men, and with warriors of every kind,” says the Lord God.’

Israel to Be Restored

21 “I will display my glory among the nations. Then all the nations will see the judgment that I have executed, and the hand that I have laid on them. 22 So the house of Israel will know that I am the Lord their God, from that day forward. 23 The nations will know that the house of Israel went into captivity for their iniquity, because they trespassed against me, and I hid my face from them. So I gave them into the hand of their adversaries, and they all fell by the sword. 24 According to their uncleanness and transgressions, I have dealt with them and hid my face from them.

25 “Therefore the Lord God says: ‘Now I will restore Jacob from captivity, and have mercy on the whole house of Israel. I will be jealous for my holy name. 26 They will bear their shame and all the trespasses by which they sinned against me, when they dwell securely in their land. No one will make them afraid 27 when I have brought them back from the peoples and gathered them out of their enemies’ lands and shown my holiness in the sight of many nations. 28 They will know that I am the Lord their God, who caused them to go into captivity among the nations but gathered them back to their own land, leaving none of them captive there. 29 I will no longer hide my face from them, for I have poured out my Spirit on the house of Israel,’ says the Lord God.”

The Man with a Measuring Rod

1 In the 25th year of our captivity, at the beginning of the year, on the tenth day of the month, in the fourteenth year after the the city was struck, on the same day, the hand of the Lord was on me, and he brought me there.

2 In visions from God he brought me into the land of Israel, and set me down on a very high mountain, on which was something like the structure of a city to the south. 3 He brought me there, and there was a man whose appearance was like bronze, and he stood at the gate with a linen cord and a measuring rod in his hand. 4 The man said to me, “Son of man, look with your eyes and listen with your ears and set your heart on all that I will show you, for you have been brought here so that I might show them to you. Declare to the house of Israel everything that you see.”

10 There were three chambers on each side of the eastern gate. The three of them had the same measurements. The posts had the same measurement on each side.  11 He measured the width of the opening of the gate, fifteen feet; and the length of the gate, twenty feet; 12 and a border in front of the gate chambers, eighteen inches on this side, and a border, eighteen inches on the other side; and the gate chambers, nine feet on this side, and nine feet on the other side.

13 He measured the gate from the roof of the one gate chamber to the roof of the other, a width of 38 feet, door to door. 14 He also made posts, 90 feet; and the court reached to the posts, around the gate. 15 From the forefront of the gate at the entrance to the forefront of the inner porch of the gate were 75 feet. 16 There were closed windows to the gate chambers, and to their posts within the gate all around, and likewise to the arches. Windows were around on the inside. Palm trees were on each post.

17 Then he brought me into the outer court. There were rooms and a pavement made for the court all around. Thirty rooms were on the pavement. 18 The pavement was by the side of the gates, corresponding to the length of the gates, which was the lower pavement. 19 Then he measured the width from the forefront of the lower gate to the forefront of the inner court outside, 150 feet, both on the east and on the north.

20 He measured the length and width of the gate of the outer court which faces toward the north. 21 The little chambers of it were three on one side and three on the other side. Its posts and its arches were the same as the measure of the first gate: its length was 75 feet, and the width 38 feet. 22 Its windows, its arches, and its palm trees were the same as the measure of the gate which faces toward the east. They went up to it by seven steps. Its arches were before them. 23 There was a gate to the inner court facing the other gate, on the north and on the east. He measured 150 feet from gate to gate.

1 Not many of you should be teachers, my brothers, knowing that we will receive heavier judgment. 2 For we all stumble in many ways. If anyone does not stumble in what he says, he is a perfect man, able to bridle the whole body as well.

3 Indeed, we put bits in the mouths of horses so that they will obey us, and we are able to control their whole body. 4 The ships also, though they are so large and are driven by fierce winds, are yet guided by a very small rudder, wherever the captain desires.

5 So the tongue is also a small body part, yet it boasts greatly. Consider how a small fire can spread through a large forest! 6 And the tongue is a fire. The tongue–a world of iniquity among our body parts–defiles the whole body and sets our life’s course on fire by hell itself.

7 For every kind of animal, bird, creeping thing, and sea creature can be and has been tamed by mankind. 8 But nobody can tame the tongue. It is a restless evil, full of deadly poison.

9 With it we bless our God and Father, and with it we curse men, who are made in the image of God. 10 Out of the same mouth comes forth blessing and cursing. My brothers, these things ought not to be so. 11 Does a spring send forth fresh and bitter water from the same opening? 12 Can a fig tree, my brothers, yield olives, or vine figs? Neither can a spring yield both salt water and fresh water.

True Wisdom from Above

13 Who is wise and understanding among you? Let him show it by his good conduct, by deeds done in the wisdom of humility. 14 But if you have bitter jealousy and selfish ambition in your heart, do not boast and lie to hide the truth. 15 This wisdom does not come from above, but is earthly, sensual, and demonic. 16 For where jealousy and selfish ambition are, there will be confusion and every evil practice.

17 But the wisdom that is from above is first pure, then peaceful, gentle, reasonable, full of mercy and good fruits, without partiality, and without hypocrisy. 18 Now the fruit of righteousness is sown in peace by those who are peacemakers.

The Lord is on My Side 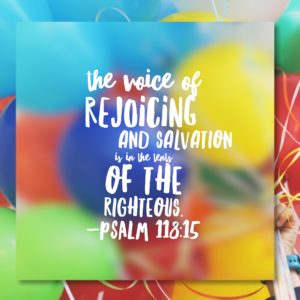 2 In rebellion, a land has many rulers,
but order is maintained by a man of understanding and knowledge.