Draw near to God, and he will draw near to you. Cleanse your hands, you sinners. Purify your hearts, you double-minded. James 4:8

The Gates of the Inner Court

28 Then he brought me to the inner court by the south gate. He measured the south gate according to these measurements; 29 with its gate chambers, its posts, and its arches, according to these measurements. There were windows in it and in its arches all around. It was 75 feet long, and 38 feet wide. 30 There were arches all around, 38 feet long, and seven and a half feet wide. 31 Its arches were toward the outer court. Palm trees were on its posts. The ascent to it had eight steps.

32 He brought me into the inner court toward the east. He measured the gate according to these measurements; 33 with its lodges, its posts, and its arches, according to these measurements. There were windows in it and in its arches all around. It was 75 feet long, and 38 feet wide. 34 Its arches were toward the outer court. Palm trees were on its posts on each side. The ascent to it had eight steps.

35 He brought me to the north gate, and he measured it according to these measurements; 36 its lodges, its posts, and its arches. There were windows in it all around. The length was 75 feet and the width 38 feet. 37 Its posts were toward the outer court. Palm trees were on its posts on each side. The ascent to it had eight steps.

Rooms for the Priests

47 He measured the court, which was square, 150 feet long and 150 feet wide. The altar was before the house.

5 Then he measured the wall of the temple, nine feet thick; and the width of every side room, six feet, all around the temple on every side. 6 The side rooms were in three stories, one over the other, with 30 rooms in each story and they rested in offsets all around the walls that they might be supported, and not penetrate the wall of the temple. 7 The side rooms were wider on the higher levels because the walls were narrower at the higher levels. Therefore the width of the temple increased upward; and so one went up from the lowest level to the highest through the middle level.

12 The building that was before the separate place at the side toward the west was 105 feet wide; and the wall of the building was seven and a half feet thick all around, and its length 135 feet.

15 He measured the length of the building before the separate place which was at its back, and its galleries on each side were 150 feet from the inner temple, and the porches of the court 16 the thresholds, and the closed windows, and the galleries around on their three stories, opposite the threshold, with wood ceilings all around, and from the ground up to the windows, (now the windows were covered), 17 to the space above the door, to the inner house, and outside, and by all the wall all around inside and outside, by measure.

21 As for the temple, the door posts were squared. As for the face of the sanctuary, its appearance was like the appearance of the temple. 22 The altar was wood, four and a half high, and its length three feet. Its corners, its length, and its walls were wood. He said to me, “This is the table that is before the Lord.” 23 The temple and the sanctuary had two doors. 24 The doors had two leaves each, two turning leaves: two for the one door, and two leaves for the other. 25 There were made on them, on the doors of the temple, cherubim and palm trees, like those made on the walls. There was a threshold of wood on the face of the porch outside. 26 There were closed windows and palm trees on the one side and on the other side, on the sides of the porch. This is how the side rooms of the house and the thresholds were arranged.

1 Where do wars and quarrels among you come from? Do they not come from your passions warring within you? 2 You lust and do not have, so you murder and covet and cannot obtain it. You fight and wage war. You do not have, because you do not ask. 3 You ask and do not receive, because you ask with wrong motives, so that you may spend it on your pleasures.

4 You adulterers and adulteresses, do you not know that friendship with the world is hostility toward God? Whoever therefore wants to be a friend of the world makes himself an enemy of God. 5 Or do you think that the Scripture says in vain that the Spirit who lives within us yearns jealously? 6 But he gives more grace. Therefore it says,

Drawing Near to God 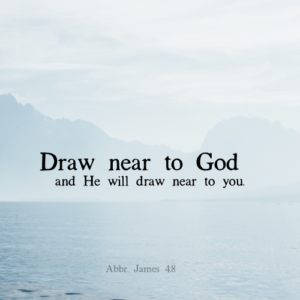 7 Be subject therefore to God. Resist the devil, and he will flee from you. 8 Draw near to God, and he will draw near to you. Cleanse your hands, you sinners. Purify your hearts, you double-minded. 9 Lament, mourn, and weep. Let your laughter be turned to mourning, and your joy to gloom. 10 Humble yourselves in the sight of the Lord, and he will exalt you.

11 Do not speak against one another, brothers. He who speaks against a brother and judges his brother, speaks against the law and judges the law. But if you judge the law, you are not a doer of the law, but a judge. 12 Only one is the lawgiver, who is able to save and to destroy. But who are you to judge another?

Do Not Boast about Tomorrow

13 Come now, you who say, “Today or tomorrow let’s go into this city, and spend a year there, trade, and make a profit.” 14 You do not know what your life will be like tomorrow. For what is your life? For you are a vapor that appears for a little time and then vanishes away. 15 For you ought to say, “If it is the Lord’s will, we will both live and do this or that.” 16 But now you glory in your boasting. All such boasting is evil. 17 To him therefore who knows to do good and does not do it, to him it is sin.

19 Open to me the gates of righteousness.
I will enter into them.
I will give thanks to the Lord.
20 This is the gate of the Lord,
and the righteous will enter into it.
21 I will give thanks to you,
for you have answered me,
and have become my salvation.
22 The stone which the builders rejected
has become the cornerstone.
23 This is the Lord’s doing.
It is marvelous in our eyes.
24 This is the day that the Lord has made.
We will rejoice and be glad in it!

25 Save us now, Lord!
Lord, we ask you, send success now.
26 Blessed is he who comes in the name of the Lord!
We have blessed you from the house of the Lord.
27 The Lord is God, and he has given us light.
Bind the sacrifice with cord, to the horns of the altar.
28 You are my God, and I will give thanks to you.
You are my God, I will exalt you.
29 Oh give thanks to the Lord, for he is good,
for his loving kindness endures forever.

3 A needy man who oppresses the poor
is like a driving rain which leaves no crops.

4 Those who forsake the law praise the wicked,
but those who keep the law contend with them.

5 Evil men do not understand justice,
but those who seek the Lord understand it fully.