Confess your offenses to one another, and pray for one another, that you may be healed. The insistent prayer of a righteous person is powerfully effective. James 5:16

Chambers for the Priests

1 Then he brought me out into the outer court, the way toward the north. Then he brought me into the room that was opposite the separate place, and which was opposite the building toward the north. 2 Before the length of 150 feet was the north door, and the width was 75 feet. 3 Opposite the 30 foot area, which belonged to the inner court, and opposite the pavement which belonged to the outer court, was an arrangement of gallery on top of gallery to the third floor. 4 Before the rooms was a walkway of fifteen feet wide at distance of eighteen inches; and their entrances faced north.

5 Now the upper rooms were narrower because the galleries took up space, from the lower and the middle part of the the building. 6 For they were in three stories, and they did not have pillars like the court pillars. Therefore the uppermost was set back from the ground more than the lowest and the middle stories. 7 The wall that was outside by the side of the rooms, toward the outer court in front of the rooms, was 75 feet long. 8 For the length of the rooms that were in the outer court was 75 feet, and those facing the temple were 150 feet. 9 From under these rooms was the entry on the east side, as one goes into them from the outer court.

10 In the thickness of the wall of the court that faced east, opposite the separate place, and opposite the building, there were rooms. 11 The walkway in front of them looked like the rooms which faced north. Their length and width was the same as the others, and all their exits and entrances were done in the same fashion. 12 According to the doors of the rooms that were toward the south was a door at the head of the walkway, the way directly before the wall toward the east, as one enters into them.

13 Then he said to me, “The north rooms and the south rooms, which are in front of the separate place, are the holy rooms, where the priests who are near to the Lord shall eat the most holy things. There they shall lay the most holy things, with the grain offering, the sin offering, and the trespass offering; for the place is holy. 14 When the priests enter in, then they shall not go out of the holy place into the outer court, but they shall lay their garments in which they minister there; for they are holy. Then they shall put on other garments, and shall approach that which is for the people.”

The Glory of the Lord Returns to the Temple

6 I heard one speaking to me from the house; and a man stood by me. 7 He said to me, “Son of man, this is the place of my throne, and the place of the soles of my feet, where I will dwell among the Israelites forever. The house of Israel will no longer defile my holy name, neither they, nor their kings, by their prostitution, and by the dead bodies of their kings in their high places, 8 in their setting of their threshold by my threshold and their door post beside my door post. There was a wall between me and them, and they have defiled my holy name by the abominations which they have committed. Therefore I have consumed them in my anger. 9 Now let them put away their prostitution and the dead bodies of their kings, far from me. Then I will dwell among them forever.

The Altar of Sacrifice

18 He said to me, “Son of man, the Lord God says: ‘These are the ordinances of the altar in the day when they make it, to offer burnt offerings on it, and to sprinkle blood on it. 19 You shall give to the Levitical priests who are of the offspring of Zadok, who are near to me, to minister to me,’ says the Lord God, ‘a young bull for a sin offering. 20 You shall take of its blood, and put it on its four horns, and on the four corners of the ledge, and on the border all around. You shall cleanse it and make atonement for it that way. 21 You shall also take the bull of the sin offering, and it shall be burned in the appointed place of the house, outside of the sanctuary.

25 “Seven days you shall prepare every day a goat for a sin offering. They shall also prepare a young bull, and a ram out of the flock, without defect. 26 Seven days shall they make atonement for the altar and purify it. So shall they consecrate it. 27 When they have accomplished the days, it shall be that on the eighth day, and forward, the priests shall make your burnt offerings on the altar, and your peace offerings. Then I will accept you,’ says the Lord God.”

1 Come now, you rich, weep and howl for the miseries coming to you. 2 Your riches are corrupted and your garments are moth-eaten. 3 Your gold and your silver are corroded, and their corrosion will be a testimony against you, eating your flesh like fire. You have laid up your treasure in the last days.

4 The wages of the laborers who mowed your fields, which you have fraudulently withheld, cry out, and the cries of those who reaped have entered into the ears of the Lord of Hosts. 5 You have lived in luxury on the earth, and enjoyed your pleasures. You have nourished your hearts in the day of slaughter. 6 You have condemned and murdered the righteous, though he does not resist you.

9 Do not complain about one another, brothers, so that you will not be judged. For the judge is standing at the door.

10 Let the suffering and perseverance of the prophets who spoke in the name of the Lord be your example. 11 We call them blessed, those who endured. You have heard of the perseverance of Job, and have seen the Lord in the outcome, and how the Lord is full of compassion and mercy.

The Prayer of Faith 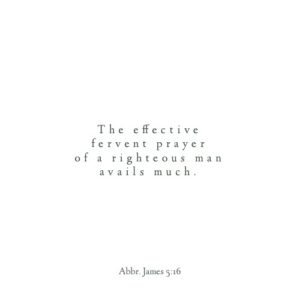 13 Is any among you suffering? Let him pray. Is any cheerful? Let him sing praises. 14 Is any among you sick? Let him call for the elders of the assembly, and let them pray over him, anointing him with oil in the name of the Lord, 15 and the prayer of faith will heal him who is sick, and the Lord will raise him up. If he has committed sins, he will be forgiven.

16 Confess your offenses to one another, and pray for one another, that you may be healed. The insistent prayer of a righteous person is powerfully effective. 17 Elijah was a man with a nature like ours, and he prayed earnestly that it might not rain, and it did not rain on the earth for three years and six months. 18 He prayed again, and the sky gave rain, and the earth produced its fruit.

19 Brothers, if any among you wanders from the truth and someone turns him back, 20 let him know that he who turns a sinner from his errant way will save a soul from death and will cover a multitude of sins.

4 You have commanded your precepts,
that we should fully obey them.
5 Oh that my ways were steadfast
to obey your statutes!
6 Then I would not be disappointed,
when I consider all of your commandments.
7 I will give thanks to you with an upright heart,
when I learn your righteous judgments.
8 I will observe your statutes.
Do not utterly forsake me.

BET
9 How can a young man keep his way pure?
By living according to your word.
10 With my whole heart, I have sought you.
Do not let me wander from your commandments.

11 I have hidden your word in my heart,
that I might not sin against you.
12 Blessed are you, Lord.
Teach me your statutes.
13 With my lips,
I have declared all the ordinances of your mouth.
14 I have rejoiced in the way of your testimonies,
as much as in vast riches.
15 I will meditate on your precepts,
and consider your ways.
16 I will delight myself in your statutes.
I will not forget your word.

6 Better is the poor one who walks in integrity,
than he who is perverse in his ways, and is rich.

7 Whoever keeps the law is a wise son,
but he whoever is a companion of gluttons brings shame to his father.