1 “ ‘This is what the Lord God says: The gate of the inner court that looks toward the east shall be shut for six working days, but on the Sabbath day it shall be opened, and on the day of the new moon it shall be opened. 2 The prince shall enter by the way of the porch of the gate outside and shall stand by the post of the gate, and the priests shall prepare his burnt offering and his peace offerings, and he shall worship at the threshold of the gate. Then he shall go out, but the gate shall not be shut until the evening. 3 The people of the land shall worship at the door of that gate before the Lord on the Sabbaths and on the new moons.

6 On the day of the new moon it shall be a young bull without defect and six lambs and a ram. They shall be without defect. 7 He shall prepare a grain offering, an ephah for the bull, and an ephah for the ram, and for the lambs according to what he is able, and a hin of oil to an ephah. 8 When the prince enters, he shall go in by the way of the porch of the gate, and he shall go out by its way.

11 In the feasts and in the solemnities the grain offering shall be an ephah for a bull and an ephah for a ram and for the lambs as he is able to give and a hin of oil to an ephah.

12 When the prince prepares a free will offering, a burnt offering, or peace offerings as a free will offering to the Lord, someone shall open for him the gate that looks toward the east; and he shall prepare his burnt offering and his peace offerings, as he does on the Sabbath day. Then he shall go out, and after his going out someone shall shut the gate.

Courts for Boiling and Baking

19 Then he brought me through the entry, which was at the side of the gate, into the holy rooms for the priests, which looked toward the north. There was a place on the back part westward. 20 He said to me, “This is the place where the priests shall boil the trespass offering and the sin offering, and where they shall bake the grain offering, that they would not bring them out into the outer court, transmitting holiness to the people.”

21 Then he brought me out into the outer court, and caused me to pass by the four corners of the court, and in every corner of the court there was another court. 22 In the four corners of the court there were courts enclosed, 70 feet long and 52.5 inches wide. These four in the corners were the same size. 23 There was a wall around in them, around the four, and boiling places were made under and around the walls. 24 Then he said to me, “These are the boiling houses, where the ministers of the house shall boil the sacrifice of the people.”

1 Putting away therefore all wickedness, all deceit, hypocrisy, envy, and all evil speaking, 2 as newborn babies, long for the pure milk of the Word, that with it you may grow, 3 if indeed you have tasted that the Lord is gracious: 4 coming to him, a living stone, rejected indeed by men, but chosen by God, precious.

5 You also, as living stones, are built up as a spiritual house, to be a holy priesthood, to offer up spiritual sacrifices, acceptable to God through Jesus Christ. 6 Because it is contained in Scripture,

“I lay in Zion a chief cornerstone, chosen and precious.
He who believes in him will not be put to shame.” a

7 For you who believe therefore is honor, but for those who are disobedient,

“The stone which the builders rejected
has become the chief cornerstone,” b

“A stumbling stone and a rock of offense,” c

for they stumble at the word, being disobedient, to which also they were appointed.

9 But you are a chosen race, a royal priesthood, a holy nation, a people for God’s own possession, that you may proclaim the excellence of him who called you out of darkness into his marvelous light. 10 In the past, you were not a people, but now are God’s people, who had not obtained mercy, but now have obtained mercy.

11 I beg you as foreigners and pilgrims, to abstain from fleshly lusts, which war against the soul; 12 having good behavior among the nations, so in that of which they speak against you as evildoers, they may by your good works, which they see, glorify God in the day of visitation.

13 Therefore subject yourselves to every ordinance of man for the Lord’s sake: whether to the king, as supreme, 14 or to governors, as sent by him for vengeance on evildoers and for praise to those who do well. 15 For this is the will of God, that by doing good you should silence the ignorance of foolish men: 16 as free, and not using your freedom as a cloak of wickedness, but as bondservants of God.

18 Servants, be subject to your masters with all respect: not only to the good and gentle, but also to the wicked. 19 For it is commendable if someone endures pain, suffering unjustly, because of conscience toward God.

22 He committed no sin,
nor was deceit found in his mouth.
23 When he was cursed, he did not curse back.
When he suffered, he did not threaten,
but committed himself to him who judges righteously.
24 He himself bore our sins in his body on the tree,
so that we, having died to sins, might live to righteousness.
You were healed by his wounds. d

25 For you were going astray like sheep, but now you have returned to the Shepherd and Overseer of your souls. 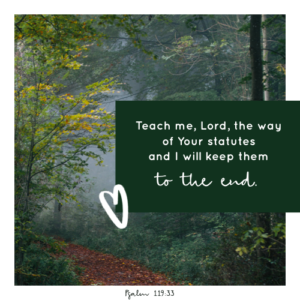 33 Teach me, Lord, the way of your statutes,
and I will keep them to the end.
34 Give me understanding, and I will keep your law.
Yes, I will obey it with my whole heart.
35 Direct me in the path of your commandments,
for I delight in them.
36 Turn my heart toward your statutes,
not toward selfish gain.
37 Turn my eyes away from looking at worthless things.
Revive me in your ways.
38 Fulfill your promise to your servant,
that you may be feared.
39 Take away my disgrace that I dread,
for your ordinances are good.
40 I long for your precepts!
Revive me in your righteousness.

WAW
41 Let your loving kindness also come to me, Lord,
your salvation, according to your word.
42 So I will have an answer for him who reproaches me,
for I trust in your word.
43 Do not snatch the word of truth out of my mouth,
for I put my hope in your ordinances.
44 So I will obey your law continually,
forever and ever.
45 I will walk in liberty,
for I have sought your precepts.
46 I will also speak of your statutes before kings,
and will not be disappointed.
47 I will delight myself in your commandments,
because I love them.
48 I reach out my hands for your commandments which I love.
I will meditate on your statutes.

11 The rich man is wise in his own eyes,
but the poor who has understanding sees through him.