One who works his land will have an abundance of food, but one who chases fantasies will have his fill of poverty. Proverbs 28:19

1 Belshazzar the king gave a great feast for a thousand of his nobles and drank wine before the thousand. 2 Belshazzar, while he tasted the wine, commanded that the golden and silver vessels which Nebuchadnezzar his father had taken out of the temple which was in Jerusalem, be brought to him so that the king and his nobles, his wives and his concubines, might drink from them. 3 Then they brought the golden vessels that were taken from the temple–the house of God–in Jerusalem, and the king and his lords, his wives, and his concubines drank from them. 4 They drank wine and praised the gods of gold and of silver, of bronze, of iron, of wood, and of stone.

The Handwriting on the Wall

5 In the same hour, the fingers of a man’s hand came out and wrote near the lamp stand on the plaster of the wall of the king’s palace. The king saw the part of the hand that wrote. 6 Then the king’s face turned pale, and his thoughts troubled him so that the joints of his hip shook, and his knees knocked.

7 The king cried aloud to bring in the magicians, enchanters, astrologers, and diviners. The king spoke and said to the wise men of Babylon,

“Whoever reads this writing, and shows me its interpretation, shall be clothed with purple and have a chain of gold around his neck and shall be the third ranking ruler in the kingdom.”

8 Then all the king’s wise men came in, but they could not read the writing and could not reveal the interpretation to the king. 9 Then king Belshazzar was greatly troubled, and his face turned pale, and his nobles were perplexed.

10 The queen, hearing the words of the king and his nobles, came into the banquet hall. The queen spoke and said, “O king, live forever. Don’t let your thoughts trouble you, nor let your face turn pale. 11 There is a man in your kingdom, who has the spirit of the holy gods in him. In the days of your father, light and understanding and wisdom, like the wisdom of the gods, were found in him. Your father, king Nebuchadnezzar, made him master of the magicians, enchanters, astrologers, and diviners. 12 For Daniel had a remarkable spirit and had knowledge and understanding. The ability to interpret dreams and solve riddles and difficult problems were found in the same Daniel, whom the king named Belteshazzar. Now let Daniel be called, and he will show the interpretation.”

13 Then Daniel was brought in before the king. The king began to speak and said to Daniel, “Are you that Daniel from the exiles of Judah, whom the king my father brought out of Judah? 14 I have heard of you, that the spirit of the gods is in you and that light, understanding, and extraordinary wisdom are found in you.

17 Then Daniel answered before the king, “Keep your gifts for yourself and give your rewards to another. Nevertheless, I will read the writing to the king and reveal to him the interpretation.

18 You, king, the Most High God gave Nebuchadnezzar your father the kingdom and greatness, glory, and majesty. 19 Because of the greatness that he gave him, all the peoples, nations, and languages trembled and feared before him. He killed whom he wanted to, and he kept alive whom he wanted to. He raised up whom he wanted, and he put down whom he wanted.

20 But when his heart was inflated, and his mind was hardened in pride, he was deposed from his royal throne, and his glory was taken from him. 21 He was driven from mankind, and his mind was like that of the animals, and his dwelling was with the wild donkeys. He was fed with grass like oxen, and his body was wet with the dew of the sky, until he knew that the Most High God rules in the kingdom of men and that he sets up over it whomever he will.

22 You, his son, Belshazzar, have not humbled yourself, though you knew all this, 23 but have exalted yourself against the Lord of heaven, and the vessels of his house were brought before you, and you and your nobles, your wives, and your concubines, have drunk wine from them. You have praised the gods of silver and gold, of bronze, iron, wood, and stone, which do not see or hear or know, and you have not glorified the God in whose hand your life-breath is and in whose hand are all your ways. 24 Then the part of the hand was sent from before him, and this writing was inscribed.

25 This is the writing that was inscribed:

26 This is the interpretation of it:

MENE: God has counted your kingdom and brought it to an end.

27 TEKEL: you are weighed in the balances and are found wanting.

28 PERES: your kingdom is divided and given to the Medes and Persians.”

29 Then Belshazzar gave the command, and they clothed Daniel with purple, and put a chain of gold around his neck, and made proclamation concerning him that he should be the third ranking ruler in the kingdom.

30 That night Belshazzar the Chaldean King was slain. 31 Darius the Mede, at about 62 years old, received the kingdom.

1 But false prophets arose among the people, just as false teachers will also be among you, who will secretly bring in destructive heresies, denying the Master who bought them and bringing swift destruction to them. 2 Many will follow their immoral ways, and as a result, the way of the truth will be slandered. 3 And in their greed, through fictitious stories, they will use you for their own profit, but their condemnation began long ago, and their destruction will not slumber.

4 For if God did not spare angels when they sinned, but cast them down to hell, and committed them to pits of darkness to be reserved for judgment; 5 and if God did not spare the ancient world but preserved Noah with seven others, a preacher of righteousness, when He brought a flood on the world of the ungodly; 6 and turning the cities of Sodom and Gomorrah into ashes, condemned them to destruction, having made them an example to those who would live in an ungodly way, 7 but delivered righteous Lot, who was greatly distressed by the lustful life of the wicked 8 (for that righteous man dwelling among them was tormented in his righteous soul from day to day from witnessing and hearing about their lawless deeds); 9 the Lord knows how to deliver the godly from temptation and to keep the unrighteous under punishment for the day of judgment, 10 especially those who walk in the flesh and its lustful defilement and disrepect of authority. Daring, self-willed, they are not afraid to slander the glorious ones.

11 Angels, however, though greater in might and power, do not bring before the Lord, a slanderous complaint against them. 12 But these people, like animals incapable of reasoning, creatures of instinct to be taken and destroyed, speaking blasphemes in matters in which they are ignorant, will in their destroying surely be destroyed. 13 They will receive their due reward for their unrighteousness, these people who find pleasure in reveling in broad daylight. They are flawed defects, reveling in their deceit while they feast with you, 14 having eyes full of adultery, who cannot stop sinning, enticing unstable people, having a heart trained in greed, accursed children; 15 forsaking the right way. They went astray, having followed the way of Balaam the son of Beor, who loved the wages from misdeeds, 16 but he was rebuked for his own disobedience. A mute donkey spoke with a man’s voice and stopped the madness of the prophet.

17 These are wells without water, clouds driven by a storm, for whom the blackness of darkness has been reserved forever. 18 For, uttering inflated words of emptiness, they entice in the lusts of the flesh, by licentiousness, those who are barely escaping from those who live in error, 19 promising them freedom, while they themselves are the slaves of corruption; for a man is a slave to whatever overpowers him.

20 For if, after they have escaped from the world’s corruption through the knowledge of the Lord and Savior Jesus Christ, they are once again entangled in it and overcome by it, the last state will be worse for them than the first. 21 For it would be better for them not to have known the way of righteousness, than after knowing it, to turn back from the holy commandment delivered to them. 22 But this has happened to them according to the true proverb, “The dog returns to his own vomit,” a and “the swine that has been washed to wallowing in the slime.”

SAMEKH
113 I hate double-minded men,
but I love your law.
114 You are my hiding place and my shield.
I hope in your word.
115 Depart from me, you evildoers,
that I may keep the commandments of my God.
116 Uphold me according to your word, that I may live.
Let me not be ashamed of my hope.
117 Hold me up, and I will be safe,
and will have respect for your statutes continually.
118 You reject all those who stray from your statutes,
for their deceit is in vain.
119 You put away all the wicked of the earth like dross.
Therefore I love your testimonies.
120 My flesh trembles for fear of you.
I am afraid of your judgments.

AYIN
121 I have done what is just and righteous.
Do not leave me to my oppressors.
122 Ensure your servant’s well-being.
Do not let the proud oppress me.
123 My eyes fail looking for your salvation,
for your righteous word.
124 Deal with your servant according to your loving kindness.
Teach me your statutes.
125 I am your servant. Give me understanding,
that I may know your testimonies.
126 It is time to act, Lord,
for they are breaking your law.
127 Therefore I love your commandments more than gold,
yes, more than pure gold.
128 Therefore I consider all of your precepts to be right.
I hate every false way. 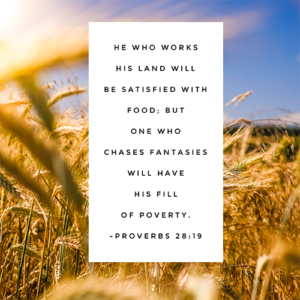 19 One who works his land will be satisfied with food,
but one who chases fantasies will have his fill of poverty.

20 A faithful man is rich with blessings,
but one who is eager to be rich will not go unpunished.