“For this is the covenant that I will make with the house of Israel:
After those days,” says the Lord,
“I will put my laws into their mind,
I will also write them on their hearts.
I will be their God,
and they will be my people.” Hebrews 8:10

The Parable of Two Eagles and a Vine

1 The word of the Lord came to me, saying, 2 “Son of man, present a riddle, and tell a parable to the house of Israel, 3 and say, ‘The Lord God says:

“A great eagle with great wings
and long pinions,
full of feathers of various colors,
came to Lebanon,
and took the top of the cedar.
4 He cropped off the topmost of its young twigs,
and carried it to a land of trading.
He planted it in a city of merchants.
5 “ ‘ “He took some of the seed of the land,
and planted it in fruitful soil.
He set it like a willow tree,
beside abundant waters.
6 It grew, and became a spreading vine
of low stature, whose branches turned toward him,
but its roots remained underneath him.
So it became a vine and produced branches,
and shot out sprigs.

7 “ ‘ “There was also another great eagle
with great wings and many feathers.
This vine bent its roots toward him,
and shot out its branches toward him,
from the beds of its plantation,
so that he might water it.
8 It was planted in good soil near abundant water,
that it might produce branches,
and that it might bear fruit,
that it might be a good vine.” ’

“Will it prosper?
Will he not pull up its roots, and cut off its fruit,
that it may wither,
that all its fresh springing leaves may wither?
It cannot be raised from its roots
by a strong arm or many people.
10 Yes, being planted, will it prosper?
Will it not utterly wither
when the east wind touches it?
It will wither in the beds where it grew.” ’ ”

11 Moreover the word of the Lord came to me, saying, 12 “Say now to the rebellious house, ‘Do you not know what these things mean?’

Tell them, ‘The king of Babylon came to Jerusalem and took its king and its princes and brought them to him to Babylon. 13 He took one of the royal offspring and made a covenant with him. He also brought him under an oath. He removed the leaders of the land, 14 that this kingdom might remain humble, that it might not exalt itself, but that by keeping his covenant it might stand. 15 But he rebelled against him in sending his ambassadors into Egypt, that they might give him horses and many people. Will he prosper? Will he who does such things escape? Will he break the covenant and still escape?

16 “ ‘As I live,’ says the Lord God, ‘surely in the place where the king dwells, who made him king, whose oath he despised, and whose covenant he broke, with him in the midst of Babylon he will die. 17 Pharaoh with his mighty army and great company will not help him in the war when they cast up mounds and build forts, to cut off many people. 18 For he has despised the oath by breaking the covenant, with him in the midst of Babylon he shall die.

19 “Therefore the Lord God says: ‘As I live, I will surely bring on his own head my oath that he has despised and my covenant that he has broken. 20 I will spread my net over him, and he will be taken in my snare. I will bring him to Babylon and will enter into judgment with him there for the trespasses that he has committed against me. 21 All his fugitives in all his bands will fall by the sword, and those who remain will be scattered to every wind. Then you will know that I, the Lord, have spoken it.’

‘I will also take a twig from the lofty top of the cedar,
and will plant it.
I will crop off from the topmost of its young twigs a tender one,
and I will plant it on a high and lofty mountain.
23 I will plant it in the mountain of the height of Israel,
and it will produce boughs, and bear fruit,
and will be a good cedar.
Birds of every kind will dwell in the shade of its branches.
24 All the trees of the field will know
that I, the Lord, have brought down the high tree,
have exalted the low tree,
have dried up the green tree,
and have made the dry tree flourish.
“ ‘I, the Lord, have spoken and have done it.’ ”

1 Now in the things which we are saying, the main point is this: We have such a high priest, who sat down on the right hand of the throne of the Majesty in the heavens, 2 a servant of the sanctuary, and of the true tabernacle, which the Lord set up, not man. 3 For every high priest is appointed to offer both gifts and sacrifices. Therefore it is necessary that this high priest also have something to offer.

4 Now if he were on earth, he would not be a priest at all, since there are priests who offer the gifts according to the law. 5 They serve as a copy and shadow of the heavenly things, just as Moses was warned by God when he was about to make the tabernacle, for he said,

“See to it that you make everything according to the pattern that was shown to you on the mountain.” a

6 But now he has obtained a more excellent ministry, by so much as he is also the mediator of a better covenant, which on better promises has been given as law.

7 For if that first covenant had been faultless, then no place would have been sought for a second. 8 For finding fault with them, he said,

“The days are coming”, says the Lord,
“when I will make a new covenant
with the house of Israel and with the house of Judah,
9 not according to the covenant that I made with their fathers
on the day that I took them by the hand
to lead them out of the land of Egypt,
for they did not continue in my covenant,
and I disregarded them,” says the Lord. 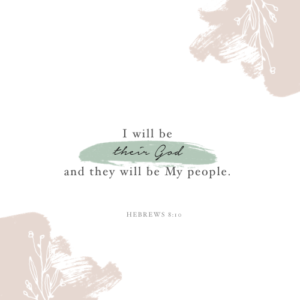 10 “For this is the covenant that I will make with the house of Israel:
After those days,” says the Lord,
“I will put my laws into their mind,
I will also write them on their hearts.
I will be their God,
and they will be my people.

11 They will not teach every man his fellow citizen,
and every man his brother, saying, ‘Know the Lord,’
for all will know me,
from their least to their greatest.

12 For I will be merciful to their unrighteousness.
I will remember their sins and lawless deeds no more.” b

13 In that he speaks of a “new covenant” he has made the first one obsolete, and that which is growing aged and becoming obsolete will soon disappear.

13 They will soon forgot his works.
They did not wait for his counsel,
14 but gave in to craving in the desert,
and tested God in the dessert.
15 So he gave them their request,
but sent leanness into their soul.

16 They envied Moses also in the camp,
and Aaron, the saint of the Lord.
17 The earth opened and swallowed up Dathan,
and covered the assembly of Abiram.
18 A fire was kindled in their assembly.
The flame burned up the wicked.

19 They made a calf in Horeb,
and worshiped a molten image.
20 Thus they exchanged their glory
for an image of a bull that eats grass.
21 They forgot the Lord, their Savior,
who had done great things in Egypt,
22 wondrous works in the land of Ham,
and awesome things by the Red Sea.
23 Therefore he said that he would destroy them,
had Moses, his chosen, not stood before him in the gap,
to turn away his wrath, so that he would not destroy them.

28 They joined themselves also to Baal Peor,
and ate the sacrifices of the dead.
29 Thus they provoked him to anger with their deeds.
The plague broke in on them.
30 Then Phinehas stood up and executed judgment,
so the plague was stopped.
31 That was credited to him as righteousness,
for all generations to come.

32 They angered him also at the waters of Meribah,
so that Moses was troubled on their behalf.
33 Because they were rebellious against His Spirit,
Moses spoke rashly with his lips.
34 They did not destroy the peoples,
as the Lord commanded them,
35 but mixed themselves with other nations,
and learned their ways.
36 They served their idols,
which became a snare to them.
37 Yes, they sacrificed their sons and their daughters to demons.
38 They shed innocent blood,
even the blood of their sons and of their daughters,
whom they sacrificed to the idols of Canaan.
The land was polluted with blood.
39 Thus they were defiled with their works,
and prostituted themselves in their deeds.

40 Therefore the Lord burned with anger against his people.
He abhorred his inheritance.
41 He gave them into the hand of the nations.
Those who hated them ruled over them.
42 Their enemies also oppressed them.
They were brought into submission under their hand.
43 He rescued them many times,
but they were rebellious in their counsel,
and were brought low in their iniquity.

44 Nevertheless he regarded their distress,
when he heard their cry.
45 He remembered his covenant with them,
and relented according to the abundance of his loving kindnesses.
46 He made them also to be pitied
by all those who took them captive.

47 Save us, Lord, our God,
gather us from among the nations,
to give thanks to your holy name,
to triumph in your praise!

48 Blessed be the Lord, the God of Israel,
from everlasting even to everlasting!
Let all the people say, “Amen.”

7 A full soul loathes a honeycomb,
but to a hungry soul, every bitter thing is sweet.

9 Perfume and incense bring joy to the heart,
so does earnest counsel from a man’s friend.