1 In the fourth year of Jehoiakim the son of Josiah, king of Judah, this word came to Jeremiah from the Lord, saying, 2 “Take a scroll of a book, and write in it all the words that I have spoken to you against Israel, and against Judah, and against all the nations, from the day I spoke to you, from the days of Josiah to this day. 3 It may be that the house of Judah will hear all the disaster which I intend to do to them, that they may each return from his evil way, that I may forgive their iniquity and their sin.”

4 Then Jeremiah called Baruch the son of Neriah; and Baruch wrote from the mouth of Jeremiah all God’s words, which he had spoken to him, on a scroll of a book. 5 Jeremiah commanded Baruch, saying, “I am restricted. I cannot go into the house of the Lord. 6 Therefore you go, and read from the scroll which you have written from my mouth, the words of the Lord, in the ears of the people in the house of the Lord on the fast day. Also you shall read them in the ears of all Judah who come out of their cities.

7 It may be they will present their supplication before the Lord, and will each return from his evil way, for the Lord has pronounced great anger and wrath against this people.”

8 Baruch the son of Neriah did according to all that Jeremiah the prophet commanded him, reading in the book the words of the Lord in the house of the Lord.

9 Now in the fifth year of Jehoiakim the son of Josiah, king of Judah, in the ninth month, all the people in Jerusalem, and all the people who came from the cities of Judah to Jerusalem, proclaimed a day of fasting before the Lord. 10 Then Baruch read the words of Jeremiah from the book in the house of the Lord, in the room of Gemariah the son of Shaphan, the scribe, in the upper court, at the entry of the new gate of the house of the Lord, in the ears of all the people.

14 Therefore all the leaders sent Jehudi the son of Nethaniah, the son of Shelemiah, the son of Cushi, to Baruch, saying, “Take in your hand the scroll in which you have read in the ears of the people, and come.”

16 Now when they had heard all the words, they turned to one another in fear and said to Baruch, “We will surely tell the king of all these words.” 17 They asked Baruch, saying, “Tell us now, how did you write all these words from his mouth?”

20 They went in to the king into the court, but they had laid up the scroll in the room of Elishama the scribe. Then they reported all the words in the hearing of the king.

26 The king commanded Jerahmeel the king’s son, and Seraiah the son of Azriel, and Shelemiah the son of Abdeel, to arrest Baruch the scribe and Jeremiah the prophet, but the Lord hid them.

27 Then the word of the Lord came to Jeremiah, after the king had burned the scroll, and the words which Baruch had written from the mouth of Jeremiah, saying, 28 “Take again another scroll, and write in it all the former words that were in the first scroll, which Jehoiakim the king of Judah has burned.

29 Concerning Jehoiakim king of Judah you shall say, ‘The Lord says, “You have burned this scroll, saying, “Why have you written in it, saying, ‘The king of Babylon will certainly come and destroy this land, and will cause to cease from there man and animal?’ ” ’

30 Therefore the Lord says concerning Jehoiakim king of Judah: “He will have no one to sit on the throne of David. His dead body will be cast out in the day to the heat, and in the night to the frost. 31 I will punish him, his offspring, and his servants for their iniquity. I will bring on them, on the inhabitants of Jerusalem, and on the men of Judah, all the evil that I have pronounced against them, but they did not listen.” ’ ”

32 Then Jeremiah took another scroll, and gave it to Baruch the scribe, the son of Neriah, who wrote in it from the mouth of Jeremiah all the words of the book which Jehoiakim king of Judah had burned in the fire, and many similar words were added to them.

1 Do not rebuke an older man, but exhort him as a father, the younger men as brothers, 2 the elder women as mothers; the younger as sisters, in all purity.

3 Honor widows who are truly widows. 4 But if any widow has children or grandchildren, let them learn first to show piety toward their own family and to repay their parents, for this is acceptable in the sight of God.

5 Now she who is truly a widow, and is desolate, has her hope set on God, and continues in petitions and prayers night and day. 6 But she who gives herself to pleasure is dead while she lives.

11 But refuse younger widows, for when their passions lead them away from Christ, and they desire to marry, 12 rejecting their first pledge, they incur condemnation. 13 Besides, they also learn to be idle, going about from house to house, and not only idle, but also gossips and busybodies, saying things which they ought not say.

14 I desire therefore that the younger widows marry, bear children, manage the household, and give no occasion for the adversary to insult. 15 For already some have turned away after Satan. 16 If any man or woman who believes has widows, let them give them relief, and do not let the assembly be burdened, that it might give relief to those who are truly widows. 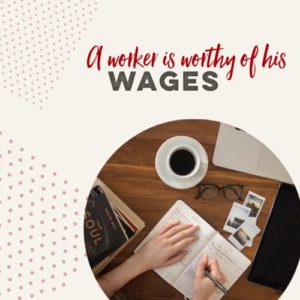 “You shall not muzzle the ox when it treads out the grain.”

“The laborer is worthy of his wages.”

21 I command you in the sight of God, and the Lord Jesus Christ, and the chosen angels, that you observe these things without prejudice, doing nothing by partiality. 22 Lay hands hastily on no one. Do not be a participant in other people’s sins. Keep yourself pure. 23 Be no longer a drinker of water only, but use a little wine for your stomach’s sake and your frequent infirmities.

24 Some men’s sins are evident, preceding them to judgment, and some also follow later. 25 In the same way also there are good works that are obvious, and those that are not obvious cannot be hidden.

19 Then you spoke in vision to your saints,
and said, “I have given strength to the warrior.
I have exalted a young man from the people.
20 I have found David, my servant.
I have anointed him with my holy oil,
21 with whom my hand shall be established.
My arm will also strengthen him.
22 No enemy will tax him.
No wicked man will oppress him.
23 I will beat down his adversaries before him,
and strike those who hate him.

24 But my faithfulness and my loving kindness
will be with him.
In my name, his horn will be exalted.
25 I will set his hand also on the sea,
and his right hand on the rivers.
26 He will call to me, ‘You are my Father,
my God, and the rock of my salvation!’

27 I will also appoint him my firstborn,
the highest of the kings of the earth.
28 I will keep my loving kindness for him forevermore.
My covenant will stand firm with him.

29 I will also make his offspring endure forever,
and his throne as the days of heaven.
30 If his children forsake my law,
and do not walk in my ordinances,
31 if they break my statutes,
and do not keep my commandments,
32 then I will punish their sin with the rod,
and their iniquity with stripes.

46 How long, Lord?
Will you hide yourself forever?
Will your wrath burn like fire?
47 Remember how short my time is,
for what vanity you have created all the children of men!
48 What man is he who shall live and not see death,
who shall deliver his soul from the power of Sheol?

52 Blessed be the Lord forevermore.