4 When Zedekiah the king of Judah and all the men of war saw them, then they fled, and went out of the city by night, by the way of the king’s garden, through the gate between the two walls; and he went out toward the Arabah. 5 But the army of the Chaldeans pursued them and overtook Zedekiah in the plains of Jericho. When they had taken him, they brought him up to Nebuchadnezzar king of Babylon to Riblah in the land of Hamath, and he pronounced judgment on him.

11 Now Nebuchadnezzar king of Babylon commanded Nebuzaradan the captain of the guard concerning Jeremiah, saying, 12 “Take him and take care of him. Do no harm to him, but do for him as he tells you.”

13 So Nebuzaradan the captain of the guard, along with Nebushazban, Rabsaris, and Nergal Sharezer, Rabmag, and all the chief officials of the king of Babylon, 14 sent for Jeremiah and took him from the court of the guard, and committed him to Gedaliah the son of Ahikam, the son of Shaphan, that he should take him home. So he lived among the people.

15 Now the word of the Lord came to Jeremiah, while he was confined to the court of the guard, saying, 16 “Go and speak to Ebedmelech the Ethiopian, saying, ‘The Lord of Hosts, the God of Israel, says: “I will bring my words on this city for disaster and not for good, and they will be accomplished before you in that day. 17 But I will deliver you in that day,” says the Lord, “and you will not be given into the hand of the men of whom you are afraid. 18 For I will surely save you, and you will not fall by the sword, but you will escape with your life, because you have put your trust in me,” says the Lord.’ ”

1 The word which came to Jeremiah from the Lord, after Nebuzaradan the captain of the guard had let him go from Ramah, when he had taken him being bound in chains among all the captives of Jerusalem and Judah, who were taken captive to Babylon. 2 The captain of the guard took Jeremiah, and said to him, “The Lord your God pronounced this disaster on this place, 3 and the Lord has brought it about, and has done according to what he spoke. Because you people have sinned against the Lord, and have not obeyed his voice, therefore this thing has come upon you.

5 Now when Jeremiah had not yet gone back, Nebuzaradan said to him, “Go back then, to Gedaliah the son of Ahikam, the son of Shaphan, whom the king of Babylon has made governor over the cities of Judah, and dwell with him among the people, or go wherever it seems right to you to go.”

So the captain of the guard gave him food and a present and let him go. 6 Then Jeremiah went to Gedaliah the son of Ahikam to Mizpah and lived with him among the people who were left in the land.

7 Now when all the captains of the forces who were in the fields, they and their men, heard that the king of Babylon had made Gedaliah the son of Ahikam governor in the land, and had committed to him men, women, children, and of the poorest of the land, of those who were not taken captive to Babylon, 8 then Ishmael the son of Nethaniah, and Johanan and Jonathan the sons of Kareah, and Seraiah the son of Tanhumeth, and the sons of Ephai the Netophathite, and Jezaniah the son of the Maacathite, they and their men came to Gedaliah to Mizpah.

9 Gedaliah the son of Ahikam the son of Shaphan swore to them and to their men, saying, “Do not be afraid to serve the Chaldeans. Dwell in the land and serve the king of Babylon, and it will be well with you. 10 As for me, I will dwell at Mizpah, to stand before the Chaldeans who will come to us, but you, gather wine and summer fruits and oil, and put them in your vessels, and dwell in your cities that you have taken.”

11 Likewise when all the Jews who were in Moab, and among the children of Ammon, and in Edom, and who were in all the countries, heard that the king of Babylon had left a remnant of Judah, and that he had set over them Gedaliah the son of Ahikam, the son of Shaphan, 12 then all the Jews returned from all the places where they had been driven, and came to the land of Judah, to Gedaliah, to Mizpah, and gathered a large quantity of wine and summer fruits.

13 Moreover Johanan the son of Kareah, and all the captains of the forces who were in the fields, came to Gedaliah to Mizpah, 14 and said to him, “Do you know that Baalis the king of the children of Ammon has sent Ishmael the son of Nethaniah to take your life?”

15 Then Johanan the son of Kareah spoke to Gedaliah in Mizpah secretly, saying, “Please let me go, and I will kill Ishmael the son of Nethaniah, and no one will know of it. Why should he take your life, that all the Jews who are gathered to you should be scattered, and the remnant of Judah perish?”

16 But Gedaliah the son of Ahikam said to Johanan the son of Kareah, “You shall not do this thing; for you speak falsely of Ishmael.”

1 Paul, an apostle of Jesus Christ through the will of God, according to the promise of the life which is in Christ Jesus,

2 To Timothy, my beloved child:

Grace, mercy, and peace, from God the Father and Christ Jesus our Lord.

3 I thank God, whom I serve as my forefathers did, with a pure conscience. How unceasing is my memory of you in my petitions, night and day, 4 longing to see you, remembering your tears, that I may be filled with joy, 5 having been reminded of the sincere faith that is in you, which lived first in your grandmother Lois, and your mother Eunice, and, I am persuaded, in you also.

8 Therefore do not be ashamed of the testimony of our Lord, nor of me his prisoner, but endure hardship for the gospel according to the power of God. 9 He saved us and called us with a holy calling, not according to our works, but according to his own purpose and grace, which was given to us in Christ Jesus before times eternal, 10 but has now been revealed by the appearing of our Savior, Christ Jesus, who abolished death, and brought life and immortality to light through the gospel. 11 For this I was appointed as a preacher, an apostle, and a teacher of the Gentiles.

12 For this reason I also suffer these things. Yet I am not ashamed, for I know him whom I have believed, and I am persuaded that he is able to guard that which I have committed to him until that day.

15 This you know, that all who are in Asia turned away from me, of whom are Phygelus and Hermogenes. 16 May the Lord grant mercy to the house of Onesiphorus, for he often refreshed me, and was not ashamed of my chains. 17 In fact, when he was in Rome, he looked diligently for me and found me.

18 May the Lord grant that Onesiphorus finds the mercy of the Lord mercy on that day, considering how many ways he served at Ephesus, as you are well aware.

The Lord is My Refuge

1 He who dwells in the secret place of the Most High
will rest in the shadow of the Almighty.
2 I will say of the Lord, “He is my refuge and my fortress,
my God, in whom I trust.”

3 For he will deliver you from the snare of the fowler,
and from the deadly pestilence.
4 He will cover you with his feathers.
Under his wings you will take refuge.
His faithfulness is your shield and rampart.
5 You shall not be afraid of the terror by night,
nor of the arrow that flies by day,
6 nor of the pestilence that walks in darkness,
nor of the destruction that wastes at noonday.

7 A thousand may fall at your side,
and 10,000 at your right hand,
but it will not come near you.
8 You will only look with your eyes,
and see the retribution of the wicked. 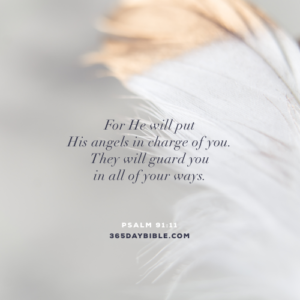 9 Because you have made the Lord your refuge,
and the Most High your dwelling place,
10 no evil shall happen to you,
neither shall any plague come near your dwelling.
11 For he will put his angels in charge of you,
to guard you in all your ways.
12 They will bear you up in their hands,
so that you will not dash your foot against a stone.
13 You will tread on the lion and cobra.
You will trample the young lion and the serpent underfoot.

1 Like snow in summer, and as rain in harvest,
so honor is not fitting for a fool.
2 Like a fluttering sparrow,
like a darting swallow,
so the undeserved curse does not come to rest.