The righteous shall flourish like the palm tree. He will grow like a cedar in Lebanon. Psalm 92:12

4 On the second day after he had killed Gedaliah, before anyone learned of it, 5 men came from Shechem, from Shiloh, and from Samaria, 80 men, having their beards shaved and their clothes torn, and having cut themselves, coming with grain offerings and frankincense in their hand, to bring them to the house of the Lord.

8 But ten men were found among those who said to Ishmael, “Don’t kill us; for we have stores of wheat, barley, oil, and honey hidden in the field.” So he stopped, and did not kill them among their brothers.

9 Now the pit in which Ishmael cast all the dead bodies of the men whom he had killed, by the side of Gedaliah (this was that which Asa the king had made for fear of Baasha king of Israel), Ishmael the son of Nethaniah filled it with those who were killed.

10 Then Ishmael took all of the people who were left in Mizpah captive, the king’s daughters, and all the people who remained in Mizpah, whom Nebuzaradan the captain of the guard had committed to Gedaliah the son of Ahikam. Ishmael the son of Nethaniah taken them captive, and departed to go over to the descendants of Ammon.

14 So all the people who Ishmael had taken captive from Mizpah turned around and came back, and went to Johanan the son of Kareah. 15 But Ishmael the son of Nethaniah escaped from Johanan with eight men and went to the descendants of Ammon.

16 Then Johanan the son of Kareah and all the captains of the forces who were with him took all the remnant of the people whom he had recovered from Ishmael the son of Nethaniah, from Mizpah, after he had killed Gedaliah the son of Ahikam, the men of war, with the women, the children, and the eunuchs, whom he had brought back from Gibeon. 17 They departed and lived in Geruth Chimham, which is by Bethlehem, to enter into Egypt 18 because of the Chaldeans, for they were afraid of them because Ishmael the son of Nethaniah had killed Gedaliah the son of Ahikam, whom the king of Babylon made governor over the land.

Warning against Going to Egypt

1 Then all the captains of the forces, and Johanan the son of Kareah, and Jezaniah the son of Hoshaiah, and all the people from the least to the greatest, came near 2 and said to Jeremiah the prophet, “Please let our supplication be presented before you, and pray for us to the Lord your God, for all of this remnant; for from many, we are left but a few, as you can see; 3 that the Lord your God may show us the way in which we should walk, and the things that we should do.”

4 Then Jeremiah the prophet said to them, “I have heard you. I will pray to the Lord your God according to your words; and it will happen that whatever thing the Lord answers you, I will declare it to you. I will keep nothing back from you.”

7 After ten days, the word of the Lord came to Jeremiah. 8 Then he called Johanan the son of Kareah, and all the captains of the forces who were with him, and all the people from the least to the greatest, 9 and said to them, “The Lord, the God of Israel, to whom you sent me to present your supplication before him, says: 10 ‘If you will remain in this land, then I will build you up, and not pull you down, and I will plant you, and not pluck you up; for I am relenting in the disaster that I have brought on you. 11 Do not be afraid of the king of Babylon, of whom you are afraid. Do not be afraid of him,’ says the Lord: ‘for I am with you to save you, and to deliver you from his hand. 12 I will grant you mercy, that he may have mercy on you, and cause you to return to your own land.

13 “ ‘But if you say, “We will not dwell in this land;” so that you do not obey the voice of the Lord your God, 14 saying, “No; but we will go into the land of Egypt, where we will see no war, nor hear the sound of the trumpet, nor hunger for bread; and there will we dwell,” ’ 15 now therefore hear the word of the Lord, O remnant of Judah. The Lord of Hosts, the God of Israel, says, ‘If you indeed set your faces to enter into Egypt, and go to live there; 16 then it will happen that the sword, which you fear, will overtake you there in the land of Egypt, and the famine, about which you are afraid, will follow close behind you there in Egypt, and you will die there.

17 So will it be with all the men who set their faces to go into Egypt to live there. They will die by the sword, by famine, and by pestilence. None of them will remain or escape from the disaster that I will bring on them.’ 18 For the Lord of Hosts, the God of Israel, says: ‘As my anger and my wrath has been poured out on the inhabitants of Jerusalem, so my wrath will be poured out on you, when you enter into Egypt, and you will be an object of horror, an appalling, a curse, and a reproach, and you will see this place no more.’

19 “The Lord has spoken concerning you, remnant of Judah, ‘Do not go into Egypt!’ Know certainly that I have testified to you today. 20 For you have dealt deceitfully against your own souls; for you sent me to the Lord your God, saying, ‘Pray for us to the Lord our God; and according to all that the Lord our God says, so declare to us, and we will do it.’ 21 I have declared it to you today, but you have not obeyed the voice of the Lord your God in anything for which he has sent me to you. 22 Now therefore know certainly that you will die by the sword, by famine, and by pestilence in the place where you desire to go live.”

1 You therefore, my child, be strengthened in the grace that is in Christ Jesus. 2 The things which you have heard from me among many witnesses, commit the same things to faithful men, who will be able to teach others also. 3 You therefore must endure hardship as a good soldier of Christ Jesus. 4 No soldier on duty entangles himself in the affairs of life, that he may please him who enrolled him as a soldier. 5 Also, if anyone competes in athletics, he is not crowned unless he has competed by the rules. 6 The farmer who labors must be the first to get a share of the crops.

7 Consider what I say, and may the Lord give you understanding in all things.

8 Remember Jesus Christ, risen from the dead, of the offspring of David, according to my gospel, 9 in which I suffer hardship to the point of being chained like a criminal. But the word of God is not chained. 10 Therefore I endure all things for the sake of the chosen ones, that they also may obtain the salvation which is in Christ Jesus with eternal glory.

11 This saying is trustworthy:

“For if we died with him,
we will also live with him.
12 If we endure,
we will also reign with him.
If we deny him,
he also will deny us.
13 If we are faithless,
he remains faithful,
for he cannot deny himself.”

14 Remind them of these things, charging them in the sight of God, that they do not argue about unprofitable words that lead to the ruin of those who hear them.

15 Be diligent to present yourself approved by God, a workman who does not need to be ashamed, properly handling the Word of Truth.

16 But shun empty chatter, for it will go further in ungodliness, 17 and those words will consume like gangrene, of whom is Hymenaeus and Philetus, 18 men who have erred concerning the truth, saying that the resurrection is already past, and overthrowing the faith of some.

19 However God’s firm foundation stands, having this seal, “The Lord knows those who are his,” and, “Let every one who calls on the name of the Lord turn away from unrighteousness.”

20 Now in a large house there are not only vessels of gold and of silver, but also of wood and of clay. Some are for honor, and some for dishonor. 21 If anyone therefore purges himself from these, he will be a vessel for honor, sanctified, and suitable for the master’s use, prepared for every good work.

22 Flee from youthful lusts, but pursue righteousness, faith, love, and peace with those who call on the Lord out of a pure heart. 23 But refuse foolish and ignorant controversy, knowing that it breeds quarreling. 24 The servant of the Lord must not quarrel, but be gentle toward all, able to teach, patient, 25 in gentleness correcting those who oppose him. Perhaps God may give them repentance leading to a full knowledge of the truth, 26 and they may recover themselves out of the devil’s snare, having been taken captive by him to his will.

How Great Are Your Works 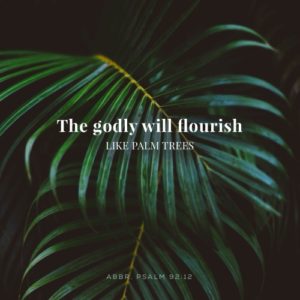 A Psalm. A song for the Sabbath day.

1 It is a good thing to give thanks to the Lord,
to sing praises to your name, Most High,
2 to proclaim your loving kindness in the morning,
and your faithfulness every night,
3 with the ten-stringed lute, with the harp,
and with the melody of the lyre.
4 For you, Lord, have made me glad through your work.
I will triumph in the works of your hands.
5 How great are your works, Lord!
Your thoughts are very deep.

6 A senseless man does not know this,
and neither does a fool understand,
7 that though the wicked spring up like the grass,
and all the evildoers flourish,
they will be destroyed forever.
8 But you, Lord, are on high forevermore.
9 For your enemies, Lord,
indeed, your enemies shall perish.
All the evildoers will be scattered.

10 But you have exalted my horn
like that of the wild ox.
I am anointed with fresh oil.
11 My eye has also seen my enemies.
My ears have heard of the wicked enemies
who rise up against me.

12 The righteous shall flourish like the palm tree.
He will grow like a cedar in Lebanon.
13 They are planted in the house the Lord.
They will flourish in the courts of our Lord.
14 They will still produce fruit in old age.
They will be full of sap and green,
15 to show that the Lord is upright.
He is my rock,
and there is no unrighteousness in him.