Every Scripture is God-breathed and profitable for teaching, for reproof, for correction, and for instruction in righteousness. 2 Timothy 3:16

1 It happened that when Jeremiah had finished speaking to all the people all the words of the Lord their God, every word which the Lord had given him to tell them, 2 then Azariah the son of Hoshaiah, Johanan the son of Kareah, and all the proud men spoke, saying to Jeremiah, “You are lying! The Lord our God has not sent you to say, ‘You shall not go into Egypt to live there;’ 3 but Baruch the son of Neriah has turned you against us, to deliver us into the hand of the Chaldeans, that they may put us to death, and take us captive to Babylon.”

8 Then the word of the Lord came to Jeremiah in Tahpanhes, saying, 9 “Take great stones in your hand, and hide them in mortar in the brick work, which is at the entry of Pharaoh’s house in Tahpanhes, in the sight of the men of Judah. 10 Tell them, the Lord of Hosts, the God of Israel, says: ‘I will send for Nebuchadnezzar the king of Babylon and take my servant, and will set his throne over these stones that I have hidden; and he will spread his royal pavilion over them. 11 He will come and will strike the land of Egypt; those destined for death will be put to death, and those destined for captivity to captivity, and those destined for the sword to the sword.

12 I will set fire to the houses of the gods of Egypt. He will burn them down and take the people captive. He will array himself with the land of Egypt, like a shepherd puts on his garment; and he will leave there in peace. 13 He will also break the pillars of Beth Shemesh, that is in the land of Egypt; and he will burn the houses of the gods of Egypt with fire.’ ”

Judgment on the Jews in Egypt

1 The word that came to Jeremiah concerning all the Jews who lived in the land of Egypt, who lived at Migdol, and at Tahpanhes, and at Memphis, and in the country of Pathros, saying, 2 “The Lord of Hosts, the God of Israel, says: ‘You have seen all the disaster that I have brought on Jerusalem, and on all the cities of Judah. Today they are desolate, and no man dwells in them 3 because of their wickedness which they have committed, provoking me to anger by burning incense in service to other gods that they did not know, neither they, nor you, nor your fathers.

4 However I sent to you all my servants the prophets, rising up early and sending them, saying, “Oh, do not do this abominable thing that I hate.” 5 But they did not listen and did not incline their ear. They did not turn from their wickedness and stop burning incense to other gods. 6 Therefore my wrath and my anger was poured out and burned in the cities of Judah and in the streets of Jerusalem, and they are wasted and desolate, as it is today.’

7 “Therefore now the Lord, the Lord of Hosts, the God of Israel, says: ‘Why do you commit this great evil against your own souls, to cut off from yourselves man and woman, infant and nursing child from the midst of Judah, to leave yourselves without anyone remaining; 8 provoking me to anger with the works of your hands, burning incense to other gods in the land of Egypt, where you have gone to live, that you may be cut off, and that you may be a curse and a reproach among all the nations of the earth?

11 “Therefore the Lord of Hosts, the God of Israel, says: ‘I will set my face against you for disaster, to cut off all Judah. 12 I will take the remnant of Judah, who are determined to go into the land of Egypt to live there, and they will all be consumed. They will fall in the land of Egypt. They will be consumed by sword and by famine. They will die, from the least to the greatest, by sword and by famine. They will be an object of horror, an astonishment, and a curse, and a reproach.

The Stubbornness of the People

21 “The incense that you burned in the cities of Judah, and in the streets of Jerusalem, you and your fathers, your kings and your leaders, and the people of the land, did God not remember this and bring it to mind? 22 Thus the Lord could no longer bear it, because of the wickedness of your deeds, and because of the abominations which you have committed. Therefore your land has become desolate, and an astonishment, and a curse, without inhabitant, as it is today. 23 Because you have burned incense, and because you have sinned against the Lord, and have not obeyed the voice of the Lord, nor walked in his law, nor in his statutes, nor in his testimonies; therefore this disaster has happened to you, as it is today.”

24 Moreover Jeremiah said to all the people, including all the women,

“Hear the word of the Lord, all Judah who are in the land of Egypt! 25 The Lord of Hosts, the God of Israel, says, ‘You and your wives have both spoken with your mouths, and with your hands have fulfilled it, saying, “We will surely perform the vows that we have made, burning incense to the queen of the sky, and pouring out drink offerings to her.”

“ ‘Establish then your vows, and do them.’

29 “ ‘This will be the sign to you,’ says the Lord, ‘that I will punish you in this place, that you may know that my words will surely stand against you for disaster.’ 30 The Lord says, ‘I will give Pharaoh Hophra king of Egypt into the hand of his enemies, and into the hand of those who seek his life, as I gave Zedekiah king of Judah into the hand of Nebuchadnezzar king of Babylon, who was his enemy, and sought his life.’ ”

Evil in the Last Days

1 But know this: that in the last days, grievous times will come. 2 For men will be lovers of self, lovers of money, boastful, arrogant, blasphemers, disobedient to parents, unthankful, unholy, 3 without natural affection, unforgiving, slanderers, without self-control, fierce, not lovers of good, 4 traitors, headstrong, conceited, lovers of pleasure rather than lovers of God, 5 holding a form of godliness, but having denied its power. Turn away from these people!

6 For some of these are people who creep into houses and take captive gullible women loaded down with sins, led away by various lusts, 7 always learning, and never able to come to the knowledge of the truth. 8 Just as Jannes and Jambres opposed Moses, so these also oppose the truth, men corrupted in mind, reprobates concerning the faith. 9 But they will proceed no further. For their folly will be evident to all men, as theirs also came to be. 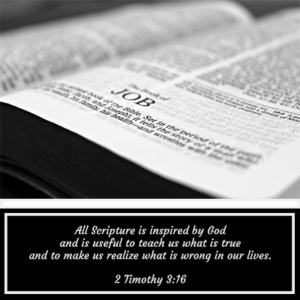 All Scripture is God-Breathed

10 But you followed my teaching, conduct, purpose, faith, patience, love, steadfastness, 11 persecutions, and suffering, the things that happened to me at Antioch, Iconium, and Lystra. I endured those persecutions, and the Lord delivered me from all of it. 12 Yes, and all who desire to live godly in Christ Jesus will suffer persecution. 13 But evil men and impostors will grow worse and worse, deceiving and being deceived.

14 But you remain in the things which you have learned and have been assured of, knowing from whom you have learned them. 15 From infancy, you have known the holy Scriptures which are able to make you wise for salvation through faith, which is in Christ Jesus. 16 Every Scripture is God-breathed and profitable for teaching, for reproof, for correction, and for instruction in righteousness, 17 that each person who belongs to God may be complete, thoroughly equipped for every good work.

1 The Lord reigns!
He is clothed with majesty!
The Lord is armed with strength.
The world also is firmly established.
It cannot be moved.
2 Your throne is established from long ago.
You are from everlasting.

3 The floods have risen, Lord.
The floods have raised their voice.
The floods lift up their waves.
4 Above the voices of many waters,
the mighty breakers of the sea,
God on high is mighty.
5 Your statutes stand firm.
Holiness adorns your house, Lord,
forevermore.

The Lord Remembers His People

4 They pour out arrogant words.
All the evildoers boast.
5 They break your people in pieces, Lord,
and afflict your heritage.
6 They kill the widow and the alien,
and murder the fatherless.
7 They say, “The Lord will not see,
neither will the God of Jacob regard it.”

8 Take heed, you senseless among the people,
you fools. When will you be wise?
9 He who implanted the ear, will he not hear?
He who formed the eye, will he not see?
10 He who disciplines the nations, will he not punish?
He who teaches man knows.
11 The Lord knows the thoughts of man,
that they are futile.

12 Blessed is the man whom you discipline, Lord,
and teach from your law,
13 that you may give him rest from the days of adversity,
until the pit is dug for the wicked.
14 For the Lord will not reject his people,
neither will he forsake his inheritance.
15 For judgment will return to righteousness.
All the upright in heart shall follow it.

16 Who will rise up for me against the wicked?
Who will stand up for me against those who do evil?
17 Unless the Lord had been my help,
my soul would have soon lived in silence.
18 When I said, “My foot is slipping!”
Your loving kindness, Lord, held me up.
19 In the multitude of my thoughts within me,
your comforts delight my soul.

20 Shall the throne of wickedness have fellowship with you,
which, by its own statute, brings about mischief?
21 They gather themselves together against the the righteous,
and condemn the innocent blood.
22 But the Lord has been my high tower,
my God, the rock of my refuge.
23 He has brought on them their own iniquity,
and will cut them off in their own wickedness.
The Lord, our God, will cut them off.

6 One who sends a message by the hand of a fool
is cutting off feet and drinking violence.
7 Like the legs of the lame that hang loose,
so is a parable in the mouth of fools.
8 As one who binds a stone in a sling,
so is he who gives honor to a fool.