Be exalted, God, above the heavens. Let your glory be over all the earth. Psalm 57:11

1 On that day you will say,

“I will give thanks to you, Lord;
for though you were angry with me,
your anger has turned away and you comfort me.
2 God is my salvation. I will trust, and will not be afraid;
for the Lord God is my strength and song;
and he has become my salvation.”

3 Therefore with joy you will draw water out of the wells of salvation. 4 In that day you will say,

“Give thanks to the Lord! Call on his name.
Declare his works among the peoples.
Proclaim that his name is exalted!
5 Sing to the Lord, for he has done excellent things!
Let this be known in all the earth!
6 Cry aloud and shout, you inhabitant of Zion;
for the Holy One of Israel is great among you!”

A Judgment against Babylon

1 An oracle concerning Babylon, which Isaiah the son of Amoz saw.

2 Raise up a banner on the bare mountain!
Raise your voice to them!
Wave your hand to them to go into the gates of the nobles.
3 I have commanded my consecrated ones;
yes, I have called my mighty men who exult in my triumph,
to execute my wrath.
4 Listen, the sound of a great multitude is in the mountains;
the sound of an uproar of the kingdoms of the nations gathered together!
The Lord of Hosts is mustering the army for the battle.
5 They come from faraway lands,
from the uttermost part of heaven,
the Lord, and the weapons of his wrath,
to destroy the whole land.

6 Wail, for the day of the Lord is at hand!
It will come as destruction from the Almighty.
7 Therefore all hands will be feeble,
and everyone’s heart will melt.
8 They will be dismayed.
Pangs and sorrows will seize them.
They will be in pain like a woman in labor.
They will look in amazement one at another,
their faces enflamed.

9 The day of the Lord is coming,
cruel, with wrath and fierce anger;
to make the land a desolation,
and to destroy its sinners from it.
10 For the stars of the sky and its constellations will not give their light. The sun will be darkened in its going out, and the moon will not cause its light to shine.

13 Therefore I will make the heavens tremble,
and the earth will be shaken out of its place
in the wrath of the Lord of Hosts,
and in the day of his fierce anger.

16 Their infants also will be dashed in pieces
before their eyes.
Their houses will be ransacked,
and their wives raped.

17 I will stir up the Medes against them,
who will not value silver, and as for gold,
they will not delight in it.
18 Their bows will dash the young men in pieces;
and they shall have no pity on the fruit of the womb.
Their eyes will not spare children.
19 Babylon, the glory of kingdoms,
the beauty of the Chaldeans’ pride,
will be like when God overthrew Sodom and Gomorrah.

20 It will never be inhabited,
neither will it be lived in from generation to generation.
The Arabian will not pitch a tent there,
neither will shepherds make their flocks lie down there.
21 But wild animals of the desert will lie there,
and their houses will be full of jackals.
Ostriches will dwell there, a
nd wild goats will frolic there.
22 Wolves will cry in their fortresses,
and jackals in the pleasant palaces.
Her time is near to come,
and her days will not be prolonged.

1 For the Lord will have compassion on Jacob, and will once again choose Israel, and set them in their own land. The foreigner will join himself with them, and they will unite with the house of Jacob. 2 Nations will lead them, and bring them back to their place. The house of Israel will possess them as servants and slaves in the land of the Lord. They will take as captives those whose captives they were; and they shall rule over their oppressors.

3 It will happen in the day that the Lord will give you rest from your sorrow, from your trouble, and from the hard labor into which you were forced, 4 you will mock the king of Babylon, saying,

“How the oppressor has ceased!
The golden city has ceased!”
5 The Lord has broken the rod of the wicked,
the scepter of the rulers,
6 who struck the peoples in anger
with continuous blows,
who ruled the nations in anger,
with a persecution that no one restrained.
7 The whole earth is at rest and is quiet.
They break out in song.
8 Yes, the cypress trees rejoice with you,
with the cedars of Lebanon, saying,
“Since you are humbled,
no lumberjack has come up against us.”

9 The grave from beneath has moved
for you to meet you at your coming.
It stirs up the departed spirits for you,
all the rulers of the earth.
It has raised up from their thrones
all the kings of the nations.
10 They all will answer and ask you,
“Have you also become as weak as we are?
Have you become like us?”
11 Your pomp has brought down to the grave,
with the sound of your stringed instruments.
Maggots are spread out under you,
and worms cover you.

12 How you have fallen from heaven,
shining one, son of the dawn!
How you are cut down to the ground,
who laid the nations low!
13 You said in your heart,
“I will ascend into heaven!
I will exalt my throne above the stars of God!
I will sit on the mountain of assembly, in the far north!
14 I will ascend above the heights of the clouds!
I will make myself like the Most High!”

15 Yet you shall be brought down to the grave,
to the depths of the pit.
16 Those who see you will stare at you.
They will wonder at you, saying,
“Is this the man who made the earth tremble,
who shook kingdoms,
17 who made the world like a wilderness,
and overthrew its cities,
who didn’t release his prisoners to their home?”

18 All the kings of the nations, lie in glory,
each in his own tomb.
19 But you are cast out of your tomb
like an rejected branch,
clothed with the slain,
who are thrust through with the sword,
who go down to the stones of the pit;
like a dead body trodden under foot.
20 You will not join them in burial,
because you have destroyed your land
and killed your people.
The offspring of the wicked
will never again be mentioned.

21 Prepare for slaughter of his sons
because of the sins of their fathers.
They will never rise up and possess the earth
or fill the world with cities.
22 “I will rise up against them,” says the Lord of Hosts,
“and cut off from Babylon name and remnant,
and son and son’s son,” says the Lord.

23 “I will also make it a possession
for the porcupine, and pools of water.
I will sweep it with the broom of destruction,”

24 The Lord of Hosts has sworn,

“Surely, as I have thought,
so shall it happen;
and as I have purposed,
so shall it stand:
25 that I will break the Assyrian in my land,
and tread him under foot on my mountains.
Then his yoke will leave them,
and his burden leave their shoulders.

28 This burden was in the year that king Ahaz died.

29 Do not rejoice that the rod
that struck you is broken,
all of you Philistines;
for from the root of that serpent
a viper will emerge,
and his fruit will be a fiery flying serpent.
30 The firstborn of the poor will eat,
and the needy will lie down in safety;
and I will kill your root with famine,
and your remnant will be killed.

31 Howl, gate! Cry, city!
You are melted away,
you Philistines, all of you;
for smoke comes out of the north,
and there is no straggler among his ranks.

32 What will they answer
the messengers of the nation?
That the Lord has founded Zion,
and in her the afflicted of his people will take refuge.

1 This is the third time I am coming to you. “Every fact must be established by the testimony of two or three witnesses.”

2 I warned you when I was present the second time, so now, being absent, I write to those who have sinned before now, and to all the rest, that, if I come again, I will not be lenient; 3 seeing that you seek a proof of Christ who speaks in me; who toward you is not weak, but is powerful in you. 4 For he was crucified through weakness, yet he lives through the power of God. For we also are weak in him, but we will live with him through the power of God toward you.

7 Now I pray to God that you do no evil; not that we may appear approved, but that you may do that which is honorable, though we are as reprobate. 8 For we can do nothing against the truth, but for the truth. 9 For we rejoice when we are weak and you are strong. We also pray for this: your becoming perfect.

10 For this reason I am writing these things while absent, that I may not deal sharply when present, according to the authority which the Lord gave me for building up, and not for tearing down.

11 Finally, brothers, rejoice! Be perfected. Be comforted. Be of the same mind. Live in peace, and the God of love and peace will be with you. 12 Greet one another with a holy kiss.

13 All the saints greet you.

14 The grace of the Lord Jesus Christ, the love of God, and the fellowship of the Holy Spirit be with you all. Amen.

My Soul Takes Refuge in You

For the Chief Musician. To the tune of “Do Not Destroy.” A poem by David, when he fled from Saul, in the cave. 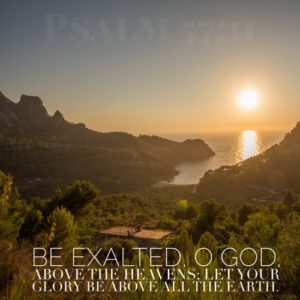 1 Be merciful to me, God, be merciful to me,
for my soul takes refuge in you.
Yes, in the shadow of your wings, I will take refuge,
until disaster has passed.
2 I cry out to God Most High,
to God who accomplishes my requests for me.
3 He will send from heaven, and save me,
he rebukes the one who is pursuing me.

God will send out his loving kindness and his truth.
4 I am among lions.
I lie among ravenous beasts,
the sons of men, whose teeth are spears and arrows,
and their tongue a sharp sword.
5 Be exalted, O God, above the heavens!
Let your glory be over all the earth!

6 They have prepared a net for my steps.
I am bowed down.
They dig a pit before me.
They fall into the middle of it themselves.

9 I will give thanks to you, Lord, among the peoples.
I will sing praises to you among the nations.
10 For your great loving kindness reaches to the heavens,
and your truth to the skies.
11 Be exalted, God, above the heavens.
Let your glory be over all the earth.

9 Do not speak in the ears of a fool,
for he will despise the wisdom of your words.

10 Do not move the ancient boundary stone.
Do not encroach on the fields of the fatherless,
11 for their Defender is strong.
He will plead their case against you.