You know my sitting down and my rising up. You perceive my thoughts from afar. Psalm 139:2

1 Moab rebelled against Israel after the death of Ahab. 2 Ahaziah fell down through the lattice in his upper room that was in Samaria and became sick. So he sent messengers and said to them, “Go, inquire of Baal Zebub, the god of Ekron, whether I will recover from this illness.”

3 But the angel of the Lord said to Elijah the Tishbite, “Get up, go and meet the messengers of the king of Samaria, and tell them, ‘Is it because there is no God in Israel, that you go to inquire of Baal Zebub, the god of Ekron? 4 Now therefore the Lord says, “You will not come down from the bed that you have gotten upon, but you will surely die.” ’ ” Then Elijah departed.

5 The messengers returned to him, and he said to them, “Why is it that you have returned?”

6 They said to him, “A man came up to meet us, and said to us, ‘Go, return to the king who sent you, and tell him, “The Lord says, ‘Is it because there is no God in Israel, that you send to inquire of Baal Zebub, the god of Ekron? Therefore you will not come down from the bed that you have gotten upon, but you will surely die.” ‘ ”

7 He said to them, “What kind of man was he who came up to meet you, and told you these words?”

8 They answered him, “He was a hairy man and wearing a leather belt around his waist.”

He said, “It’s Elijah the Tishbite.”

13 Again he sent a third captain of 50 with his 50 men. The third captain of 50 went up, and came and fell on his knees before Elijah, and begged him, and said to him, “Man of God, please let my life, and the life of these 50 of your servants, be precious in your sight. 14 Fire has come down from the sky and consumed the last two captains of 50 with their 50 men, but now let my life be precious in your sight.”

15 The Angel of the Lord said to Elijah, “Go down with him. Do not be afraid of him.”
Then he arose, and went down with him to the king. 16 He said to him, “The Lord says, ‘You have sent messengers to inquire of Baal Zebub, the god of Ekron. Is it because there is no God in Israel to inquire of his word? Therefore you will not come down from the bed the you have gotten upon, but you will surely die.’ ”

17 So he died according to the word of the Lord which Elijah had spoken. Jehoram began to reign in his place in the second year of Jehoram the son of Jehoshaphat king of Judah, because he had no son. 18 Now the rest of the acts of Ahaziah which he did, are they not written in the book of the chronicles of the kings of Israel?

1 When the Lord was about to take Elijah up by a whirlwind into heaven, Elijah went with Elisha from Gilgal. 2 Elijah said to Elisha, “Please wait here, for the Lord has sent me as far as Bethel.”

Elisha said, “As the Lord lives, and as you yourself live, I will not leave you.” So they went down to Bethel.

3 The sons of the prophets who were at Bethel came out to Elisha, and said to him, “Do you know that the Lord will take your master from you today?”

4 Elijah said to him, “Elisha, please wait here, for the Lord has sent me to Jericho.”
He said, “As the Lord lives, and as you yourself live, I will not leave you.” So they came to Jericho.

5 The sons of the prophets who were at Jericho came near to Elisha, and said to him, “Do you know that the Lord will take away your master from you today?”
He answered, “Yes, I know it. Hold your peace.”

6 Elijah said to him, “Please wait here, for the Lord has sent me to the Jordan.”

He said, “As the Lord lives, and as you yourself live, I will not leave you.” Then they both went on. 7 Fifty of the sons of the prophets went and stood opposite them at a distance, and they both stood by the Jordan. 8 Elijah took his mantle, rolled it up, and struck the waters, and they were divided to the right and to the left, so that they both went over on dry ground. 9 When they had gone over, Elijah said to Elisha, “Ask what I shall do for you, before I am taken from you.”

Elisha said, “Please let a double portion of your spirit be on me.”

11 As they continued on and talked, suddenly a chariot of fire and horses of fire separated them, and Elijah went up by a whirlwind into heaven. 12 Elisha saw it, and he cried, “My father, my father, the chariots of Israel and its horsemen!”

He saw him no more. Then he took hold of his own clothes, and tore them in two pieces. 13 He took up Elijah’s mantle that had fallen from him, went back, and stood by the bank of the Jordan. 14 He took Elijah’s mantle that had fallen from him, struck the waters, and said, “Where is the Lord, the God of Elijah?” When he had struck the waters, they were divided apart, and Elisha went over.

15 When the sons of the prophets who were at Jericho facing him saw him, they said, “The spirit of Elijah rests on Elisha.” They came to meet him, and bowed to the ground before him. 16 They said to him, “See now, there are with your servants, 50 strong men. Please let them go and seek your master. Perhaps the spirit of the Lord has taken him up and put him on some mountain, or into some valley.”

17 When they urged him until he was ashamed, he said, “Send them.”
Therefore they sent 50 men, and they searched for three days, but did not find him. 18 They came back to him while he stayed at Jericho, and he said to them, “Didn’t I tell you, ‘Don’t go?’ ”

19 The men of the city said to Elisha, “Please, this city is well situated, as my lord can see, but the water is bad, and the land is barren.”

20 He said, “Bring me a new jar and put salt in it.” Then they brought it to him. 21 He went out to the spring of the waters, threw salt into it, and said, “The Lord says, ‘I have healed these waters. There shall not be from there any more death or barren wasteland.’ ” 22 So the waters were healed to this day, according to Elisha’s word which he spoke.

The Gentiles Ask to Hear the Gospel

42 So when the Jews went out of the synagogue, the Gentiles begged that these words might be preached to them the next Sabbath. 43 Now when the synagogue broke up, many of the Jews and of the devout proselytes followed Paul and Barnabas, who, speaking to them, urged them to continue in the grace of God. 44 The next Sabbath, almost the whole city was gathered together to hear the word of God. 45 But when the Jews saw the multitudes, they were filled with jealousy, and contradicted the things which were spoken by Paul, and blasphemed.

46 Paul and Barnabas spoke out boldly, and said, “It was necessary that the word of the Lord should be spoken to you first. Since indeed you rejected it, and judge yourselves unworthy of eternal life, we turn to the Gentiles. 47 For so has the Lord commanded us, saying,
‘I have set you as a light for the Gentiles, that you should bring salvation to the uttermost parts of the earth.’”

48 As the Gentiles heard this, they were glad, and glorified the word of the Lord. As many as were appointed to eternal life believed. 49 The word of the Lord was spread abroad throughout all the region. 50 But the Jews stirred up the devout and prominent women and the leaders of the city, and stirred up a persecution against Paul and Barnabas, and threw them out of their borders. 51 But they shook off the dust of their feet against them, and came to Iconium. 52 The disciples were filled with joy and with the Holy Spirit.

Paul and Barnabas at Iconium

1 In Iconium, they entered together into the synagogue of the Jews, and so spoke that a great multitude both of Jews and of Greeks believed. 2 But the unbelieving Jews stirred up and poisoned the minds of the Gentiles against the brothers. 3 Therefore they stayed there a long time, speaking boldly in the Lord, who testified to the word of his grace, granting signs and wonders to be done by their hands. 4 But the multitude of the city was divided. Part sided with the Jews, and part with the apostles.

5 When some of both the Gentiles and the Jews, with their rulers, made a violent attempt to mistreat and stone them, 6 they became aware of it and fled to the cities of Lycaonia, Lystra, Derbe, and the surrounding region. 7 There they preached the Good News. 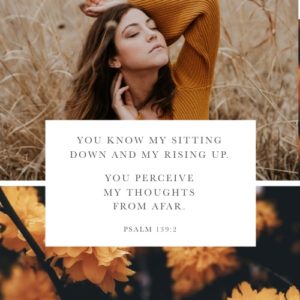 1 Lord, you have searched me,
and you know me.
2 You know my sitting down and my rising up.
You perceive my thoughts from afar.
3 You search out my path and my lying down,
and are acquainted with all my ways.
4 Before a word is on my tongue,
Lord, you know it altogether.
5 You hem me in behind and before.
You laid your hand on me.
6 This knowledge is beyond me.
It is lofty.
I cannot attain it.

7 Where could I go from your Spirit?
Or where could I flee from your presence?
8 If I ascend up into heaven, you are there.
If I make my bed in Sheol, you are there.
9 If I take the wings of the dawn,
and settle in the uttermost parts of the sea,
10 even there your hand will lead me,
and your right hand will hold me.
11 If I say, “Surely the darkness will overwhelm me.
The light around me will be night,”
12  the darkness does not hide from you,
but the night shines as the day.
The darkness is like light to you.

13 For you formed my inmost being.
You knit me together in my mother’s womb.
14 I will give thanks to you,
for I am fearfully and wonderfully made.
Your works are wonderful.
I know that very well.
15 My frame was not hidden from you,
when I was made in secret,
woven together in the depths of the earth.
16 Your eyes saw my body.
In your book they were all written,
the days that were ordained for me,
when as yet there were none of them.
17 How precious to me are your thoughts, God!
How vast is their sum!
18 If I would count them, they are more in number than the sand.
When I wake up, I am still with you.

19 If only you, God, would kill the wicked.
Get away from me, you bloodthirsty men!
20 For they speak against you wickedly.
Your enemies take your name in vain.
21 Lord, do I not hate those who hate you?
Am I not grieved with those who rise up against you?
22 I hate them with perfect hatred.
They have become my enemies.
23 Search me, God, and know my heart.
Try me, and know my thoughts.
24 See if there is any wicked way in me,
and lead me in the everlasting way.