He has remembered his loving kindness and his faithfulness toward the house of Israel. All the ends of the earth have seen the salvation of our God. Psalm 98:3

1 Then Jerubbaal (that is, Gideon) and all the people who were with him, rose up early and encamped beside the spring of Harod. Midian’s camp was on the north side of them, by the hill of Moreh, in the valley.

2 The Lord said to Gideon, “You have too many people with you for me to give the Midianites into your hand, lest Israel brag, saying, ‘My own hand has saved me.’ 3 Now therefore proclaim in the ears of the people, ‘Whoever is fearful and trembling, let him turn and depart from Mount Gilead.’ ” So 22,000 people returned, and 10,000 remained.

4 The Lord said to Gideon, “There are still too many people. Bring them down to the water, and I will test them for you there. It shall be, that those whom I tell you, ‘These shall go with you,’ shall go with you, and whoever I tell you, ‘Those shall not go with you,’ shall not go.” 5 So he brought the people down to the water, and the Lord said to Gideon, “Everyone who laps the water with his tongue, like a dog laps, you shall set him apart; the same for everyone who bows down on his knees to drink.” 6 The number of those who lapped, putting their hand to their mouth, was 300 men, but all the rest of the people bowed down on their knees to drink water. 7 The Lord said to Gideon, “I will save you by the 300 men who lapped and deliver the Midianites into your hand. Let all the other people go, each to his own place.”

8 So the people took food in their hand, and their trumpets. He sent all the rest of the Israelite men men to their own tents but retained the 300 men, and the Midianite’s camp was beneath him in the valley.

12 The Midianites and the Amalekites and all the people of the east lay along in the valley like locusts in their multitude, and their camels were without number, like the sand on the seashore.

13 When Gideon had come, there was a man telling a dream to his friend. He said, “I had a dream, and a cake of barley bread tumbled into the camp of Midian and came to the tent and struck it so that it fell, and turned it upside down so that the tent lay flat.”

14 His friend answered, “This is nothing other than the sword of Gideon the son of Joash, a man of Israel. The Lord has delivered Midian into his hand, with all the army.”

15 When Gideon heard the dream and its interpretation, he bowed in worship. Then he returned into the camp of Israel and said, “Get up, for the Lord has delivered the army of Midian into your hand!”

16 He divided the 300 men into three companies, and he put into the hands of all them, trumpets and empty pitchers, with torches within the pitchers.

17 He said to them, “Watch me, and do likewise. When I come to the outermost part of the camp, do as I do. 18 When I blow the trumpet, I and all who are with me, then you blow the trumpets also on every side of all the camp, and shout, ‘For the Lord and for Gideon!’ ”

19 So Gideon and the 100 men who were with him came to the outermost part of the camp at the beginning of the middle watch, when they had but newly set the watch. Then they blew the trumpets and broke the pitchers in their hands in pieces. 20 The three companies blew the trumpets, broke the pitchers, and held the torches in their left hands and the trumpets in their right hands with which to blow; and they shouted, “The sword of the Lord and of Gideon!” 21 They each stood in place around the camp, and the entire army ran, and they shouted, and put them to flight. 22 They blew the 300 trumpets, and the Lord set every man’s sword against his fellow and against all the army; and the army fled as far as Beth Shittah toward Zererah, as far as the border of Abel Meholah, by Tabbath. 23 The men of Israel were gathered together out of Naphtali, out of Asher, and out of all Manasseh, and pursued Midian.

24 Gideon sent messengers throughout the hill country of Ephraim, saying, “Come down against Midian and take over of the waters before them as far as Beth Barah and the Jordan!” So all the men of Ephraim were gathered together and took over the waters as far as Beth Barah and the Jordan. 25 They took the two princes of Midian, Oreb and Zeeb. They killed Oreb at Oreb’s rock, and Zeeb they killed at Zeeb’s wine press, as they pursued Midian. Then they brought the heads of Oreb and Zeeb to Gideon beyond the Jordan.

13 Pilate called together the chief priests, the rulers, and the people, 14 and said to them, “You brought this man to me as one that perverts the people, and having examined him before you, I found no basis for a charge against this man concerning those things of which you accuse him. 15 Neither has Herod, for I sent you to him, and see, nothing worthy of death has been done by him. 16 I will therefore chastise him and release him.”

17 Now he had to release one prisoner to them at the feast. 18 But they all cried out together, saying, “Away with this man! Release Barabbas to us!”— 19 one who was thrown into prison for a certain revolt in the city, and for murder.

20 Then Pilate spoke to them again, wanting to release Jesus, 21 but they shouted, saying, “Crucify! Crucify him!”

22 He said to them the third time, “Why? What crime has this man done? I have found no capital crime in him. I will therefore chastise him and release him.” 23 But they were urgent with loud voices, asking that he might be crucified. Their voices and the voices of the chief priests prevailed. 24 Pilate decreed that what they asked for should be done.

25 He released the one who had been thrown into prison for insurrection and murder, whom they asked for, but he delivered Jesus to their will.

26 When they led him away, they grabbed Simon of Cyrene, coming from the country and laid the cross on him, to carry it behind Jesus.

27 A great multitude of the people followed him, including women who also mourned and lamented him. 28 But Jesus, turning to them, said, “Daughters of Jerusalem, do not weep for me, but weep for yourselves and for your children. 29 For the days are coming in which they will say, ‘Blessed are the barren, the wombs that never bore, and the breasts that never nursed.’ 30 Then they will begin to tell the mountains, ‘Fall on us!’ and tell the hills, ‘Cover us.’ 31 For if they do these things when the tree is green, what will be done when it is dry?”

32 There were also others, two criminals, led with him to be put to death. 33 When they came to the place that is called “The Skull”, they crucified him there with the criminals, one on the right and the other on the left.

34 Jesus said, “Father, forgive them, for they know not what they are doing.”
Dividing his garments among them, they cast lots. 35 The people stood watching. The rulers with them also scoffed at him, saying, “He saved others. Let him save himself, if this is the Messiah of God, his chosen one!”

36 The soldiers also mocked him, coming to him and offering him vinegar 37 and saying, “If you are the King of the Jews, save yourself!”

38 An inscription was also written over him in letters of Greek, Latin, and Hebrew: “THIS IS THE KING OF THE JEWS.”

39 One of the criminals who was hanging there insulted him, saying, “If you are the Messiah, save yourself and us!”

40 But the other answered, and rebuking him said, “Do you not even fear God, seeing you are under the same condemnation? 41 And we indeed suffer justly, for we are receiving the due reward for our deeds, but this man has done nothing wrong.” 42 He said to Jesus, “Lord, remember me when you come into your Kingdom.”

43 Jesus said to him, “Assuredly I tell you, today you will be with me in Paradise.”

Let the Multitude of Islands Be Glad!

1 The Lord reigns!
Let the earth rejoice!
Let the multitude of islands be glad!
2 Clouds and darkness are around him.
Righteousness and justice are the foundation of his throne.
3 A fire goes before him,
and burns up his adversaries on every side.
4 His lightning lights up the world.
The earth sees, and trembles.
5 The mountains melt like wax at the presence of the Lord,
at the presence of the Lord of the whole earth.
6 The heavens declare his righteousness.
All the peoples have seen his glory.

7 Let all of them be shamed who serve engraved images,
who boast in their idols.
Worship him, all you gods!
8 Zion heard and was glad.
The daughters of Judah rejoiced
because of your judgments, O Lord.
9 For you, Lord, are most high above all the earth.
You are exalted far above all gods.
10 You who love the Lord, hate evil!
He preserves the souls of his saints.
He delivers them out of the hand of the wicked.
11 Light is sown for the righteous,
and gladness for the upright in heart.
12 Be glad in the Lord, you righteous people!
Give thanks to his holy Name.

Sing to the Lord a New Song! 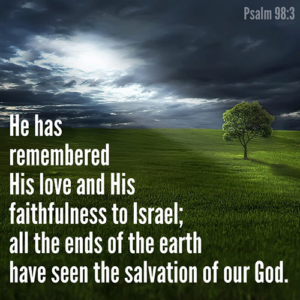 A Psalm.
1 Sing to the Lord a new song,
for he has done marvelous things!
His right hand and his holy arm have worked salvation for him.
2 The Lord has made known his salvation.
He has openly shown his righteousness in the sight of the nations.
3 He has remembered his love and his faithfulness to Israel.
All the ends of the earth have seen the salvation of our God.

4 Make a joyful noise to the Lord, all the earth!
Burst out and sing for joy, yes, sing praises!
5 Sing praises to the Lord with the harp,
with the harp and the voice of melody.
6 With trumpets and sound of the ram’s horn,
make a joyful noise before the Lord, the King.
7 Let the sea roar with its fullness;
the world, and those who dwell in it.
8 Let the rivers clap their hands.
Let the mountains sing for joy together.
9 Let them sing before the Lord,
for he comes to judge the earth.
He will judge the world with righteousness,
and the peoples with equity.

7 Stay away from a foolish man,
for you will not find knowledge on his lips.
8 The wisdom of the prudent is to think about his way,
but the folly of fools is deceit.