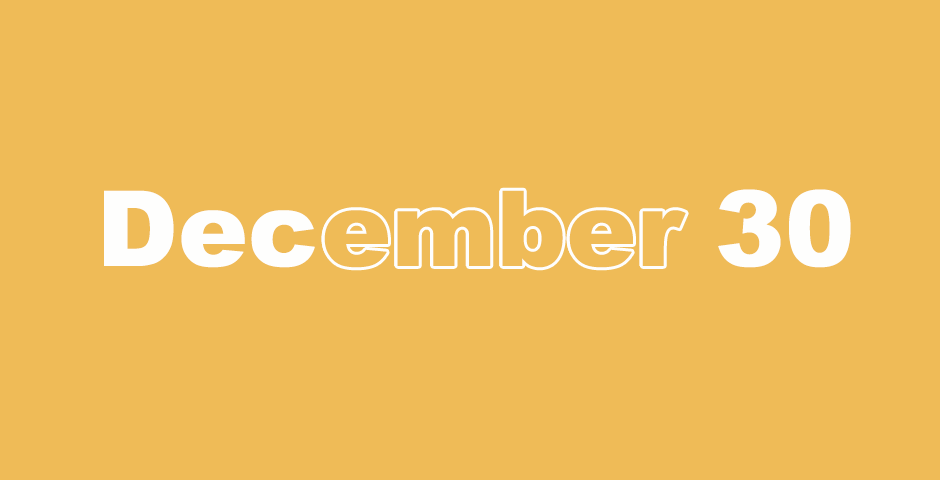 Have we not all one Father? Has not one God created us? Why do we deal treacherously with one another By profaning the covenant of the fathers?‭‭ Malachi‬ ‭2:10‬

The Lord’s Love for Israel

1 A revelation, the word of the Lord to Israel by Malachi.

Yet you say, “How have you loved us?”

The Lord answered, “Esau was Jacob’s brother, yet I loved Jacob, 3 and hated Esau. I laid his mountains bare and gave his heritage to the jackals of the wilderness.”

4 While Edom says, “We are beaten down, but we will return and build the wastelands,” the Lord of Hosts says, “They shall build, but I will tear down, and people will call them The Wicked Land: the people against whom the Lord is angry forever.”

5 Your own eyes will see it, and you will say, “The Lord is great—even beyond the border of Israel!”

Disobedience of the Priests

6 “A son honors his father, and a servant his master. If I am a father, then where is my honor? And if I am a master, where is the respect due me? Says the Lord of Hosts to you, priests, who despise my name.

You say, ‘How have we despised your name?’

7 You offer defiled bread on my altar.

You say, ‘How have we defiled you?’ When you say, ‘The table of the Lord is contemptible.’

9 “Now, please entreat the favor of the Lord, that he may be gracious to us. With this, will he accept any of you?” says the Lord of Hosts.

10 “Oh that there were one among you who would shut the temple doors, that you might not kindle a fire on my altar in vain! I am not pleased with you,” says the Lord of Hosts, “nor will I accept an offering at your hand.

13 You say also, ‘What a burden it is!’ and you have turned up your nose at it”, says the Lord of Hosts, “and you have brought lame, sick and stolen sacrifices. This is what you bring as the offering! Should I accept this at your hand?” says the Lord.

14 “But the deceiver is cursed, who has in his flock a male, and vows to offer it, but then sacrifices to the Lord a defective one, for I am a great King,” says the Lord of Hosts, “and my name is awesome among the nations.”

A Warning to Priests

1 “Now, you priests, this commandment is for you:

3 I will rebuke your offspring and will spread feces on your faces, the excrement from your feasts, and you will be taken away with it.

4 Then you will know that I have sent this commandment to you, that my covenant may be with Levi,” says the Lord of Hosts. 5 “My covenant of life and peace was with him, which I gave to him that he might revere me, and he was reverent toward me and stood in awe of my name.

6 The law of truth was in his mouth, and unrighteousness was not found on his lips. He walked with me in peace and uprightness, and turned many away from iniquity. 7 For the priest’s lips should keep knowledge, and they should seek the law from his mouth, for he is the messenger of the Lord of Hosts.

8 But you have turned away from the path. You have caused many to stumble in the law. You have corrupted the covenant of Levi,” says the Lord of Hosts. 9 “Therefore I have also made you contemptible and debased before all the people, according to how you have not kept my ways, but have shown partiality in presenting the law. 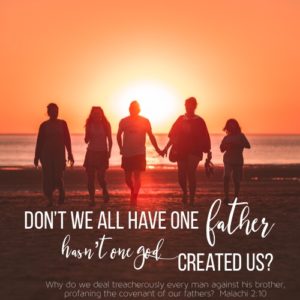 10 Have we not all one father? Has not one God created us? Why do we deal treacherously, every man against his brother, profaning the covenant of our fathers?

11 Judah has dealt treacherously, and an abomination has been committed in Israel and in Jerusalem, for Judah has profaned the holiness of the Lord’s temple, which he loves and has married the daughter of a foreign god worshiper. 12 May the Lord cut off from the tents of Jacob and from making an offering to the Lord of Hosts, the man who does this.

13 This also you do: you cover the Lord’s altar with tears, weeping, and groaning, because he does not regard your offering any more, or receive it with good will from your hand.

15 Did he not make you one, with a portion of the Spirit? Why one? He sought godly offspring. Therefore take heed to your spirit, and let no one deal treacherously against the wife of his youth.

16 For the Lord, the God of Israel says, “One who hates his wife and divorces covers his garment with violence!” says the Lord of Hosts. “Therefore pay attention to your spirit, that you are not unfaithful.

17 You have wearied the Lord with your words. Yet you say, ‘How have we wearied him?’

In that you say, ‘Everyone who does evil is good in the sight of the Lord, and he delights in them;’ or ‘Where is the God of justice?’

A New Heaven and a New Earth

1 I saw a new heaven and a new earth: for the first heaven and the first earth have passed away, and the sea is no more. 2 I saw the holy city, New Jerusalem, coming down out of heaven from God, prepared like a bride adorned for her husband.

3 I heard a loud voice from heaven saying,

“The Lord’s dwelling is with people,
and he will dwell with them,
and they will be his people,
and God himself will be with them as their God.
4 He will wipe away every tear from their eyes.
Death will be no more,
nor will there be mourning, or crying, or pain, any more.
The first things have passed away.”

5 He who sits on the throne said, “I am making all things new.” He said, “Write, for these words of God are faithful and true.” 6 He said to me, “I have become the Alpha and the Omega, the Beginning and the End. I will give freely to him who is thirsty from the spring of the water of life. 7 He who overcomes, I will give him these things. I will be his God, and he will be my son.

8 But for the cowardly, unbelieving, sinners, abominable, murderers, sexually immoral, sorcerers, idolaters, and all liars, their part is in the lake that burns with fire and sulfur, which is the second death.”

9 One of the seven angels who had the seven bowls, who were loaded with the seven last plagues came, and he spoke with me, saying, “Come here. I will show you the bride, the wife of the Lamb.”

15 He who spoke with me had for a measure a golden rod to measure the city, its gates, and its walls. 16 The city is square, and its length is as great as its width. He measured the city with the rod, 12,000 stadia. Its length, width, and height are equal. 17 Its wall is 144 cubits, by man’s measurement, measured by an angel.

18 The construction of its wall was jasper. The city was pure gold, like pure glass. 19 The foundations of the city’s wall were adorned with all kinds of precious stones.

The first foundation was jasper,
the second, sapphire,
the third, chalcedon,
the fourth, emerald,
20 the fifth, sardonyx,
the sixth, sardius,
the seventh, chrysolite,
the eighth, beryl,
the ninth, topaz,
the tenth, chrysoprase,
the eleventh, jacinth,
and the twelfth, amethyst.

21 The twelve gates were twelve pearls. Each one of the gates was made of one pearl. The city street was pure gold, like transparent glass.

22 I saw no temple in it, for the Lord God, the Almighty, and the Lamb, are its temple. 23 The city has no need for the sun or moon to shine, for the very glory of God illuminated it, and its lamp is the Lamb. 24 The nations will walk in its light. The kings of the earth bring the glory and honor of the nations into it. 25 Its gates will in no way be shut by day (for there will be no night there), 26 and they shall bring the glory and the honor of the nations into it so that they may enter. 27 There will in no way enter into it anything profane, or one who causes an abomination or a lie, but only those who are written in the Lamb’s book of life.

Sing to the Lord a New Song

Sing to the Lord a new song,
his praise in the assembly of the saints.
2 Let Israel rejoice in him who made them.
Let the children of Zion be joyful in their King.
3 Let them praise his name in the dance!
Let them sing praises to him with tambourine and harp!
4 For the Lord takes pleasure in his people.
He crowns the humble with salvation.
5 Let the saints rejoice in honor.
Let them sing for joy on their beds.

6 May the high praises of the Lord be in their mouths,
and a double-edged sword in their hand,
7 to execute vengeance on the nations,
and punishments on the peoples;
8 to bind their kings with chains,
and their nobles with fetters of iron;
9 to execute on them the written judgment.
All his saints have this honor.

10 Who can find a worthy woman?
For her price is far above rubies.
11 The heart of her husband trusts in her.
He shall have no lack of gain.
12 She does him good and not harm,
all the days of her life.
13 She seeks wool and flax
and works eagerly with her hands.

14 She is like the merchant ships.
She brings her bread from afar.
15 She rises also while it is yet night,
gives food to her household
and portions for her servant girls.
16 She considers a field and buys it.
With the fruit of her hands, she plants a vineyard.
17 She arms her waist with strength
and makes her arms strong.
18 She perceives that her merchandise is profitable.
Her lamp does not go out by night.
19 She lays her hands to the distaff,
and her hands hold the spindle.

20 She opens her arms to the poor;
yes, she extends her hands to the needy.
21 She is not afraid of the snow for her household,
for all her household are clothed with scarlet.
22 She makes for herself carpets of tapestry.
Her clothing is fine linen and purple.
23 Her husband is respected in the gates,
when he sits among the elders of the land.
24 She makes linen garments and sells them,
and delivers sashes to the merchant.