The Song of Moses

1 Give ear, you heavens, and I will speak.
Let the earth hear the words of my mouth.

2 Let my teaching fall like the rain,
and my speech condense like the dew,
as the misty rain on the tender grass,
as the showers on the herb.

3 For I will proclaim the Lord’s name.
Ascribe greatness to our God!

4 The Rock: his work is perfect,
for all his ways are just.
A God of faithfulness who does no wrong,
just and right is he.

5 They have dealt corruptly with him.
They are not his children, because of their defect.
They are a perverse and crooked generation.

6 Is this the way you repay the Lord,
foolish and unwise people?
Is he not your father who has bought you?
He has made you and established you.

7 Remember the days of old.
Consider the years of many generations.
Ask your father, and he will show you;
your elders, and they will tell you.

8 When the Most High gave to the nations their inheritance,
when he separated the children of men,
he set the boundaries of the peoples
according to the number of the Israelites.

9 For the Lord’s portion is his people.
Jacob is the lot of his inheritance.

10 He found him in a desert land,
in the waste howling wilderness.
He surrounded him.
He cared for him.
He kept him as the apple of his eye.

11 As an eagle that stirs up her nest,
that flutters over her young,
he spread abroad his wings,
he took them,
he bore them on his feathers.

12 The Lord alone led him.
There was no foreign god with him.

13 He made him ride on the high places of the earth.
He ate the increase of the field.
He caused him to suck honey out of the rock,
oil out of the hard rock,
14 butter from the herd, and milk from the flock,
with fat of lambs,
rams of the breed of Bashan, and goats,
with the finest of the wheat.
From the blood of the grape, you drank wine.

16 They moved him to jealousy with strange gods.
They provoked him to anger with abominations.

17 They sacrificed to demons, not God,
to gods that they did not know,
to new gods that came up recently,
which your fathers did not dread.

18 Of the Rock who became your father, you are unmindful,
and have forgotten the Lord who gave you birth.

19 The Lord saw it and abhorred them,
because of the provocation of his sons and his daughters.

20 He said, “I will hide my face from them.
I will see what their end will be,
for they are a very perverse generation,
children in whom is no faithfulness.

22 For a fire is kindled in my anger,
that burns to the lowest Sheol,
devours the earth with its increase,
and sets the foundations of the mountains on fire.

23 I will heap disasters on them.
I will spend my arrows on them.

24 They shall be wasted with hunger,
and devoured with burning heat
and bitter destruction.
I will send the teeth of animals on them,
with the venom of vipers that glide in the dust.

25 Outside the sword will bereave,
and in the rooms,
terror on both young man and virgin,
the nursing infant with the gray-haired man.

26 I said that I would scatter them afar.
I would make their memory to cease from among men;
27 were it not that I feared the provocation of the enemy,
lest their adversaries should judge wrongly,
lest they should say, ‘Our hand is exalted.
The Lord has not done all this.’

28 For they are a nation void of counsel.
There is no understanding in them.
29 Oh that they were wise, that they understood this,
that they would consider their latter end!

30 How could one chase a thousand,
and two put 10,000 to flight,
unless their Rock had sold them,
and God had delivered them up?

31 For their rock is not as our Rock,
even our enemies themselves concede.

32 For their vine is of the vine of Sodom,
of the fields of Gomorrah.
Their grapes are poison grapes.
Their clusters are bitter.

33 Their wine is the poison of serpents,
the cruel venom of asps.

34 “Is this not laid up in store with me,
sealed up among my treasures?

35 Vengeance is mine. I will repay them
at a time when their foot slips,
for the day of their calamity is at hand.
Their doom rushes at them.”

36 For the Lord will judge his people,
and have compassion on his servants,
when he sees that their power is gone,
that there is no one remaining, shut up or left at large.

37 He will say, “Where are their gods,
the rock in which they took refuge,
38 which ate the fat of their sacrifices,
and drank the wine of their drink offering?
Let them rise up and help you!
Let them be your protection. 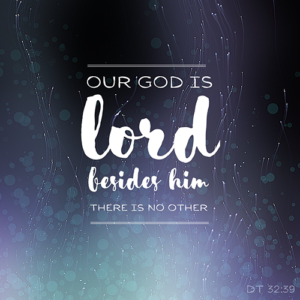 39 “See now that I myself am he.
There is no other god with me.
I bring death and I give life.
I wound, and I heal.
There is no one who can deliver out of my hand.

40 For I lift up my hand to heaven and declare,
as I live forever,
41 if I sharpen my glittering sword,
my hand grasps it in judgment.
I will take vengeance on my adversaries,
and will repay those who hate me.

42 I will make my arrows drunk with blood.
My sword shall devour flesh with the blood of the slain and the captives,
from the head of the leaders of the enemy.”

43 Rejoice, you nations, with his people,
for he will avenge the blood of his servants.
He will take vengeance on his adversaries,
and will make atonement for his land and for his people.

44 Moses came and spoke all the words of this song in the ears of the people, he and Joshua the son of Nun. 45 Moses finished reciting all these words to all Israel. 46 He said to them, “Set your heart to all the words which I am testifying to you today, which you shall command your children to be careful to do, all the words of this law. 47 For it is no empty thing for you. It is your life, and through this thing you shall prolong your days in the land, where you are crossing over the Jordan to possess.”

48 The Lord spoke to Moses that same day, saying, 49 “Go up into this mountain of Abarim, to Mount Nebo, which is in the land of Moab, that is across from Jericho, and see the land of Canaan, which I am giving to the Israelites as a possession.