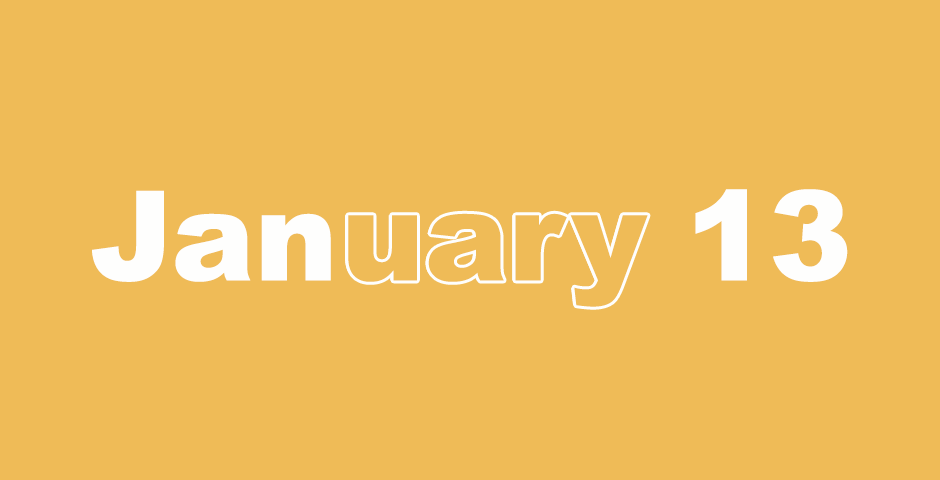 May God Almighty bless you and make you fruitful and multiply you, that you may be an assembly of peoples.  Genesis 28:3 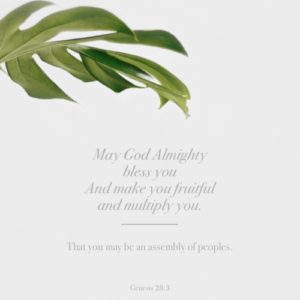 1 Isaac called Jacob, blessed him, and commanded him, “You shall not take a wife from the women of Canaan. 2 Get up, go to Paddan Aram, to the house of Bethuel your mother’s father. Take a wife from there from the women of Laban, your mother’s brother. 3 May God Almighty bless you and make you fruitful and multiply you, that you may be an assembly of peoples, 4 and give you the blessing of Abraham, to you and to your offspring with you, that you may inherit the land where you travel, which God gave to Abraham.”

5 Isaac sent Jacob away. He went to Paddan Aram to Laban, son of Bethuel the Syrian, the brother of Rebekah, Jacob’s and Esau’s mother.

6 Now Esau saw that Isaac had blessed Jacob and sent him away to Paddan Aram, to find a wife from there, and that as Isaac was blessing Jacob, he commanded him, saying, “You shall not take a wife from the women of Canaan;” 7 and he saw that Jacob obeyed his father and his mother and went to Paddan Aram.

8 Esau realized that his father, Isaac, was displeased with the Canaanite women. 9 Esau went to Ishmael and took, in addition to the wives that he had, Mahalath the daughter of Ishmael, Abraham’s son, the sister of Nebaioth, to be his wife.

10 Jacob went out from Beersheba and went toward Haran. 11 He came to a certain place, and stayed there all night, because the sun had set. He took one of the stones from the place and put it under his head and lay down in that place to sleep.

12 He dreamed and saw a stairway set upon the earth, and its top reached to heaven. The angels of God were ascending and descending on it. 13 The Lord stood above it and said, “I am the Lord, the God of Abraham your father, and the God of Isaac. I will give you the land on which you are lying, to you and to your offspring. 14 Your offspring will be like the dust of the earth, and you will spread abroad to the west, and to the east, and to the north, and to the south. Through you and through your offspring, all the families of the earth will be blessed. 15 I am with you and will keep you, wherever you go, and will bring you back into this land. For I will not leave you, until I have done that which I have spoken to you.”

16 Jacob awakened from his sleep, and he said, “Surely the Lord is in this place, and I did not know it.” 17 He was afraid and said, “How awesome this place is! This is none other than the house of God, and this is the gate of heaven.”

Jacob Commits to Give a Tenth

18 Jacob rose up early in the morning, and took the stone that he had put under his head and set it up as a pillar and poured oil on top of it. 19 He called the place Bethel,  even though the name of the city had been named Luz.

20 Jacob made a vow, saying, “If God will be with me, and will keep me in the way that I go, and will give me bread to eat, and clothing to wear, 21 so that I come back to my father’s house in peace, and the Lord will be my God, 22 then this stone, which I have set up as a pillar, will be the house of the Lord. Of all that you will give me I will surely give a tenth to you.”

They said, “We are from Haran.”

They said, “It is well. See, Rachel, his daughter, is coming with the sheep.”

7 He said, “It is still the middle of the day, not time to gather the livestock together. Water the sheep and go and feed them.”

8 They said, “We can’t, until all the flocks are gathered together, and they roll the stone from the well’s opening. Then we will water the sheep.”

9 While Jacob was still speaking with them, Rachel came with her father’s sheep, for she kept them. 10 When Jacob saw Rachel, the daughter of Laban, his mother’s brother, and the sheep of Laban, he went near and rolled the stone from the well’s opening and watered the flock of Laban his mother’s brother. 11 He kissed Rachel and raised his voice and wept. 12 He told Rachel that he was her father’s relative and that he was Rebekah’s son, and she ran and told her father.

13 When Laban heard the news of Jacob, his sister’s son, he ran to meet Jacob and embraced him and kissed him and brought him to his house. Jacob told Laban all these things.

14 Laban said to him, “Surely you are my own flesh and blood.” Jacob stayed with him for a month. 15 Laban said to Jacob, “Because you are my relative, should you therefore serve me for nothing? Tell me, what will your wages be?”

16 Laban had two daughters. The name of the elder was Leah, and the name of the younger was Rachel. 17 Leah’s eyes were tender, but Rachel was beautiful in form and attractive. 18 Jacob loved Rachel. He said, “I will serve you seven years for Rachel, your younger daughter.”

19 Laban said, “It is better that I give her to you, than that I should give her to another man. Stay with me.”

20 Jacob served seven years for Rachel. They seemed to him but a few days, for the love he had for her.

21 Jacob said to Laban, “Give me my wife that I may sleep with her, for my commitment is fulfilled.”

22 Laban gathered together all the men of the place and gave a feast. 23 In the evening, he took Leah his daughter and brought her to Jacob, and Jacob slept with her. 24 Laban gave Zilpah his servant to his daughter Leah as a servant. 25 Then morning came and behold, it was Leah! He said to Laban, “What is this you have done to me? Didn’t I serve you for Rachel? Why then have you deceived me?”

26 Laban said, “It is not the custom of this place to give the younger daughter before the firstborn. 27 Fulfill the wedding week of this one, and we will give you the other also for the service which you will provide me with for seven more years.”

28 Jacob agreed and completed Leah’s wedding week, and Laban gave Jacob his daughter, Rachel, as his wife. 29 Laban gave Bilhah, his servant, to his daughter Rachel to be her servant. 30 Jacob went in to Rachel also, and he loved Rachel more than Leah. He served Laban seven more years.

31 The Lord saw that Leah was unloved, and he opened her womb, but Rachel was barren. 32 Leah conceived and bore a son, and she named him Reuben, for she said, “Because the Lord has looked at my affliction, for now my husband will love me.”

The Healing Touch of Jesus

18 While he told these things to them, a ruler came and worshiped him, saying, “My daughter has just died, but come and lay your hand on her, and she will live.” 19 Jesus got up and followed him, as did his disciples. 20 A woman who had a discharge of blood for twelve years came behind him and touched the fringe of his garment, 21 for she thought to herself, “If I just touch his garment, I will be made well.”

22 But Jesus, turning around and seeing her, said, “Daughter, cheer up! Your faith has made you well.” And the woman was made well from that hour.

23 When Jesus came into the ruler’s house and saw the flute players, and the crowd in noisy disorder, 24 he said to them, “Make room, because the girl isn’t dead, but sleeping.” They were ridiculing him. 25 But when the crowd was put out, he entered in, took her by the hand, and the girl arose. 26 The report of this went out into all that land.

27 As Jesus passed by from there, two blind men followed him, calling out and saying, “Have mercy on us, son of David!”

28 When he had come into the house, the blind men came to him. Jesus said to them, “Do you believe that I am able to do this?”

29 Then he touched their eyes, saying, “According to your faith be it done to you.”

30 Their eyes were opened. Jesus strictly commanded them, saying, “See that no one knows about this.” 31 But they went out and spread abroad his fame in all that land.

32 As they went out, a mute man who was demon possessed was brought to him. 33 When the demon was cast out, the mute man spoke. The multitudes marveled, saying, “Nothing like this has ever been seen in Israel!”

34 But the Pharisees said, “By the prince of the demons, he casts out demons.”

The Sheep and the Harvest

35 Jesus went around all the cities and the villages, teaching in their synagogues, and preaching the Good News of the Kingdom, and healing every disease and every sickness among the people.

36 But when he saw the multitudes, he was moved with compassion for them, because they were harassed and scattered, like sheep without a shepherd. 37 Then he said to his disciples, “The harvest indeed is plentiful, but the laborers are few. 38 Pray therefore that the Lord of the harvest will send out laborers into his harvest.”

In the Lord I Take Refuge

1 In the Lord, I take refuge.
How can you say to me, “Flee like a bird to your mountain”?
2 For the wicked bend their bows.
They set their arrows on the strings,
that they may shoot in darkness at the upright in heart.

3 If the foundations are destroyed,
what can the righteous do?
4 The Lord is in his holy temple.
The Lord is on his throne in heaven.
His eyes observe.
His eyes examine the children of men.
5 The Lord examines the righteous,
but he hates the wicked and those who love violence.
6 On the wicked he will rain blazing coals,
fire, sulfur, and scorching wind shall be the portion of their cup.
7 For the Lord is righteous.
He loves righteousness.
The upright shall see his face.

11 My son, do not despise the Lord’s discipline,
neither be weary of his correction,
12 for whom the Lord loves, he corrects,
as a father reproves the son in whom he delights.