Seek the Lord and his strength. Seek his face always. 1 Chronicles 16:11

Preparations to Move the Ark to Jerusalem

3 David assembled all Israel at Jerusalem, to bring up the Ark of the Lord to its place, which he had prepared for it. 4 David gathered together the descendants of Aaron and the Levites:

11 David called for Zadok and Abiathar the priests, and for the Levites, for Uriel, Asaiah, Joel, Shemaiah, Eliel, and Amminadab, 12 and said to them, “You are the heads of the the Levite families. Sanctify yourselves, both you and your relatives, that you may bring the Ark of the Lord the God of Israel, up to the place that I have prepared for it. 13 For because you did not carry it at first, the Lord our God broke out in anger against us, because we did not seek him according to the ordinance.”

14 So the priests and the Levites sanctified themselves to bring up the Ark of the Lord, the God of Israel.

The Priests and Levites Carry the Ark

15 The Levites bore the Ark of the Lord on their shoulders with its poles, as Moses commanded according to the word of the Lord.

16 David spoke to the leaders of the Levites to appoint their relatives as singers with instruments of music: stringed instruments, harps, and cymbals, playing aloud and lifting up their voices with joy. 17 So the Levites appointed Heman the son of Joel; and from his brothers, Asaph the son of Berechiah; and from the sons of Merari, their brothers, Ethan the son of Kushaiah; 18 and with them their brothers from the second rank, Zechariah, Ben, Jaaziel, Shemiramoth, Jehiel, Unni, Eliab, Benaiah, Maaseiah, Mattithiah, Eliphelehu, Mikneiah, Obed-Edom, and Jeiel, the doorkeepers.

19 So the singers, Heman, Asaph, and Ethan, were given cymbals of bronze to play aloud; 20 and Zechariah, Aziel, Shemiramoth, Jehiel, Unni, Eliab, Maaseiah, and Benaiah, with stringed instruments set to Alamoth; 21 and Mattithiah, Eliphelehu, Mikneiah, Obed-Edom, Jeiel, and Azaziah, with harps tuned to the eight-stringed lyre, to lead. 22 Chenaniah, chief of the Levites, was over the singing. He taught the singers, because he was skillful.

Moving the Ark to Jerusalem

28 Thus all Israel brought the Ark of the Lord’s covenant up with shouting, with the sound of the cornet, with trumpets, and with cymbals, playing aloud with stringed instruments and harps.

29 As the Ark of Lord’s covenant came to the City of David, Michal the daughter of Saul looked out at the window, and saw king David dancing and playing, and she despised him in her heart.

A Tent for the Ark

1 They brought in the Ark of the Lord and set it in the middle of the tent that David had pitched for it, and they offered burnt offerings and peace offerings before the Lord. 2 When David had finished offering the burnt offering and the peace offerings, he blessed the people in the name of the Lord. 3 He gave to every Israelite, both man and woman, to everyone, a loaf of bread, a date cake, and a cake of raisins.

4 He appointed some of the Levites to minister before the Ark of the Lord, and to commemorate, to thank, and to praise the Lord, the God of Israel: 5 Asaph the chief, and second to him Zechariah, then Jeiel, Shemiramoth, Jehiel, Mattithiah, Eliab, Benaiah, Obed-Edom, and Jeiel, with stringed instruments and with harps; and Asaph with cymbals, playing aloud, 6 with Benaiah and Jahaziel the priests with trumpets continually, before the Ark of the Covenant of the Lord.

7 Then on that day, David first ordained to give thanks to the Lord, by the hand of Asaph and his brothers.

8 Oh give thanks to the Lord.
Call on his name.
Make what he has done known among the peoples.
9 Sing to him.
Sing praises to him.
Tell of all his marvelous works. 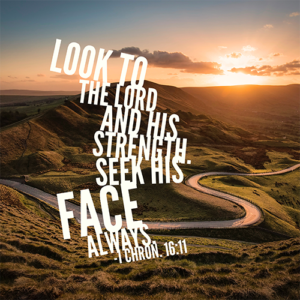 10 Glory in his holy name.
Let the heart of those who seek the Lord rejoice.
11 Seek the Lord and his strength.
Seek his face always.
12 Remember the marvelous works he has done,
his wonders, and the judgments he pronounced,
13 you offspring of Israel his servant,
you children of Jacob, his chosen ones.

14 He is the Lord our God.
His judgments are throughout all the earth.
15 Remember his covenant forever,
the word which he commanded to a thousand generations,
16 the covenant which he made with Abraham,
his oath to Isaac.
17 He confirmed it to Jacob as a statute,
and to Israel as an everlasting covenant,
18 saying, “I will give you the land of Canaan,
The lot of your inheritance.”

19 When they were but a few in number,
yes, very few, and foreigners were in it,
20 they wandered from nation to nation,
from one kingdom to another people.
21 He allowed no man to do them wrong.
Yes, he reproved kings for their sake,
22 “Do not touch my anointed ones!
Do my prophets no harm!”

23 Sing to the Lord, all the earth!
Display his salvation from day to day.
24 Declare his glory among the nations,
and his marvelous works among all the peoples.
25 For great is the Lord, and greatly to be praised.
He also is to be feared above all gods.
26 For all the gods of the peoples are idols,
but the Lord made the heavens.
27 Honor and majesty are before him.
Strength and gladness are in his place.

31 Let the heavens be glad,
and let the earth rejoice!
Let them say among the nations, “The Lord reigns!”
32 Let the sea roar, and its fullness!
Let the field exult, and all that is in it!
33 Then the trees of the forest will sing for joy before the Lord,
for he comes to judge the earth.

34 Oh give thanks to the Lord, for he is good,
for his loving kindness endures forever.
35 Say, “Save us, God of our salvation!
Gather us together and deliver us from the nations,
to give thanks to your holy name,
to triumph in your praise.”

36 Blessed be the Lord, the God of Israel,
from everlasting to everlasting.

All the people said, “Amen,” and praised the Lord.

Worship Before the Ark

37 So he left Asaph and his relatives there before the Ark of the Lord’s covenant, to minister before the Ark continually, as every day’s work required, 38 and Obed-Edom with 68 relatives, Obed-Edom also the son of Jeduthun and Hosah to be doorkeepers.

39 Zadok the priest, and his relatives (the priests) were appointed to serve before the tabernacle of the Lord in the high place that was at Gibeon, 40 to offer burnt offerings to the Lord on the altar of burnt offering continually morning and evening, according to all that is written in the Law of the Lord, which he commanded to Israel, 41 and with them Heman and Jeduthun, and the rest who were chosen, who were mentioned by name, to give thanks to the Lord, because his loving kindness endures forever.

42 And with them Heman and Jeduthun with trumpets and cymbals for those that should play aloud, and with instruments for the songs of the Lord, and the sons of Jeduthun to be at the gate.

43 All the people departed, each man to his house, and David returned to bless his house.

I am Not Ashamed of the Gospel

16 I am not ashamed of the gospel of Christ, because it is the power of God for salvation for everyone who believes, for the Jew first, and also for the Gentile. 17 For in it the righteousness of God is revealed, from faith to faith, as it is written, “But the righteous shall live by faith.”

18 For the wrath of God is revealed from heaven against all ungodliness and unrighteousness of men who, in wickedness, suppress the truth, 19 because that which may be known of God is manifest in them, for God has revealed it to them. 20 For since the creation of the world, the invisible things of God; his everlasting power and divinity, can be clearly seen, being perceived through the things that are made. Therefore, they have no excuse.

21 They knew God but did not glorify him as God and did not give thanks, but in their useless reasoning, their hearts, lacking understanding, were darkened.

22 Professing themselves to be wise, they became fools, 23 and traded the glory of the incorruptible God for the likeness of an image of corruptible man, and of birds, four-footed animals, and creeping things.

24 Therefore God gave them over, in the lusts of their hearts, to impurity, to dishonor their own bodies among themselves. 25 They exchanged the truth of God for a lie, and worshiped and served the creature rather than the Creator, who is blessed forever. Amen.

26 For this reason, God gave them up to vile passions. For their women exchanged the natural function for that which is against nature. 27 Likewise, the men also, leaving the natural function of the woman, burned in their lust toward one another, men doing what is inappropriate with men, and receiving in themselves the due penalty of their error.

28 Because they did not see fit to acknowledge God, He gave them over to a depraved mind, to do those things which are not fitting, 29 being filled with all unrighteousness, sexual immorality, wickedness, covetousness, malice; full of envy, murder, strife, deceit, evil habits, secret slanderers, 30 backbiters, hateful to God, insolent, arrogant, boastful, inventors of evil things, disobedient to parents, 31 without understanding, covenant breakers, without natural affection, unforgiving, unmerciful; 32 who, knowing the ordinance of God, that those who practice such things are worthy of death, not only do the same, but also approve of those who practice them.

1 Why do you stand far off, O Lord?
Why do you hide yourself in times of trouble?
2 In arrogance, the wicked hunt down the weak.
They are caught in the schemes that they devise.

3 For the wicked boasts of his heart’s cravings.
He blesses the greedy and disdains the Lord.
4 The wicked, in his pride,
has no room in his thoughts for God.
5 His ways are prosperous at all times.
He is arrogant, and your laws are far from his sight.
As for all his adversaries, he sneers at them.
6 He says in his heart, “I shall not be shaken.
For generations I shall have had no trouble.”

12 Arise, O Lord!
God, lift up your hand!
Do not forget the helpless.
13 Why does the wicked person condemn God,
and say in his heart, “God won’t call me into account?”
14 But you do see trouble and grief.
You consider it to take it into your hand.
You help the victim and the fatherless.
15 Break the arm of the wicked.
As for the evil man, seek out his wickedness until you find none.

6 Many will entreat the favor of a ruler,
and everyone is a friend to a man who gives gifts.
7 All the relatives of the poor shun him:
how much more do his friends avoid him!
He pursues them with pleas, but they are gone.