But now we have been discharged from the law, having died to that in which we were held, so that we serve in newness of the spirit, and not in oldness of the letter. Romans 7:6

The Bronze Altar and Molten Sea

3 Under the rim were figures of oxen, which encircled it, ten every foot and a half encircled the Sea. The oxen were in two rows, cast when the Sea was cast.

The Ten Lavers, Candlesticks, and Tables

6 He also made ten basins and put five on the right side and five on the left, to wash in them. The things that belonged to the burnt offering were washed in them, but the Sea was for the priests to wash in.

9 Furthermore he made the court of the priests, the great court, and doors for the court, and overlaid their doors with bronze. 10 He set the Sea on the right side of the house eastward, toward the south.

The Instruments of Brass

16 Huram his father also made the pots, the shovels, the forks, and all its vessels for king Solomon, for the house of the Lord, of bright bronze. 17 The king cast them in the plain of the Jordan, in the clay ground between Succoth and Zeredah.

18 Thus Solomon made all these vessels in great abundance; for the weight of the bronze could not be determined.

The Instruments of Gold

19 Solomon made all the vessels that were in the house of the Lord, the golden altar also and the tables with the show bread on them; 20 and the lamp stands with their lamps, to burn according to the ordinance before the inner sanctuary, of pure gold; 21 and the flowers, the lamps, and the tongs of gold that was perfect gold; 22 and the snuffers, the basins, the spoons, and the fire pans of pure gold. As for the entry of the house, its inner doors for the most holy place and the doors of the main hall of the temple were of gold.

The Ark Enters the Temple

2 Then Solomon assembled the elders of Israel and all the heads of the tribes, the leaders of the Israelite tribes, to Jerusalem, to bring up the Ark of the Lord’s covenant out of the City of David, which is Zion. 3 So all the men of Israel assembled themselves to the king at the feast, which was in the seventh month.

4 All the elders of Israel came. The Levites took up the Ark, 5 and they brought up the ark, the Tent of Meeting, and all the holy vessels that were in the Tent. These the Levitical priests brought up.

6 King Solomon and all the congregation of Israel, who were assembled to him, were before the Ark, sacrificing sheep and cattle that, in their multitude, could not be counted or numbered.

7 The priests brought in the Ark of the Lord’s covenant to its place, into the inner sanctuary of the house, to the most holy place, under the wings of the cherubim. 8 For the cherubim spread out their wings over the place of the Ark, and the cherubim covered the Ark and its poles.

9 The poles were so long that the ends of the poles were seen from the ark in front of the inner sanctuary, but they were not seen outside, and it is there to this day.

10 There was nothing in the Ark except the two tablets which Moses put at Horeb, when the Lord made a covenant with the Israelites when they came out of Egypt.

11 The priests had come out of the holy place. All the priests who were present had sanctified themselves irrespective of their divisions. 12 The Levites also, who were the singers, all of them; Asaph, Heman, Jeduthun, and their sons and their brothers, arrayed in fine linen, with cymbals and stringed instruments and harps, stood at the east end of the altar and with them 120 priests sounding with trumpets). 13 The trumpeters and singers played together to praise the Lord with one voice, to make one sound heard in praising and thanking the Lord, and they raised their voice with the trumpets and cymbals and instruments of music, and praised the Lord, saying,

“For he is good;
for his loving kindness endures forever!” 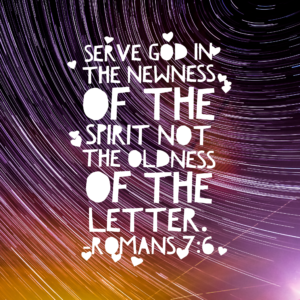 Released from the Law

4 Therefore, my brothers, you also were made dead to the law through the body of Christ, that you would be joined to another, to him who was raised from the dead, that we might produce fruit to God. 5 For when we were in the flesh, the sinful passions worked in us, by the law, to bring out fruit to death. 6 But now we have been discharged from the law, having died to that in which we were held, so that we serve in newness of the spirit, and not in oldness of the letter.

9 I was alive apart from the law once, but when the commandment came, sin revived, and I died. 10 The commandment which was for life, this I found to be for death; 11 for sin, finding occasion through the commandment, deceived me, and through it killed me. 12 Therefore the law indeed is holy, and the commandment holy, and righteous, and good.

1 Hear me, Lord, my righteous plea.
Give ear to my prayer, that does not go out from deceitful lips.
2 Let my sentence come out of your presence.
Let your eyes look on equity.

3 You have proved my heart.
You have visited me in the night.
You have tried me, and found nothing.
I have resolved that my mouth shall not disobey.
4 As for the deeds of men, by the word of your lips,
I have kept myself from the ways of the violent.
5 My steps have held fast to your paths.
My feet have not slipped.

6 I have called on you, for you will answer me, my God.
Turn your ear to me.
Hear my speech.
7 Show your marvelous loving kindness,
you who save those who take refuge by your right hand from their enemies.
8 Keep me as the apple of your eye.
Hide me under the shadow of your wings,
9 from the wicked who oppress me,
my deadly enemies, who surround me.

10 They close up their callous hearts.
With their mouth they speak proudly.
11 They have now surrounded us in our steps.
They set their eyes to cast us down to the earth.
12 He is like a lion that is greedy of his prey,
as it were a young lion lurking in secret places.

13 Arise, Lord, confront him.
Cast him down.
Deliver my soul from the wicked by your sword;
14 from men by your hand, Lord,
from men of the world, whose portion is in this life.
You fill the belly of your cherished ones.
Your sons have plenty,
and they store up wealth for their children.

15 As for me, I shall see your face in righteousness.
I shall be satisfied, when I awake, with seeing your form.

22 That which makes a man to be desired is his kindness.
A poor man is better than a liar.
23 The fear of the Lord leads to life, then contentment.
He rests and will not be touched by trouble.