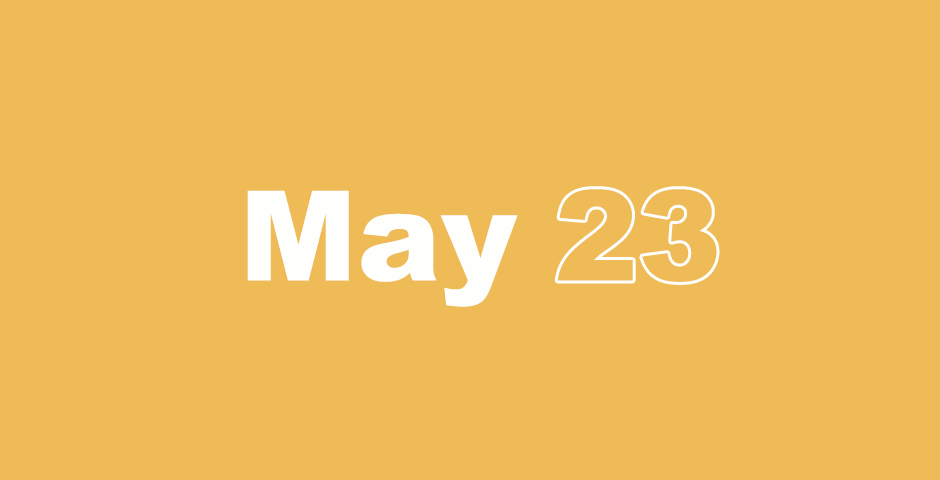 If you know these things, blessed are you if you do them. John 13:17

The House of David Strengthened

2 Sons were born to David in Hebron. His firstborn was Amnon, of Ahinoam the Jezreelitess; 3 and his second, Chileab, of Abigail the wife of Nabal the Carmelite; and the third, Absalom the son of Maacah the daughter of Talmai king of Geshur; 4 and the fourth, Adonijah the son of Haggith; and the fifth, Shephatiah the son of Abital; 5 and the sixth, Ithream, of Eglah, David’s wife. These were born to David in Hebron.

8 Then Abner was very angry about Ishbosheth’s words, and said, “Am I a dog’s head that belongs to Judah? To this very day I have shown kindness to the house of Saul, your father, to his brothers, and to his friends, and have not delivered you into the hand of David; and yet you charge me today with a fault concerning this woman! 9 The Lord do so to Abner, and more also, if I do not do for David as the Lord has sworn to him, 10 to transfer the kingdom from Saul’s house, and to set up David’s throne over Israel and over Judah, from Dan to Beersheba.”

11 He could not answer Abner another word, because he was afraid of him.

12 Abner sent messengers to David on his behalf, saying, “Whose is the land?” and saying, “Make your alliance with me, and my hand will be with you, to bring all Israel around to you.”

13 He said, “Good. I will make a treaty with you, but one thing I require of you. That is, you will not see my face unless you first bring Michal, Saul’s daughter, when you come to see me.”

14 David sent messengers to Ishbosheth, Saul’s son, saying, “Deliver my wife, Michal, to me, whom I was given to marry for 100 Philistine foreskins.”

15 Ishbosheth sent for her and took her from her husband, from Paltiel the son of Laish. 16 Her husband went with her, weeping as he went, and followed her to Bahurim. Then Abner said to him, “Go! Return!” and he returned. 17 Abner had communication with the elders of Israel, saying, “In times past, you sought for David to be king over you. 18 Now then do it, for the Lord has spoken of David, saying, ‘By the hand of my servant David, I will save my people Israel out of the hand of the Philistines, and out of the hand of all their enemies.’ ”

19 Abner also spoke in the ears of Benjamin, and Abner went also to speak in the ears of David in Hebron all that seemed good to Israel, and to the whole house of Benjamin. 20 So Abner came to David to Hebron, and twenty men with him. David gave a feast for Abner and the men who were with him. 21 Abner said to David, “I will arise and go, and will gather all Israel to my lord the king, that they may make a covenant with you, and that you may reign over all that your heart desires.” David sent Abner away, and he went in peace.

24 Then Joab came to the king, and said, “What have you done? Abner came to you. Why is it that you have sent him away, and he is already gone? 25 You know Abner the son of Ner. He came to deceive you, and to know when you come and go, and to know everything that you are doing.”

26 When Joab had come out from David, he sent messengers after Abner, and they brought him back from the well of Sirah, but David was not aware of it. 27 When Abner had returned to Hebron, Joab took him aside into the middle of the gate to speak with him quietly, and struck him there in the stomach, so that he died, for the blood of Asahel his brother. 28 Afterward, when David heard it, he said, “I and my kingdom are without guilt before the Lord forever for the blood of Abner the son of Ner. 29 Let it fall on the head of Joab, and on all his father’s house. Let there not fail from the house of Joab to have one who has a discharge, or who is a leper, or who leans on a staff, or who falls by the sword, or who lacks bread.” 30 So Joab and Abishai his brother killed Abner, because he had killed their brother Asahel at Gibeon in the battle.

31 David said to Joab, and to all the people who were with him, “Tear your clothes, and clothe yourselves with sackcloth, and mourn in front of Abner.” King David followed the bier. 32 They buried Abner in Hebron. The king raised his voice and wept at Abner’s grave, and all the people wept.

33 The king lamented for Abner and said, “Should Abner die as a fool dies? 34 Your hands weren’t bound, and your feet weren’t put into fetters. As a man falls before the children of iniquity, so you fell.”  All the people wept again over him.

35 All the people came to urge David to eat bread while it was yet day, but David swore, saying, “God do so to me, and more also, if I taste bread, or anything else, until the sun goes down.”

36 All the people took notice of it, and it pleased them, as whatever the king did pleased all the people. 37 So all the people and all Israel understood that day that it was not of the king to kill Abner the son of Ner. 38 The king said to his servants, “Don’t you know that a ruler and a great man has fallen today in Israel? 39 I am weak today, though anointed king. These men, the sons of Zeruiah are too hard for me. May the Lord pay back the evildoer according to his wickedness.”

1 Now before the feast of the Passover, Jesus, knew that his time had come that he would depart from this world to the Father. Having loved his own who were in the world, he loved them to the end. 2 During supper, the devil having already put into the heart of Judas Iscariot, Simon’s son, to betray him, 3 Jesus, knew that the Father had given all things into his hands, and that he came from God, and was going to God. 4 He arose from supper, and laid aside his outer garments. He took a towel and wrapped a towel around his waist.

5 Then he poured water into the basin, and began to wash the disciples’ feet and to wipe them with the towel that was wrapped around him. 6 Then he came to Simon Peter. He said to him, “Lord, do you wash my feet?”

7 Jesus answered him, “You do not know what I am doing now, but you will understand later.”

8 Peter said to him, “You will never wash my feet!”
Jesus answered him, “If I do not wash you, you have no part with me.”

9 Simon Peter said to him, “Lord, not my feet only, but also my hands and my head!” 10 Jesus said to him, “Someone who has bathed only needs to have his feet washed, but is completely clean. You are clean, but not all of you.” 11 For he knew him who would betray him, this is why he said, “You are not all clean.” 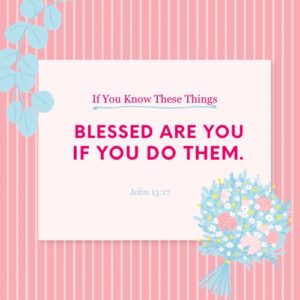 12 So when he had washed their feet, put his outer garment back on, and sat down again, he said to them, “Do you know what I have done to you? 13  You call me, ‘Teacher’ and ‘Lord.’ You say so correctly, for so I am. 14  If I then, the Lord and the Teacher, have washed your feet, you also ought to wash one another’s feet. 15  For I have given you an example, that you should also do as I have done to you. 16  Most certainly I tell you, a servant is not greater than his master, neither is one who is sent greater than he who sent him. 17  If you know these things, blessed are you if you do them.

18  I do not speak concerning all of you. I know whom I have chosen, but that the Scripture may be fulfilled, ‘He who eats bread with me has lifted up his heel against me.’  19  From now on, I am telling you before it happens, so that when it happens, you may believe that I am he. 20  Most certainly I tell you, he who receives whomever I send, receives me; and he who receives me, receives him who sent me.”

21 When Jesus had said this, he was troubled in spirit, and testified, “Most certainly I tell you that one of you will betray me.”

22 The disciples looked at one another, perplexed about whom he spoke. 23 One of his disciples, whom Jesus loved, was at the table, leaning against Jesus’ chest. 24 Simon Peter therefore beckoned to him, and said to him, “Tell us who it is of whom he speaks.”

Then Jesus said to him, “What you are doing, do quickly.”

28 Now nobody at the table knew why he said this to him. 29 For some thought, because Judas had the money box, that Jesus said to him, “Buy what things we need for the feast,” or that he should give something to the poor. 30 Therefore having received that morsel, he went out immediately. It was night.

ALEPH
1 Blessed are those whose ways are blameless,
who walk according to the law of the Lord.
2 Blessed are those who keep his statutes,
who seek him with their whole heart.
3 Yes, they do nothing wrong.
They walk in his ways.
4 You have commanded your precepts,
that we should fully obey them.

5 Oh that my ways were steadfast
to obey your statutes!
6 Then I would not be disappointed,
when I consider all of your commandments.
7 I will give thanks to you with uprightness of heart,
when I learn your righteous judgments.
8 I will observe your statutes.
Do not utterly forsake me.

BET
9 How can a young man keep his way pure?
By living according to your word.
10 With my whole heart, I have sought you.
Do not let me wander from your commandments.
11 I have hidden your word in my heart,
that I might not sin against you.

12 Blessed are you, O Lord.
Teach me your statutes.
13 With my lips,
I have declared all the ordinances of your mouth.
14 I have rejoiced in the way of your testimonies,
as much as in all riches.
15 I will meditate on your precepts,
and consider your ways.
16 I will delight myself in your statutes.
I will not forget your word.

29 The Lord is far from the wicked,
but he hears the prayer of the righteous.
30 The light of the eyes rejoices the heart.
Good news gives health to the bones.