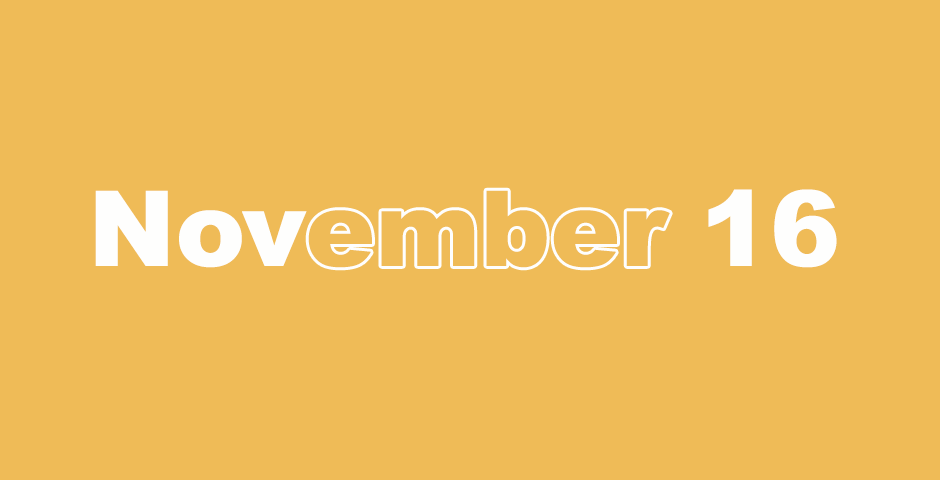 For the Lord God says: “I, indeed I myself will search for my sheep and will seek them out.” Ezekiel 34:11

1 The word of the Lord came to me, saying, 2 “Son of man, speak to your people, and tell them, ‘When I bring the sword on a land, and the people of the land choose a man from among them and set him up as their watchman. 3 If, when he sees the sword come on the land, he blows the trumpet and warns the people, 4 then whoever hears the sound of the trumpet and does not heed the warning, if the sword comes and takes him away, his blood will be on his own head. 5 He heard the sound of the trumpet and did not heed the warning. His blood will be on his own head. Whereas, if he had heeded the warning, he would have delivered himself.

6 But if the watchman sees the sword coming and does not blow the trumpet, and the people are not warned, and the sword comes and takes the life of anyone among them, he is taken away because of his iniquity, but his blood I will require at the hands of the watchman.’

The Message of the Watchman

10 “You, son of man, tell the house of Israel, say this, ‘Our transgressions and our sins are on us, and we pine away in them. How then can we live?’” 11 Tell them, ‘As I live,” says the Lord God, ‘I have no pleasure in the death of the wicked but desire that the wicked turn from his ways and live. Turn, turn from your evil ways! For why should you die, house of Israel'”

13 When I tell the righteous that he will surely live, if he trusts in his righteousness, and commits sin, none of his righteous deeds will be remembered, but he will die in the sin that he has committed. 14 Again, when I say to the wicked, “You will surely die,” if he turns from his sin, and does that which is lawful and right, 15 if the wicked restores his pledge, giving back that which he had taken in robbery, walks in the statutes of life, committing no iniquity, he will surely live. He will not die. 16 None of the sins that he has committed will be remembered against him. He has done that which is lawful and right. He will surely live.

17 “ ‘Yet your people say, “The way of the Lord is not fair,” but as for them, their way is not fair. 18 When the righteous turns from his righteousness, and commits sin, he will die in that sin. 19 When the wicked turns from his wickedness, and does that which is lawful and right, he will live because of it. 20 Yet you say, “The ways of the Lord are not fair.” House of Israel, I will judge you individually according to each of your ways.’ ”

21 On the fifth day of the tenth month, in the twelfth year of our exile, someone who had escaped from Jerusalem came to me, saying, “The city has been defeated!” 22 Now the hand of the Lord had been on me the evening before the escapee had come, and the Lord opened my mouth, so when the escapee came to me in the morning, my mouth was opened, and I was no longer mute.

23 The word of the Lord came to me, saying, 24 “Son of man, the inhabitants of the ruins of the land of Israel are speaking out, saying, ‘Abraham was one, yet he inherited the land. We are many. The land has been given to us as an inheritance.’

27 “You shall tell them, ‘The Lord God say, “As I live, surely those who are in the ruins will fall by the sword. I will give those in the open field to be devoured by animals, and those who are in the strongholds and in the caves will die from disease. 28 I will make the land an appalling desolation. The pride of her power will cease. The mountains of Israel will be desolate so that no one will pass through. 29 Then they will know that I am the Lord, when I have made the land an appalling desolation because of all the abominations which they have committed.” ’

30 “As for you, son of man, your people talk about you by the walls and at the doors of their homes, speaking to one another, everyone saying to his brother, ‘Please come and hear the word that comes from the Lord.’

31 They come to you as usual, and they sit before you as my people, and they hear your words, but do not do them, for with their mouths they show much love, but their hearts seek selfish gain. 32 You are like a singer with a great voice, singing a lovely song to them, playing well on an instrument, for they hear your words, but they do not do them.

33 “When this comes to pass—and it is coming—then they will know that a prophet has been among them.”

10 The Lord God says: “I am against the shepherds. I will hold them responsible for my sheep in their hands and cause them to stop feeding the sheep. The shepherds will not feed themselves any more. I will deliver my sheep from their mouth that they may not be food for them.” 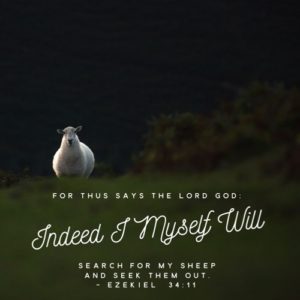 11 “ ‘For the Lord God says, “I, indeed I myself will search for my sheep and will seek them out. 12 As a shepherd seeks out his flock when he is among his sheep that are scattered abroad, so I will seek out my sheep. I will deliver them out of all the places where they have been scattered in cloudy and dark days.

20 “Therefore the Lord God says to them, ‘I, indeed I, will judge between the fat sheep and the lean sheep. 21 Because you thrust with side and with shoulder and butted all the diseased with your horns, until you have scattered them abroad, 22 therefore I will save my flock, and they will no longer be a prey. I will judge between one sheep and another. 23 I will set up one shepherd over them, and he will feed them, my servant David. He will feed them, and he will be their shepherd. 24 I, the Lord, will be their God, and my servant David prince among them. I, the Lord, have spoken it.

The Covenant of Peace

25 “ ‘I will make with them a covenant of peace and will drive dangerous animals out of the land. They will dwell securely in the wilderness and sleep in the woods. 26 I will make them and the places around my hill a blessing. I will cause the showers to come down in their season. There will be showers of blessing.

27 The tree of the field will yield its fruit, and the earth will yield its increase, and they will be secure in their land. Then they will know that I am the Lord, when I have broken the bars of their yoke and have delivered them out of the hand of those who made slaves of them.

28 They will no longer be prey to the nations, nor will the animals of the earth devour them, but they will dwell securely, and no one will make them afraid. 29 I will raise up for them a plantation of renown, and they will no longer be consumed with famine in the land, nor bear the shame of the nations any more. 30 They will know that I, the Lord, their God am with them, and that they, the house of Israel, are my people, says the Lord God. 31 You my sheep, the sheep of my pasture, are men, and I am your God,’ says the Lord God.”

1 Let brotherly love continue. 2 Do not forget to show hospitality to strangers, for in doing so, some have entertained angels without knowing it. 3 Remember those who are in chains, as one bound with them, and those who are mistreated, since you are also in the body. 4 Let marriage be held in honor among all, and let the bed be undefiled, but God will judge the sexually immoral and adulterers.

Jesus Christ is the Same

5 Be free from the love of money, and be content with the things you have, for he has said,

“I will in no way leave you,
neither will I in any way forsake you.” a

6 So that with good courage we say,

7 Remember your leaders, men who spoke the word of God to you, and considering the results of their conduct, imitate their faith. 8 Jesus Christ is the same yesterday, today, and forever. 9 Do not be taken by various and strange teachings, for it is good that the heart be established by grace, not by food, through which those who were so occupied were not benefited.

10 We have an altar from which those who serve the holy tabernacle have no right to eat. 11 For the bodies of those animals, whose blood is brought into the holy place by the high priest as an offering for sin, are burned outside of the camp. 12 Therefore Jesus also, that he might sanctify the people through his own blood, suffered outside of the gate. 13 Let us therefore go out to him outside of the camp, bearing his reproach. 14 For we do not have here an enduring city, but we seek that which is to come.

15 Through Jesus, then, let us offer up a sacrifice of praise to God continually, that is, the fruit of lips which proclaim allegiance to his name. 16 But do not forget to be doing good and sharing, for with such sacrifices God is well pleased.

17 Obey your leaders and submit to them, for they watch on behalf of your souls, as those who will give account, that they may do this with joy, and not with groaning, for that would be unprofitable for you.

18 Pray for us, for we are persuaded that we have a good conscience, desiring to live honorably in all things. 19 I strongly urge you to do this, that I may be restored to you sooner.

20 Now may the God of peace, who brought back from the dead the great shepherd of the sheep with the blood of an eternal covenant, our Lord Jesus, 21 make you complete in every good work to do his will, working in you that which is well pleasing in his sight, through Jesus Christ, to whom be the glory forever and ever. Amen.

22 But I exhort you, brothers, endure the word of exhortation, for I have written to you in few words. 23 Know that our brother Timothy has been freed, with whom, if he comes shortly, I will see you.

24 Greet all of your leaders and all the saints. The Italians greet you.

To Your Name Give Glory

1 Not to us, Lord, not to us,
but to your name give glory,
for your loving kindness,
and for your truth’s sake.
2 Why should the nations say,
“Where is their God, now?”
3 But our God is in the heavens.
He does whatever he pleases.

14 May the Lord increase you more and more,
you and your children.
15 Blessed are you by the Lord,
who made heaven and earth.

16 The heavens are the Lord’s heavens,
but he has given the earth to the children of men.
17 The dead do not praise the Lord,
neither any who go down into silence;
18 but we will bless the Lord,
from this time forward and forever more.

21 The crucible is for silver,
and the furnace for gold;
but man is refined by his praise.
22 Though you grind a fool in a mortar with a pestle along with grain,
yet his foolishness will not be removed from him.