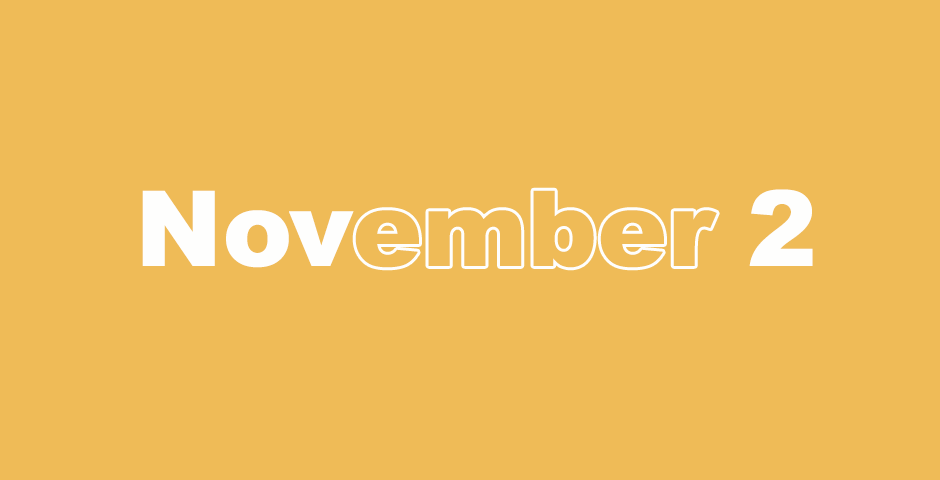 You send out your Spirit, and they are created,
and you renew the face of the earth. Psalm 104:30

The Siege of Jerusalem Predicted

1 “You also, son of man, take a brick, and lay it in front of you, and draw the city of Jerusalem on it. 2 Lay siege against it, and build a siege wall and siege ramps against it. Also set camps against it and plant battering rams against it on every side. 3 Take for yourself an iron plate and set it up as a wall of iron between you and the city. Then set your face toward it. It will be besieged, and you shall lay siege against it. This shall be a sign to the house of Israel.

6 “Again, when you have completed this, you shall lie on your right side, and shall bear the iniquity of the house of Judah. I have appointed 40 days, each day represents a year to you. 7 You shall set your face toward the siege of Jerusalem, with your arm uncovered, and you shall prophesy against it. 8 I will put ropes on you, and you shall not turn yourself from one side to the other, until you have completed the days of your siege.

13 The Lord said, “Thus will the Israelites eat their bread, unclean, among the nations where I will drive them.”

14 Then I said, “O Lord God! I have never been defiled, for from my youth up until now I have not eaten of that which dies of itself, or is torn by animals. No unclean meat has come into my mouth.

15 Then he said to me, “I have given you cow’s excrement instead of man’s excrement, and you shall prepare your bread on it.”

16 Moreover he said to me, “Son of man, I will break the staff of bread in Jerusalem. They will eat bread by weight, and with fearfulness. They will drink water by measure, and in despair. 17 So they will lack bread and water, and they will look at one another in despair, and they will waste away for their iniquity.

1 “You, son of man, take a sharp sword. You shall use it like a barber’s razor on yourself and shall shave your head and your beard. Then take balances to weigh and divide the hair. 2 A third of it, you shall burn in the fire in the middle of the city, when the days of the siege are fulfilled. You shall take a third of it, and strike with the sword around it. A third of it you shall scatter to the wind, and I will draw out a sword after them.

3 You shall take a few pieces of it and bind them in the folds of your robe. 4 Of these, you shall take them again and cast them into the middle of the fire, and burn them in the fire. From it a fire will come out into the whole house of Israel.

5 “The Lord God says: ‘This is Jerusalem. I have set her in the midst of the nations, and countries are around her. 6 She has rebelled against my ordinances, in wickedness surpassing the nations, and against my statutes more than the countries that are around her, for they have rejected my ordinances, and as for my statutes, they have not walked in them.’

7 “Therefore the Lord God says: ‘Because you are more turbulent than the nations that are around you, and have not walked in my statutes, nor have kept my ordinances, nor followed the ordinances of the nations that are around you; 8 therefore the Lord God says: ‘I, yes I, am against you, and I will execute judgments among you in the sight of the nations. 9 I will do among you that which I have never done, and which I will never do anything like it again, because of all your abominations. 10 Therefore the fathers will eat the sons within Jerusalem, and the sons will eat their fathers. I will execute judgments on you; and I will scatter to the winds, all your survivors.

11 Therefore as surely as I live,’ says the Lord God, ‘because you have defiled my sanctuary with all your detestable things, and with all your abominations, therefore I will cut you off. I will not spare you, and I will have no pity.

13 “ ‘Thus my anger will be spent, and I will cause my wrath toward them to rest, and I will be comforted. They will know that I, the Lord, have spoken in my zeal, when my fury on them has been spent.

14 “ ‘Moreover I will make you a desolation and a reproach among the nations that are around you, in the sight of all who pass by. 15 So it will be a reproach and a taunt, a lesson and a horror to the nations surrounding you, when I execute judgments on you in anger and in wrath, with furious rebuke—I, the Lord, have spoken it— 16 when I send on them the deadly arrows of famine that are intended for destruction, which I will send to destroy you. I will make your famine more severe and will cut off your food supply.  17 I will send on you famine and dangerous animals, and they will leave you without children. Disease and bloodshed will pass through you. I will bring the sword on you. I, the Lord, have spoken it.’ ”

1 The word of the Lord came to me, saying, 2 “Son of man, set your face toward the mountains of Israel, and prophesy against them.

3 Say to them, ‘You mountains of Israel, hear the word of the Lord God! The Lord God says to the mountains and to the hills, to the watercourses and to the valleys, “I, yes I, will bring a sword on you, and I will destroy your high places. 4 Your altars will become desolate, and your incense altars will be broken. I will cast down your slain men before your idols. 5 I will lay the dead bodies of the Israelites before their idols. I will scatter your bones around your altars. 6 In all your dwelling places, the cities will be laid waste and the high places will be desolate, that your altars may be laid waste and made desolate, and your idols may be broken and cease, and your incense altars may be cut down, and your works may be abolished. 7 The slain will fall among you, and you will know that I am the Lord.

A Remnant Shall be Blessed

8 “ ‘ “Yet I will leave a remnant, in that you will have some that escape the sword among the nations when you are scattered through the countries.

9 Those of you that escape will remember me among the nations where they are taken captive, how I have been heartbroken by their adulterous hearts, which departed from me, and with their eyes, which lusted for their idols. Then they will loathe themselves in their own sight for the evil which they have done in all their abominations. 10 They will know that I am God. I have not said in vain that I would bring this disaster on them.” ’

11 “The Lord God says: ‘Strike with your hand, and stamp with your foot, and cry out because of all the evil abominations of the house of Israel, for they will fall by the sword, by famine, and by pestilence. 12 He who is far off will die of the pestilence. He who is near will fall by the sword. He who remains and is besieged will die by famine. Thus I will accomplish my wrath on them.

13 You will know that I am the Lord, when their slain men are among their idols around their altars, on every high hill, on all the tops of the mountains, under every green tree, and under every thick oak, the places where they offered pleasant aroma to all their idols. 14 I will stretch out my hand on them, and make the land desolate and waste, from the wilderness toward Diblah, throughout all their habitations. Then they will know that I am the Lord.’ ”

A Sabbath-Rest for God’s People

1 Therefore, while a promise of entering his rest remains, let us fear lest any of you should seem to have fallen short of it. 2 For indeed we also have received the good news just as they did, but the word they heard did not profit them because they were not united by faith with those who heard it.

3 For we who have believed do enter into that rest, just as he has said,

“As I swore in my wrath, they will not enter into my rest.” a

And yet his works have been finished since the foundation of the world. 4 For he has said this somewhere about the seventh day,

“God rested on the seventh day from all his works.” b

5 And again in that passage,

“They will not enter into my rest.”

6 Seeing therefore it remains that some should enter into it, and they to whom the good news was preached before, failed to enter in because of disobedience, 7 he again defines a certain day, today, saying through David so long a time afterward (just as has been said),

“Today if you will hear his voice,
do not harden your hearts.” c

8 For if Joshua had given them rest, he would not have spoken afterward of another day. 9 There remains therefore a Sabbath rest for the people of God. 10 For he who has entered into his rest has himself also rested from his works, as God did from his. 11 Let us therefore be diligent to enter into that rest, lest anyone fall after the same example of disobedience.

The Word of God is Living and Active

12 For the word of God is living and active, and sharper than any two-edged sword, piercing even to the dividing of soul and spirit, of both joints and marrow, and is able to discern the thoughts and intentions of the heart. 13 There is no creature that is hidden from his sight, but all things are naked and laid open before the eyes of him to whom we must give an account.

Jesus is the Great High Priest

14 Having then a great high priest who has passed through the heavens, Jesus, the Son of God, let us hold tightly to our confession. 15 For we do not have a high priest who cannot sympathize with our weaknesses, but one who has been in all points tempted like we are, yet without sin. 16 Let us therefore draw near with boldness to the throne of grace, that we may receive mercy and may find grace for help in time of need. 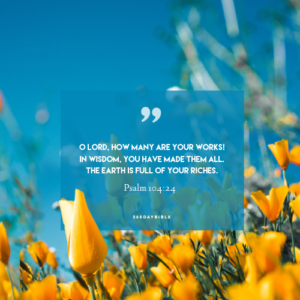 24 How manifold are your works O Lord!
In wisdom, you have made them all.
The earth is full of your riches.
25 There is the sea, great and wide,
in which are innumerable living things,
both small and large animals.
26 There the ships go,
and leviathan, whom you formed to play there.

27 These all wait for you,
that you may give them their food in due season.
28 You give it to them, and they gather.
You open your hand, and they are satisfied with good things.
29 You hide your face, and they are troubled.
You take away their breath, and they die and return to the dust.
30 You send forth your Spirit, and they are created.
You renew the face of the earth.

31 Let the glory of the Lord endure forever.
May the Lord rejoice in his works.
32 He looks at the earth, and it trembles.
He touches the mountains, and they smoke.
33 I will sing to the Lord as long as I live.
I will sing praise to my God while I have any being.

34 Let my meditation be sweet to him.
I will rejoice in the Lord.
35 Let sinners be consumed from the earth.
Let the wicked be no more.
Bless the Lord, O my soul.
Hallelujah!

27 Whoever digs a pit shall fall into it.
Whoever rolls a stone, it will come back on him.