3 The Philistines stood on the mountain on the one side, and Israel stood on the mountain on the other side, and there was a valley between them. 4 A champion out of the camp of the Philistines named Goliath, of Gath, whose height was 9’9″ went out. 5 He had a helmet of bronze on his head, and he wore a coat of mail, and the weight of the coat was 125 pounds of bronze. 6 He had bronze shin armor on his legs and a bronze javelin between his shoulders. 7 The staff of his spear was like a weaver’s beam, and his spear’s iron head weighed 15 pounds. His shield bearer went before him. 8 He stood and cried to the armies of Israel and said to them, “Why have you come out to set your battle in array? Am I not a Philistine, and you, servants to Saul? Choose a man for yourselves and let him come down to me. 9 If he is able to fight with me and kill me, then will we be your servants, but if I prevail against him and kill him, then you will be our servants and serve us.” 10 The Philistine said, “I defy the armies of Israel today! Give me a man, that we may fight together!”

12 Now David was the son of that Ephrathite of Bethlehem Judah, whose name was Jesse, and he had eight sons. The man was an elderly old man in the days of Saul. 13 The three oldest sons of Jesse had gone after Saul to the battle, and the names of his three sons who went to the battle were Eliab the firstborn, and next to him Abinadab, and the third Shammah. 14 David was the youngest, and the three oldest followed Saul. 15 Now David went back and forth from Saul to feed his father’s sheep at Bethlehem.

17 Jesse said to David his son, “Now take for your brothers an ephah of this parched grain, and these ten loaves, and carry them quickly to the camp to your brothers, 18 and bring these ten cheeses to the captain of their thousand and see how your brothers are doing and bring back news.” 19 Now Saul, and they, and all the men of Israel, were in the valley of Elah, fighting with the Philistines. 20 David rose up early in the morning and left the sheep with a keeper and took the supplies and went, as Jesse had commanded him. He came to the place of the wagons, as the army which was going out to the fight shouted for the battle.

21 Israel and the Philistines put the battle in array, army against army. 22 David left his baggage in the hand of the baggage keeper and ran to the army, and came and greeted his brothers. 23 As he talked with them, behold, the champion, the Philistine of Gath, Goliath by name, came up out of the ranks of the Philistines, and said the same words, and David heard them.

24 All the men of Israel, when they saw the man, fled from him, and were terrified. 25 The men of Israel said, “Have you seen this man who has come up? He has surely come up to defy Israel. The king will give great riches to the man who kills him and will give him his daughter and make his father’s house free in Israel.”

26 David spoke to the men who stood by him, saying, “What shall be done to the man who kills this Philistine and takes away the reproach from Israel? For who is this uncircumcised Philistine, that he should defy the armies of the living God?”

28 Eliab his oldest brother heard when he spoke to the men, and Eliab’s anger burned against David, and he said, “Why have you come down? With whom have you left those few sheep in the wilderness? I know your pride and the evil of your heart, for you have come down that you might see the battle.”

29 David said, “What have I now done? Is there not a cause?” 30 He turned away from him toward another and spoke like that again, and the people answered him again the same way.

31 When the words were heard which David spoke, they rehearsed them before Saul, and he sent for him.

33 Saul said to David, “You are not able to go against this Philistine to fight with him, for you are but a youth, and he a man of war from his youth.”

34 David said to Saul, “Your servant was keeping his father’s sheep, and when a lion or a bear came and took a lamb out of the flock, 35 I went out after him and struck him, and rescued it out of his mouth. When he arose against me, I caught him by his beard and struck him, and killed him. 36 Your servant struck both the lion and the bear. This uncircumcised Philistine shall be like one of them, since he has defied the armies of the living God.” 37 David said, “The Lord who delivered me out of the paw of the lion and out of the paw of the bear, he will deliver me out of the hand of this Philistine.”

Saul said to David, “Go! The Lord will be with you.” 38 Saul dressed David with his clothing. He put a helmet of bronze on his head, and he clad him with a coat of mail. 39 David strapped his sword on his clothing, and he tried to move, for he had not tested it. David said to Saul, “I can’t go with these, for I have not tested them.” Then David took them off. 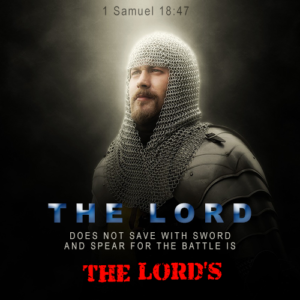 45 Then David said to the Philistine, “You come to me with a sword, with a spear, and with a javelin, but I come to you in the name of God of Armies, the God of the armies of Israel, whom you have defied. 46 Today, the Lord will deliver you into my hand. I will strike you and take your head from off you. I will give the dead bodies of the army of the Philistines today to the birds of the sky and to the wild animals of the earth, that all the earth may know that there is a God in Israel, 47 and that all this assembly may know that the Lord does not save with sword and spear, for the battle is the Lord’s, and he will give you into our hand.”

22 The Jews therefore said, “Will he kill himself, because he says, ‘Where I am going, you cannot come’?”

25 They said therefore to him, “Who are you?”
Jesus said to them, “Just what I have been saying to you from the beginning. 26 I have many things to speak and to judge concerning you. However he who sent me is true, and the things which I heard from him, these I say to the world.”

27 They did not understand that he spoke to them about the Father.

28 Jesus therefore said to them, “When you have lifted up the Son of Man, then you will know that I am he, and I do nothing of myself, but as my Father taught me, I say these things. 29 He who sent me is with me. The Father has not left me alone, for I always do the things that are pleasing to him.”

How Majestic are His Works

I will give thanks to the Lord with my whole heart,
in the council of the upright, and in the congregation.

2 The works of the Lord are great,
pondered by all those who delight in them.
3 His work is honor and majesty.
His righteousness endures forever.
4 He has made his wonderful works to be remembered.
The Lord is gracious and full of compassion.
5 He has given food to those who fear him.
He always remembers his covenant.

6 He has shown his people the power of his works,
in giving them the inheritance of the nations.
7 The works of his hands are truth and justice.
All his precepts are sure.
8 They are established forever and ever.
They are done in truth and uprightness.
9 He has sent redemption to his people.
He has ordained his covenant forever.
His name is holy and awesome! 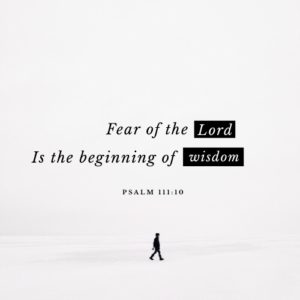 The fear of the Lord is the beginning of wisdom.
All those who do his work have a good understanding.
His praise endures forever!

11 Sheol and Abaddon are before the Lord—
how much more then, the hearts of the children of men!